Ola Electric scooter variants: What features do you get? 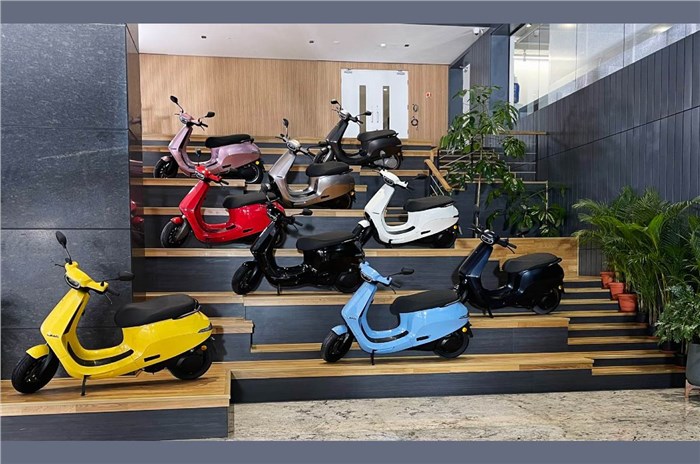 The new Ola scooters have a set of features seen for the first time on a scooter.

Ola’s latest S1 and S1 Pro scooters have just been launched with prices starting at Rs 99,999. If you haven’t yet heard of these scooters, click here to read all about them. This article is focused on the vast range of features available to customers with these new scooters.

The Ola electric scooter is packed with features, but we’ll begin with the ones that have an effect on the riding experience. Both the Ola S1 and the Ola S1 Pro get a reverse mode, which is standard fare on EVs these days. However, the S1 Pro also gets hill hold and cruise control - both of which are usually seen on expensive premium motorcycles.

Other interesting features on both include a brake pad wear sensor (for service alerts) and an electronic handlebar lock. The electronic lock works in conjunction with a proximity sensor that automatically locks and unlocks the scooter based on how close you are to it. This works via the Ola Electric app and the user’s smartphone, but the scooter can also be unlocked with a security code in case the user’s smartphone is lost, or its battery is dead.

A majority of the features are baked into the scooter’s 7-inch TFT-touch screen, while others are enabled via the Ola Electric app. The screen itself gets Ola’s new, in-house developed Move OS and it’s powered by an octa-core processor with 3gb of ram. This computer (tablet?) has 4g, WiFi and Bluetooth connectivity, although Ola hasn’t mentioned who the service provider is and whether it is free or via a subscription model. For reference, the recently revealed Simple Energy Simple One scooter claims to offer lifetime connectivity for no extra cost. Customers can also use the Ola Electric app to call for roadside assistance or set up a home service.

With its smartphone-esque brain and operating system, Ola is attempting to give users a smartphone experience through the display. It comes with what the company calls ‘moods’ which change the appearance and layout of the screen. These moods also change the way the scooter sounds, but unlike the Revolt RV400 which copies the sound of petrol vehicles, the Ola creates different sounds for its electric motor- some of which are quite sci-fi sounding. Customers also have the option to set-up the screen layout to their liking and make the scooter completely quiet.

Ola claims to have navigation built into the system with real-time traffic alerts, although the company hasn’t revealed which map provider these are from. The screen also lets owners set up multiple user profiles with the ability to set an area limit, speed limit, time fence, or restrict access to the riding modes. Speaking of which, the base S1 gets two riding modes - Urban and Sport, while the S1 Pro gets an additional Hyper mode.

A unique feature in this scooter is that it has built-in speakers that claim to be able to play music or support phone calls. The company says the scooter has a multi-microphone array and AI speech recognition algorithm that enables voice control, although this is only available on the Ola S1 Pro.

Many of these features are unheard of on vehicles at this price point and we’re keen to see how they function in reality. We hope to get our first ride of the Ola scooter in the first half of September 2021.