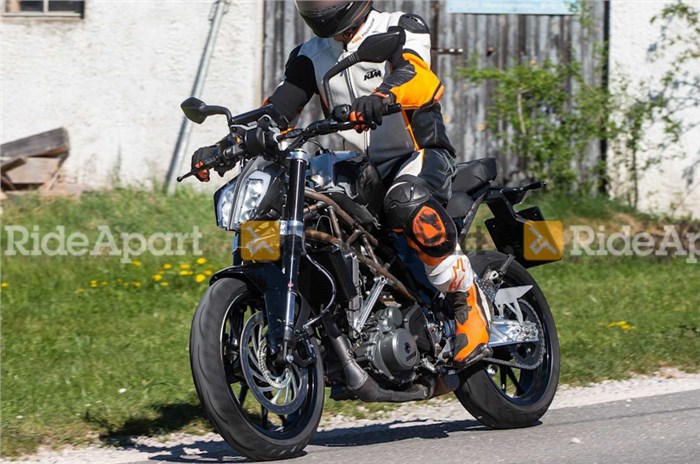 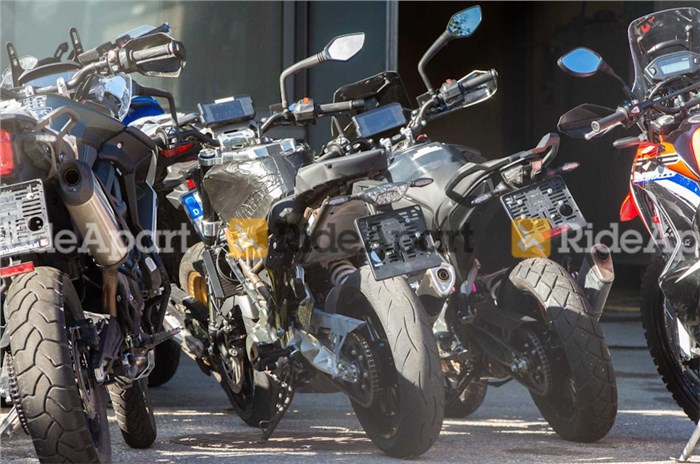 The test mule spotted was using a completely different frame and swing arm, signifying that a massive change is coming.

The KTM 390 Duke first emerged in 2012 and the second-generation model broke cover in 2016. Now, spy shots have emerged of what is almost certainly the third-generation 390 Duke on test, and keeping with the previous timeline, you can expect to see this model at the 2020 EICMA motorcycle show in Milan.

An international website, Ride Apart, has got its hands on several images that show an early stage 390 Duke prototype out on test. At first glance, the bike looks quite similar, as it’s wearing what appears to be the same LED headlamp and TFT instrument console from the current 390 Duke, as well as the same mirrors and switchgear. But these items are largely aesthetic in nature and they can be changed later. What’s different, and clearly on display, though, is the fact that the test bike is running a completely different chassis.

A glance at the test bike image, and then a current 390 Duke, shows that the test bike is running a brand-new trellis frame, with more closely and evenly spaced tubes. It's not completely clear, but the frame could be a little larger as well. It’s also hard to tell whether the rear subframe is different, though, thanks to the black plastic cladding along the side.

However, what’s easy to spot is the new aluminium swing arm. It's not just the bare aluminium finish that’s changed, but the bracing within is different as well; also, the swing arm does look slightly more substantial at the point where it widens near the tyre’s edge. As for the tyres, they’re still the good old Metzeler M5 Sportecs and we have no issues with that.

The rest of the bike is clearly in a very early prototyping stage, so it would be hard to make accurate predictions of what to expect. What we can tell is that the fuel tank appears to be a little larger and wider and this could filter down to the production bike. 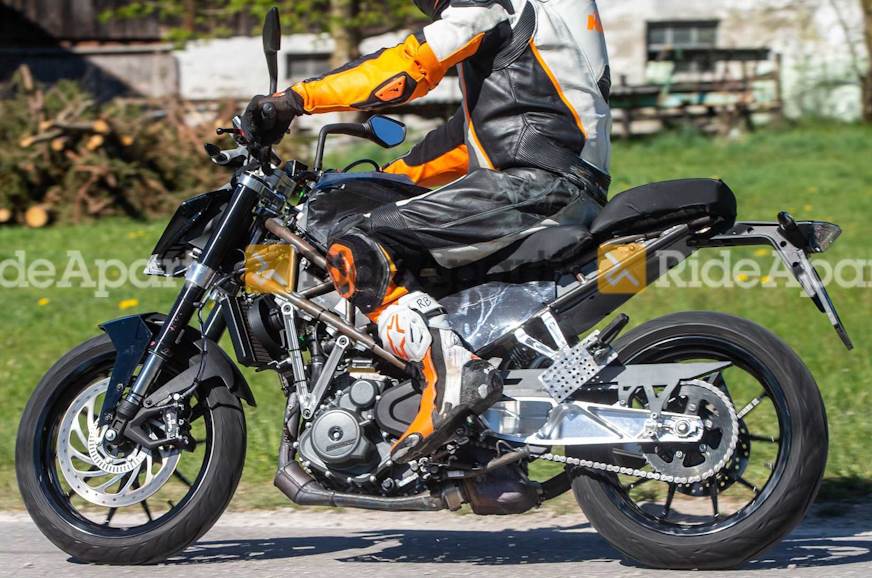 What little is visible of the rear shock indicates that it is still white, just like the current one, but there is something going on with the front WP-branded suspension. The fork appears quite similar, but there is some adjustability visible at the top. Whether this is just for easy tuning for the engineers to get the setup right, or whether we might be seeing some level of adjustability (the upcoming 390 Adventure appears to have some kind of adjusters, probably pre-load, on its fork caps), remains unclear.

So, what about the drivetrain? Well, what we can see of the lower engine block and casing appears to be the same, but the Ride Apart article mentions that there will be changes to the head and the exhaust system as well. The exhaust changes are understandable, given the demands of stricter emission/sound norms in the future, but the possible engine tweaks don’t come as a surprise either.

Ever since it was showcased in 2012, the KTM 390 Duke has essentially been sold in a similar spec, with only the addition of ride-by-wire and a different air box that liberated 2Nm of torque in the second-generation model. When the bike debuted, its 43.5hp and light weight made it the undisputed sub-400cc performance leader, but rivals like the near-50hp Kawasaki Ninja 400 have taken the game forward.

KTM might find extra motivation to challenge the Kawasaki, thanks to new sub-400cc racing championships that have become popular as rookie championships in recent years. The most famous of these is the World Supersport 300 championship that was won by Ana Carrasco last year on, you guessed it, a Kawasaki Ninja 400.

KTM has always been a bit of trendsetter with its small bikes, and it won’t be surprising to see them move the game forward with the likes of some suspension adjustability and maybe even the inclusion of higher-spec electronic assists like traction control. In fact, KTM CEO, Stefan Pierer, was once quoted as saying all KTM’s, even the 125cc models, will eventually get cornering ABS, and we’re comfortably confident in wagering that the feature could debut on this model.

So, when do we expect to see this bike? Well, an updated RC 390 was also spied testing recently and that bike is in much stronger need of an update. That’s because it never got the same ‘2nd gen’ visual upgrade that the Duke did; although, the platforms underneath are quite the same. We believe that the RC spied earlier may actually debut sooner, but the third-gen KTM 390 Duke you see here is still some time away, and it probably won’t be until 2021 that you can actually buy one. Nevertheless, we now know that there’s potentially a bigger, faster and more advanced 390 Duke on the horizon, and that’s very happy news indeed.