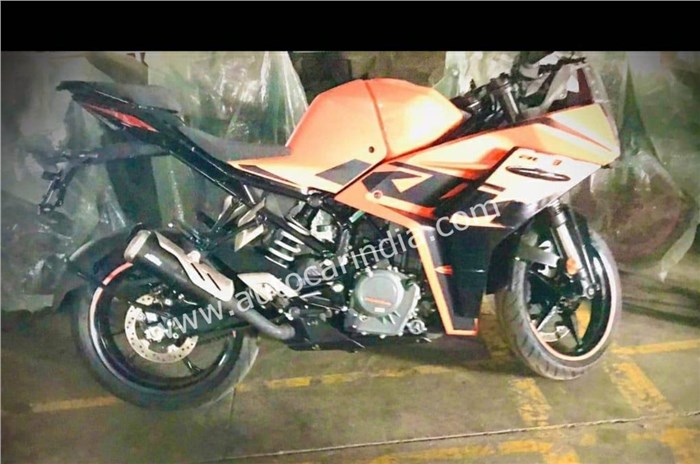 With an official launch expected very soon, the updated RC 390 has been spotted in production form for the very first time.

The 2022 KTM RC 390 has been spotted undisguised for the first time, kicking off the week with a rather orange bang.

The updated KTM RC 390's long and eventful journey from inception to production seems to be nearing an end, with this recent spy shot showing a rear number plate hanger, side reflectors and even a production colour scheme. The most apparent difference to the current bike is the new look that the 2022 model sports. Now the photo here isn't quite clear enough to discern any 390 badging, but the fact that it wears Metzeler rubber hints to us that this is the flagship in the RC lineup.

Though not visible in this particular picture, we know that the RC will forego its mean-looking twin projector headlight setup in favour of a single, central LED unit. The new headlight is remarkably similar in shape to the one seen on the 390 Duke and gives the updated RC 390 a distinct RC8 vibe. It's complemented by a pair of pretty snazzy DRLs that run along the edge of the front fairing.

Out from under the veil of disguise, the new RC seems to address some of the issues created by the current bike's rather strong focus. The fuel tank, for one, seems to be considerably larger than the 9.5-litre unit that the present bike has to make do with. And while the current-gen RC has endeared itself to hardcore enthusiasts with its no-nonsense supersport riding position, it hasn't quite won favour with the average Indian office-goer. Which is probably why the bike in this spy shot seems to feature a bit more relaxed ergonomics, shifting slightly towards the sport-tourer region.

The handlebars are higher up and the foot pegs seem to be slightly more forward-set, which should make the RC more comfortable across the board. A lot of the RC's wow factor comes from the sleekly-integrated pillion seat that makes it look almost like a single-seater. However, the updated bike appears to feature a much more conventional perch for the passenger, and we can only assume that the trade-off is greater pillion comfort. The signs do point towards this, because the pillion foot pegs also seem to be more forward-set than before.

Rounding out the updated appearance are the new RC's redesigned fairings. Though they do carry on with the double-layer theme, they're not quite as expansive as those seen on the current bike, and overall, the updated RC doesn't appear quite as sharp and race-y as the one currently in showrooms.

The updated bike does seem to feature a bolt-on subframe in contrast to the earlier welded-on design. This is good news, because if you have a crash that bends only the subframe, the bike is no longer a write-off. Just like its predecessor, this bike gets an upside-down fork, directly-mounted monoshock and braced alloy swingarm. That being said, we do expect little tweaks and internal modifications to the suspension units, and if the rest of the design philosophy is anything to go by, the new bike should offer a more comfortable ride.

There's new wheels and brakes at both ends, with the front brake disc mounting system looking particularly swanky. Braking was an Achilles' heel when the RC was first unleashed upon us back in 2014, but KTM has steadily plugged away at the issue and the current bike now offers a pretty commendable setup. We hope this updated version brings further improvement in this department.

As for the engine, not much seems to have changed on the 373cc single-cylinder mill. The side covers and engine block appear pretty identical, as does the exhaust routing, so don't expect any drastic changes to the 43.5hp and 36Nm output figures. What you can hope for instead is improved reliability. With this engine having been around for nearly a decade now, KTM should have had ample opportunity to fix its little niggles.

There’s also a good chance that the new RC 390 can bring in some of the more advanced features seen on the 390 Adventure, including the bi-directional quickshifter and perhaps even the lean angle sensitive ABS and traction control. All this will most likely be controlled via a Bluetooth-enabled colour TFT display.

The overall completeness of the bike in this picture leads us to believe that an official launch should be in the coming months. That being said, things are pretty unpredictable in the auto industry right now, so don't be surprised if COVID-19 throws a spanner in the works. As and when it does arrive, we expect the updated RC 390 to carry a price tag of around Rs 2.75 lakh, making it Rs 10,000 or so more expensive than the outgoing model.