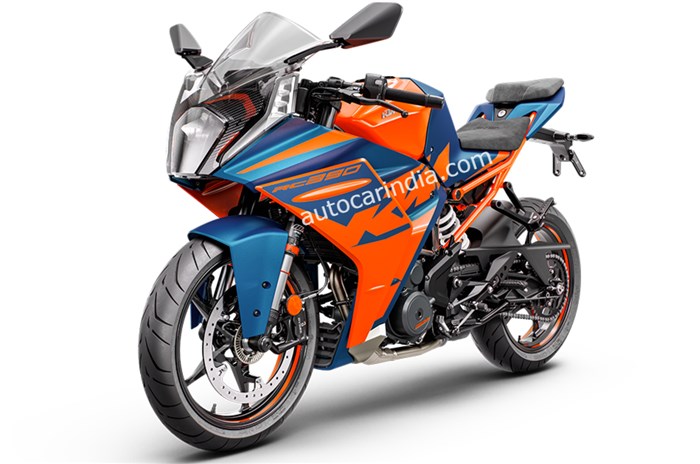 Will get adjustable suspension, TFT display and Bluetooth connectivity.

After months of spy shots, official images of the new KTM RC 390 seem to have leaked online.

We’ve already gotten multiple blurry peeks at the upcoming next-generation KTM RC bikes, and now, official images of the 2022 RC 390 appear to have been leaked online. And with them, loads of interesting details have come to the surface.

For starters, the fork tops on the front suspension of the new RC seem to sport adjusters – not just one, but two. There’s one adjuster on each fork top – one red and the other white. This is exactly like the international-spec KTM 390 Adventure, which features adjustable compression and rebound damping for the front fork. So, it’s likely that the new RC 390 could get the same adjustability. As before, rear suspension is expected to feature preload adjustability, and might also have rebound damping as seen on the international-spec 390 Adventure.

However, this also brings up the question about whether KTM will offer this suspension adjustability in India, or remove the feature as they have done on the 390 Adventure.

Next up is a large display that’s almost certain to be a TFT unit like that on the 390 Duke. This would mean a crisp and informative screen with Bluetooth connectivity, and as a result, turn-by-turn navigation as well as controls for phone calls and media playback. 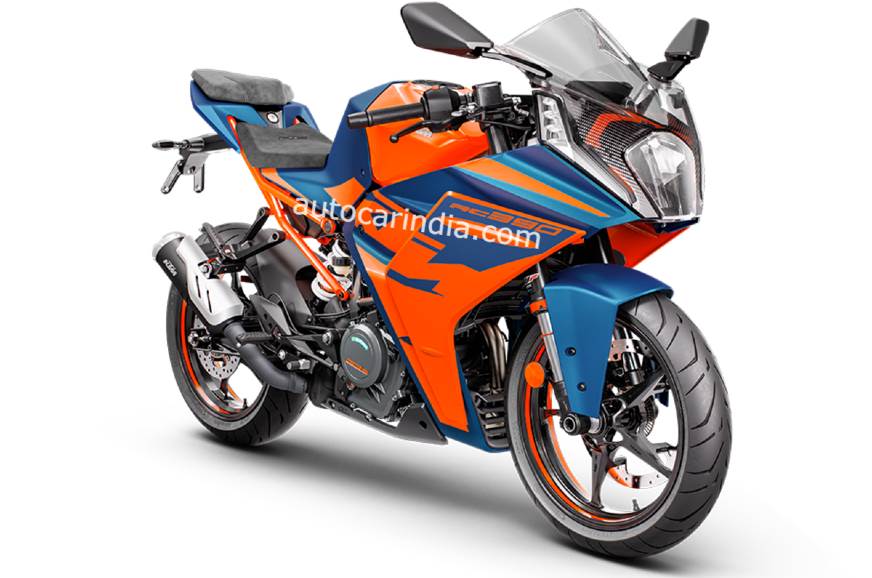 The design is pretty similar to what we’ve seen in spy shots so far but looks vastly better and more proportionate in this seemingly final colour scheme. The front fairing around the headlight seems to sport a carbon-fibre finish, but a finish is probably all it is, and the RC is unlikely to get actual carbon-fibre at this price point. The windscreen does seem to be a little taller than the one on the present RC range. The two slim lights on the side of the headlamp are likely to function as indicators, but perhaps may also serve as pilot lights.

The seats are now split units and while the rider perch still looks quite sporty, it also appears to be flatter and better padded, both of which the current RC390 needed.

The top triple-clamp is new, as are the clip-on handlebars, and the rear subframe is now a bolt-on unit. The clip-ons seem to be higher than on the current bike, which should make for a more comfortable riding position, while the bolt-on design of the subframe should make accidental repairs easier and cheaper (should it bend or break in a crash). The new wheels are wrapped in Continental ContiRoad sport touring tyres - the same as seen on the international spec 890 Duke. Whether we get these tyres in India or if KTM continues with the Metzeler M5s is still to be confirmed.

In the engine department, things appear to be relatively unchanged, with even the engine covers looking identical to the current bike. While the block seems untouched, the peripherals have been reworked, namely the cooling and exhaust systems. While it’s hard to be certain from these pictures, it does appear that the new RC will get two radiator fans in place of the current bike’s one. The exhaust system will continue to feature a side-slung end-can, but its design is different to the one currently used, and the mesh on the exhaust exit is noteworthy. It’s also quite likely that the new RC will feature a basic bi-directional quickshifter, like the current-gen 390 Adventure and 390 Duke.

While the initial response to the new RC has been a little lukewarm, these new pictures should be able to flip most people around. After all, KTM appears to have addressed some of the biggest customer complaints of the current bike – things like seating comfort and engine heating, and the new design looks quite eye-catching in this final form as well, with more than a hint of the original RC8.