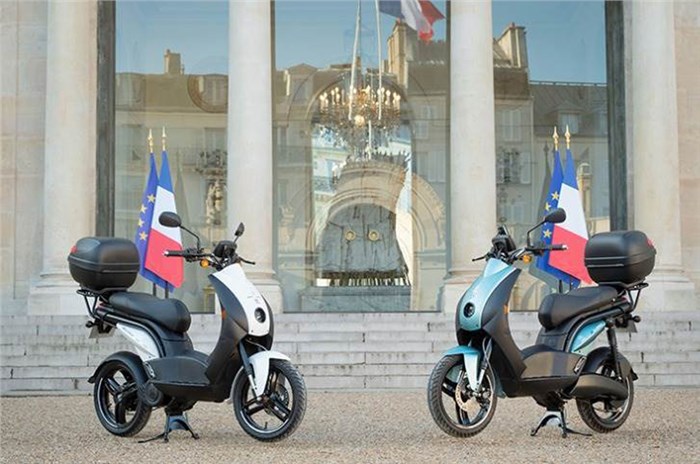 Electric scooter to initially be used to transport packages and documents between various sections at the official residence of the French president.

It was two months ago that Mahindra & Mahindra's two-wheeler arm exported its first batch of made-in-India electric Peugeot e-Ludix two-wheelers to Mahindra-owned subsidiary Peugeot Motocycles. Manufactured at its plant in Pithampur, Madhya Pradesh, the e-Ludix became the first electric two-wheeler to be exported to the European Union.

Now, it is learnt that the electric Ludix was headed to the Palais de l’Elysée, the official residence of the French president. On November 12, Peugeot Motocycles tweeted: "The Peugeot Motocycles team is proud to be part of the energy transition to the top of the French State! Our new scooter, Peugeot e-Ludix, is the first 2-wheel electric vehicle that joins the fleet of the prestigious Palais de l’Elysée."

It was followed by a tweet by Prakash Wakankar, who handles the Mahindra Group's international operations for farm equipment and global two-wheeler business: "Our brand new vehicle, the Peugeot e-Ludix, is the first electric 2-wheeler to join the fleet of the prestigious Palais de l’Elysée" and from Anand Mahindra, chairman, Mahindra Group, "Peugeot Motocycles (a @MahindraRise company) is part of the ‘energetic’ transformation of the French Presidential fleet! Our brand new Peugeot e-Ludix, is the 1st electric 2-wheeler to join the fleet. And they’re proudly the 1st electric 2-wheelers exported from India."

It is learnt that the two fourth-generation Peugeot e-Ludix scooters will initially be used to transport small packages and documents between the various sections of the presidential palace. If they are successful in meeting the required functionalities, the e-Ludix fleet could be expanded in the future.

The 3kW e-Ludix is in the 50cc-equivalent scooter category, with top speed limited to 45kph. It weighs only 85kg, of which 9kg constitutes the Bosch lithium-ion battery. The e-Ludix has a range of approximately 50km, and a braking energy recovery system. Charging takes three hours with an external charger.

The e-Ludix is not the first Peugeot at the Élysée Palace, which also has the three-wheeled Peugeot Metropolis. "With the Élysée, we talk to each other regularly. They already have a three-wheeled Peugeot Metropolis in their fleet. We present them our novelties, and we knew that with an electric scooter like ours, they would surely be interested," said Candice Robert, director of communication at Peugeot Motocycles.

Meanwhile, the e-Ludix is set to go on sale in Peugeot Motocycles dealerships from January 2020, while an e-Ludix Pro variant will be introduced subsequently.

Mahindra & Mahindra, which is a forerunner in electric mobility in India, will be looking to expand its footprint in the EU with Peugeot Motocycles. At the end of October, Mahindra Two Wheelers Europe, an M&M subsidiary, and Groupe PSA announced that Mahindra Two Wheelers Europe is to acquire all outstanding shares in Peugeot Motocycles (PMTC), giving total ownership of the French two-wheeler manufacturer to the Indian automaker.

Over four years ago, Mahindra Two Wheelers Europe had acquired a 51 percent equity stake in PMTC from PSA, with the aim of growing the business. Mahindra Two Wheelers Europe and the PMTC team have worked together on reorganising and building the ’Performance 2020’ plan, which was unveiled in July 2018. It lays the foundations to strengthen the company’s operations to achieve future growth in core markets such as the G7 (Europe), while expanding into new geographies, including select Asian markets.

This growth plan is backed by a robust investment plan that includes the launch of seven new products between 2019 and 2021. Under the growth plan, the brand’s presence in Europe is to be fortified, with France remaining a major market and PMTC’s headquarters still based in its historical location, Mandeure.

Will the e-Ludix ever make it to India? Never say never. Mahindra & Mahindra now owns two electric scooter-making companies – Genze in the USA and Peugeot Motocycles in France. Earlier this year, Anand Mahindra had tweeted when the made-in-Pithampur e-Ludix scooters had been exported: "Bon Voyage to our 1st batch of electric 2wheelers – Made in India. A global network helps: they’re being shipped to our subsidiary Peugeot Moto. And though it’s not viable yet to sell our GenZe & Peugeot electric bikes in India, you can count on us being in the game at some point.”