With a Euro-5/BS6 compliant engine, Kawasaki is likely to launch the Ninja 400 in India. 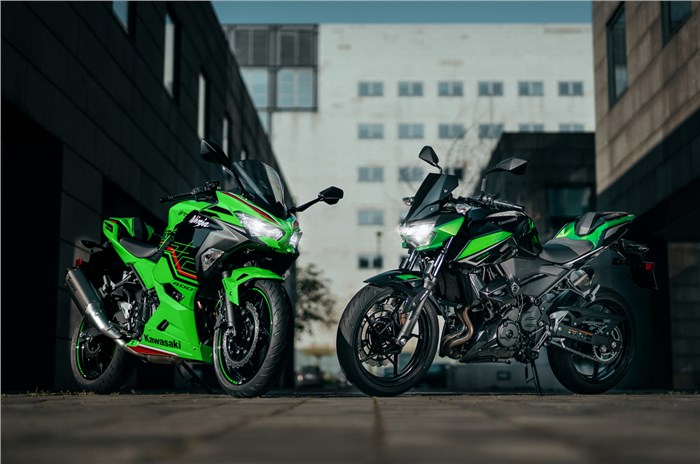 Kawasaki has unveiled the 2023 Ninja 400 and Z400 in European markets. The big news, however, is that the engines in both motorcycles are now Euro-5 compliant. This effectively means the Ninja 400, which was discontinued in India when the BS6 emissions norms kicked in, may be relaunched.

The 2023 Kawasaki Ninja 400 and Z400 are powered by a 399cc, liquid-cooled, parallel-twin engine that makes 45hp and 37Nm. While the power figures are the same as before, peak torque has dropped by 1Nm. The effect of this minor dip in peak torque on overall performance should be negligible, considering that the kerb weight of both motorcycles is the same as before.

Another important update to the Ninja 400 is a 20 percent lighter slip and assist clutch, which Kawasaki says reduces effort while changing gears.

Kawasaki hasn't made any changes to the bodywork, trellis chassis and suspension and the bikes get a telescopic fork and a preload adjustable monoshock. Braking is taken care of by a 310mm petal disc at the front and a 220mm disc at the rear.

The only visual differences are the new colours on both bikes, with the Ninja 400's Kawasaki Racing Team livery looking rather fetching.

All said, Kawasaki could've used this opportunity to replace the analogue-digital instrument cluster of the Ninja 400 with a modern, colour TFT unit.

As mentioned earlier, the unveiling of the Euro-5 compliant Ninja 400 gives hope that Kawasaki India might bring it here. Our only wish is that the company doesn't price it as absurdly as the Rs 4.69 lakh (ex-showroom, India), it asked for the previous bike.