Motorcycle enthusiasts have a lot to look forward to. We take you through the list of expected launches. 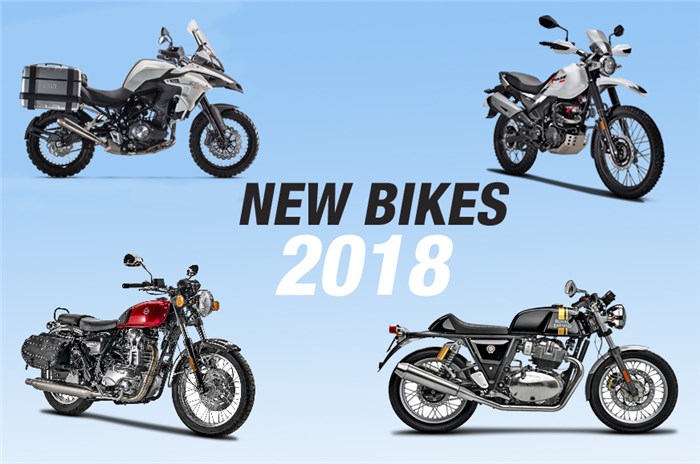 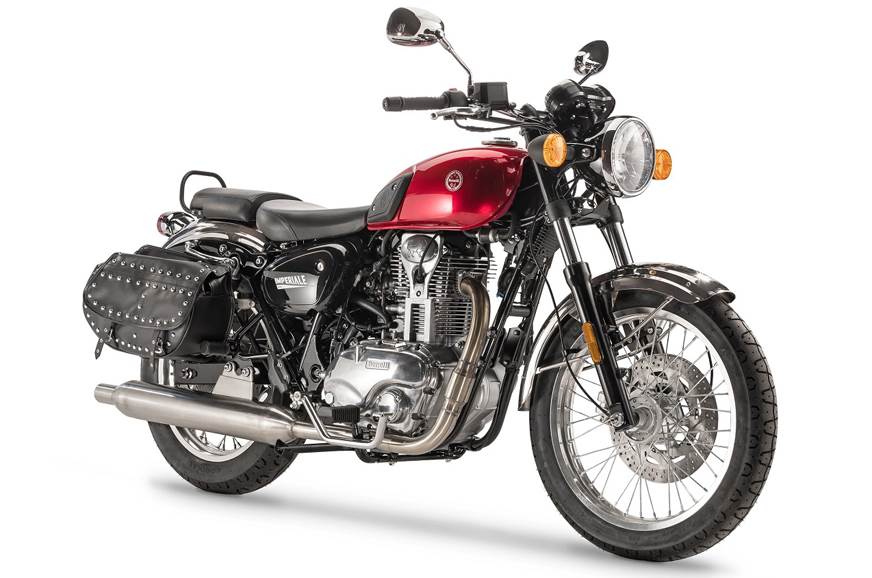 The Imperiale 400, showcased at EICMA 2017, is Benelli’s Royal Enfield challenger. It’s powered by a 373.5cc, air-cooled, SOHC, single-cylinder engine that produces 19.7hp at 5,500rpm and 28Nm of torque at 3,500rpm. This torquey motor is fuel-injected (with a Delphi ECU) and is paired to a five-speed transmission. The motorcycle rests on a tubular steel, double-cradle frame and implements a 41mm telescopic fork and twin shock absorbers. Braking duties are performed by a 300mm single disc with a two-piston floating caliper and a 240mm rear disc with standard ABS. The Imperiale runs a 19-inch front and 18-inch rear wire-spoke wheel combination, which gels with the bike’s appealing design. The seat height is pegged at 780mm, which should make it an ergonomic delight for a wide range of motorcyclists. It is expected to hit the Indian market in 2018 with a price of around Rs 2 lakh. The Imperiale 400’s timeline is now uncertain given the recent legal troubles faced by the owners of DSK-Motowheels. 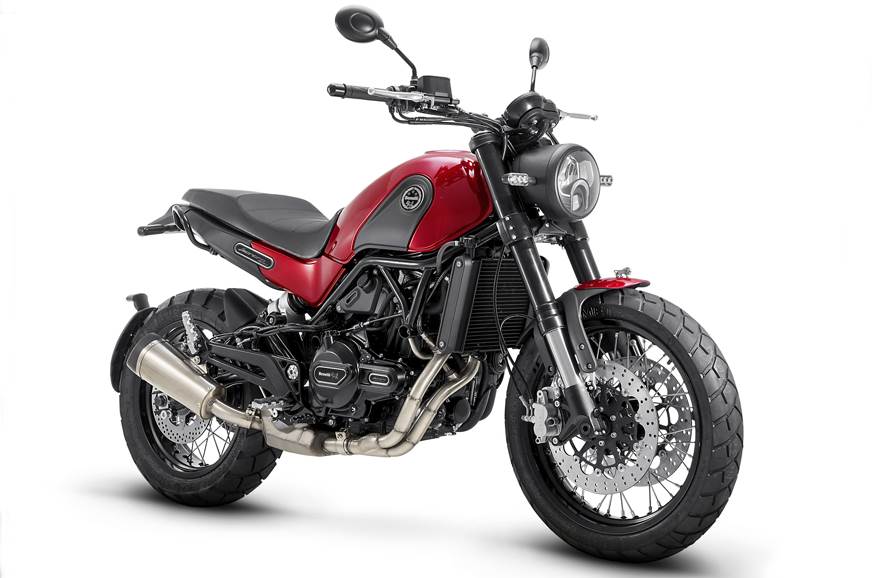 The Leoncino is powered by a 499.6cc, liquid-cooled and fuel-injected, parallel-twin that produces 49.6hp at 8,500rpm and 45Nm at 5,000rpm. This engine is paired to a 6-speed transmission and features a wet clutch. Typical of Benellis, the Leoncino sports top-notch cycle parts. The engine is housed within a tubular steel-trellis frame and the bike sits on 17-inch wheels at both ends. Pirelli Angel ST tyres will be standard (120/70 R17 up-front, 160/60 R17 at the rear). The fork is a 50mm USD unit while the rear gets a monoshock with 112mm of wheel travel. ABS is standard and it gets a 320 mm twin-disc setup with 4-piston calipers at the front, with a 260mm disc (with a single-piston caliper) at the rear. Its 785mm seat height and 145mm of ground clearance will make it accessible; but like all Benellis, the Leoncino is a hefty motorcycle at 207kg and this will, no doubt, blunt performance. The 13.5-litre fuel tank might prove to be a tad small for highway runs but this will certainly be compensated by the involving riding package the Leoncino promises to be. The motorcycle (in road-biased guise) was recently spied on test in the country and this is the only version which will go on sale in India. A market launch is expected to be delayed considering the recent legal troubles faced by DSK-Motowheels. 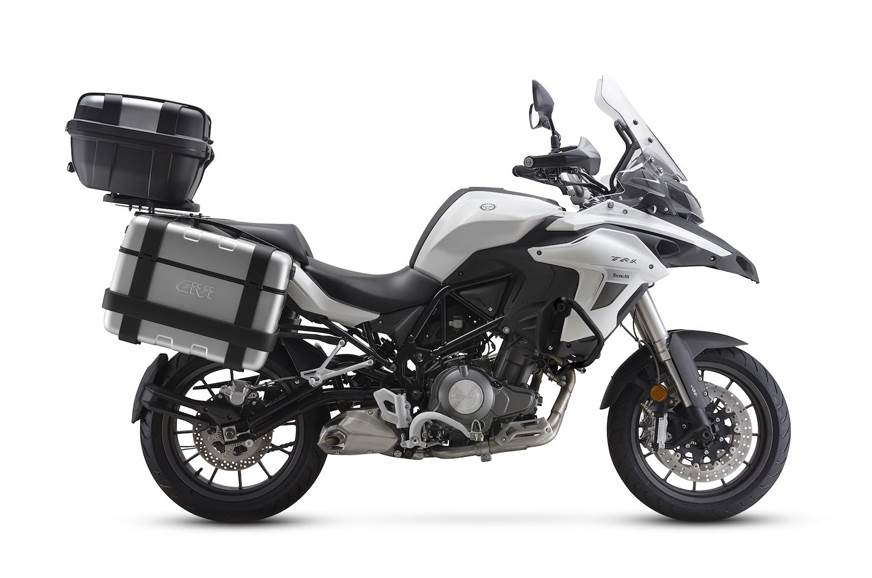 Benelli had first showcased the TRK 502 at EICMA 2015 in Milan, Italy, and now we are inching closer to seeing this motorcycle available at showrooms, here. It sports that typical adventure-motorcycle look with its large, beaked front-fairing and tall stance. The TRK 502 will come equipped with a 499cc parallel-twin, liquid-cooled engine that churns out 46.9hp of power and about 45Nm of torque. Besides these figures being quite appropriate for our Indian riding conditions, the TRK 502 will also be available in two different setups. There will be one road-oriented model with 17-inch rims at the front and rear, and one model equipped with a 19-inch rim upfront to assist in off-road duties. ABS will come as standard on both models. These figures are quite appropriate for the Indian conditions, but the weight of 210kg is going to be a bit of a performance dampener. As with the other Benelli bikes, this one's arrival date is also now uncertain. 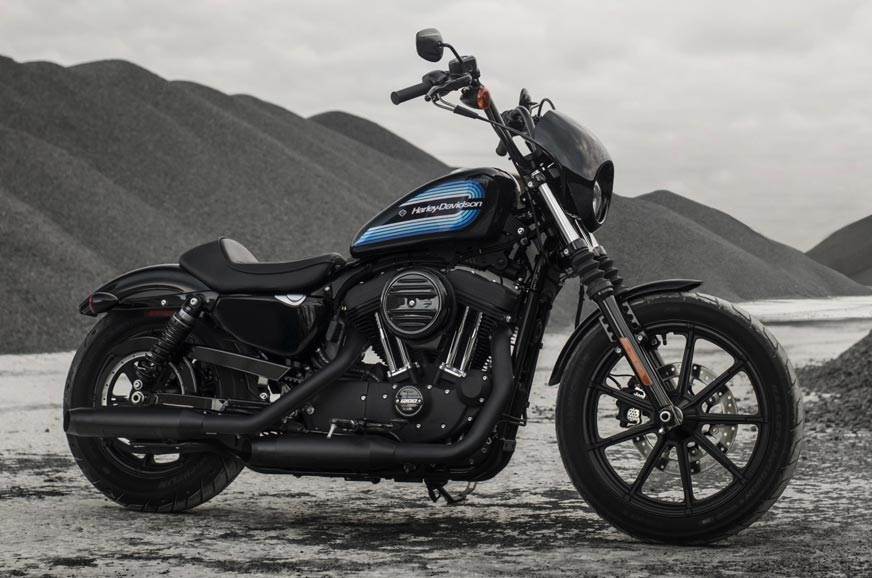 The Iron 1200 carries on the design first seen in the Iron 883, but brings a bigger 1,202cc motor to the table. This results in a claimed increase in torque of 36 percent, from 72.9Nm in the Iron 883 to 98.9Nm in the Iron 1200. The styling is also influenced by original Iron 883, with a blacked-out engine and chrome pushrod tubes. The bike also uses similar nine-spoke, 19-inch front and 16-inch rear wheels as the Iron 883. The Iron 1200 features a raised handlebar that is 812mm wide and with a 165mm pull-back, which should result in a more upright riding position. The Iron 1200 also has a new cowl around the single headlight that isn’t seen on the 883. The bike comes from factory with a single seat and a 12.5-litre fuel tank. ABS and the Harley-Davidson Smart Security System are available as factory-installed optional extras on the US-spec models. The Iron 1200 is the most affordable of the 1200cc Sportster range in the United States. 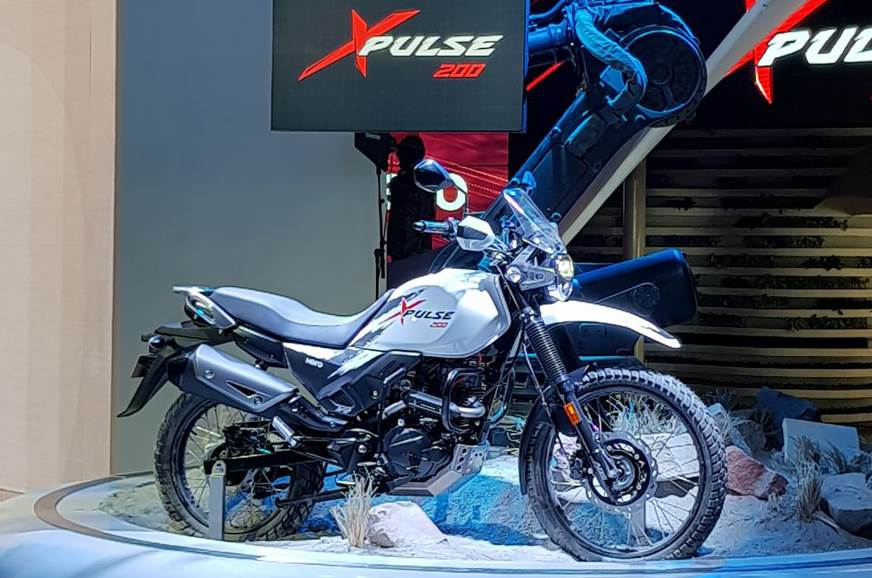 After Hero MotoCorp took the wraps off its much-awaited XPulse concept at EICMA 2017, it made its Indian debut at Auto Expo 2018. The XPulse features a raised front fender and a round full-LED headlight that’s complemented by a windscreen. It gets an enduro-bike-styled handlebar and hand guards as well. Also on offer is a digital instrument console. The fuel tank, with pronounced knee recesses, features a flush-fitting fuel tank cap. The bike features an upright and commanding stance, with a one-piece seat that extends onto the fuel tank – an expected element on an enduro motorcycle. At 825mm, the seat height is decent for the purpose, but it may feel a bit high for shorter riders. The engine on the motorcycle shown was equipped with ample protection – a compact, functional-looking crash guard (in white) and a drilled underbelly bash plate. The XPulse is powered by a 200cc, single-cylinder, fuel-injected motor, which produces 18.4hp and around 17Nm of torque. The exhaust runs close to the right-hand side of the single-cylinder motor and ends in an upswept angle, close to the tail section. The single-downtube chassis featured on the XPulse makes use of a box-section swingarm and a monoshock rear suspension, as well as a smaller disc brake at the rear. This chassis proved itself in terms of frame strength at the Raid de Himalaya rally where it was tested. The XPulse gets a 21-inch front wheel, a single-channel ABS and a telescopic fork with 190mm of travel. The rear, meanwhile, gets an 18-inch wheel and a monoshock with 170mm of wheel travel. 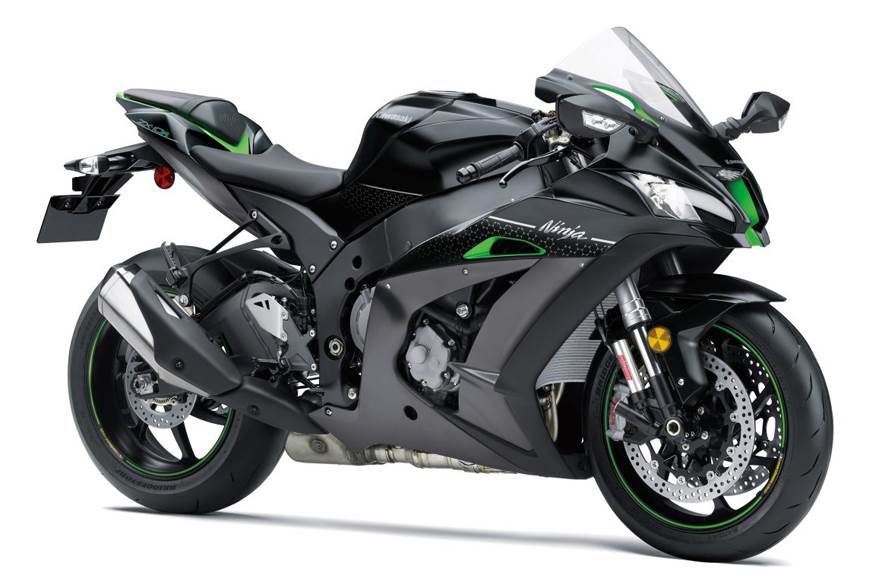 The Kawasaki ZX-10R now has an SE variant that features electronic semi-active suspension derived from the company’s Superbike World Championship race bike. Kawasaki claims that the new ZX-10R SE is loosely derived from Jonathan Rea’s Ninja ZX-10RR race bike. It is equipped with Showa suspension front and rear (Balance Free Front Fork and BFRC-lite shock with the same construction as the suspension on Kawasaki’s WSB Ninja ZX-10RR race machines). It is also the company’s first motorcycle to feature Kawasaki Electronic Control Suspension (KECS) – a technology that has stroke sensors and adjustment solenoids built into the suspension. This tech allows the bike to adapt to both road and riding conditions, and provide the right amount of damping with a reaction time of just one millisecond. Power figures, however, are identical to the 10R – 207hp at 13,000rpm (with ram air) and peak torque of 113.5Nm at 11,500 rpm. We can expect this motorcycle to join Kawasaki’s India line-up soon. 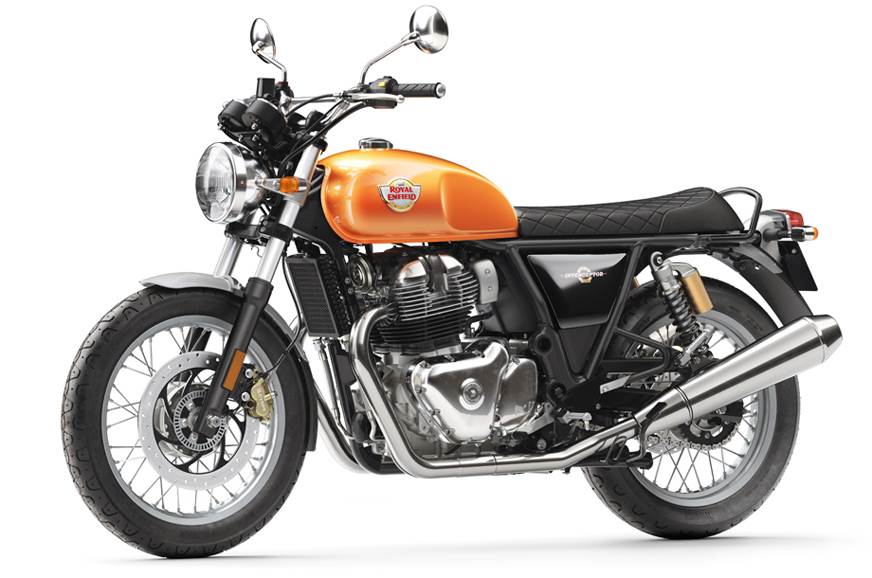 The Continental GT Twin and Interceptor 650 mark the company’s return to twin-cylinder motorcycles. The Interceptor is a highway cruiser with its upright riding stance and regular handlebars. It features a rounded tank with and a flat bench-like seat. The Continental GT Twin, being a cafe racer, features an angular tank, clip-on handlebars and a single seat. Both motorcycles are powered by the same 648cc, air-cooled, SOHC, fuel-injected parallel-twin motor that produces 47hp at 7,100rpm and 52Nm of torque at 4,000rpm, while being paired to a six-speed gearbox with a slip-assist clutch. The suspension, brakes and frame are also common between the two. They use a conventional telescopic fork up front and gas-charged twin shocks at the rear. Both motorcycles are built around the same double-cradle tubular steel frame and get ABS, as standard. The bikes are expected to launch in the third quarter of 2018 and be priced somewhere between Rs 3 lakh to 3.5 lakh. 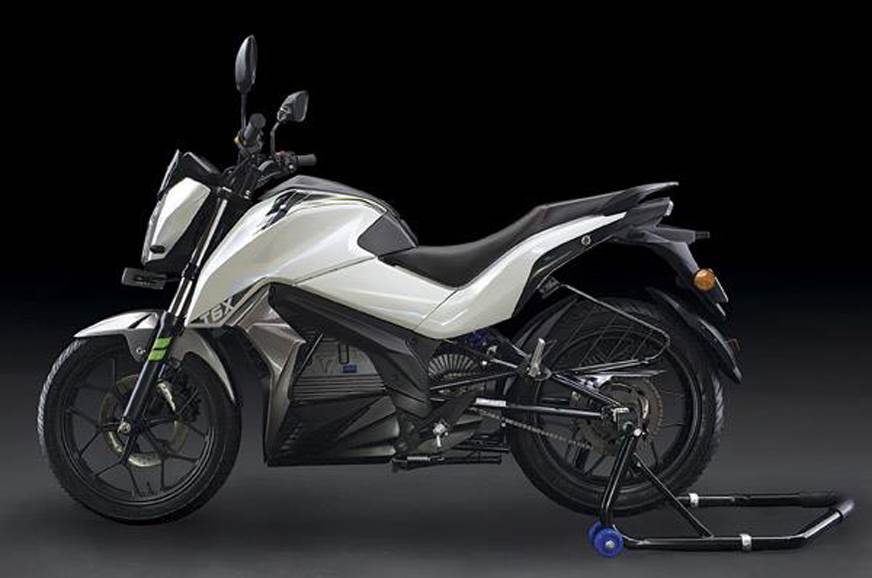 We haven’t forgotten our homegrown Tork Motorcycles – a Pune-based firm working to launch an electric motorcycle in India. Founded by mechanical engineer Kapil Shelke, his passion for racing has seen Tork Motorcycles participate in professional racing, including events like the coveted Isle of Man's TTXGP (electric motorcycle class) to the TT Zero Race. With the T6X, Tork plans to cater to the 125cc commuter bike buyers who are looking for something more premium. While the bike is expected to cost more than its immediate competition, the company claims that the lower running costs of the bike (a full recharge costs Rs 10-20) means that the additional expenses incurred will be easily recovered within a year of purchase. When unveiled, the T6X was expected to deliver a maximum range of over 100km on a single charge, while top-speed was limited to 85kph. Tork has said that besides the increase in range, other performance figures will remain the same. Its Li-ion battery can reach 80 percent charge in one hour when plugged into a 15A source, and will attain full charge in two hours. The highlight of the T6X is its connectivity features. It will get a display with navigation and a Mirror Link-like interface which is compatible with both Android and iOS devices. Tork is still working on testing and validation. It states that a 2018 launch is not entirely off the cards but it cannot comment on that, at this moment.