Yamaha has entered the 125cc scooter segment with the new Fascino, and here’s how it compares to one of the segment leaders, the Honda Activa 125 on paper. 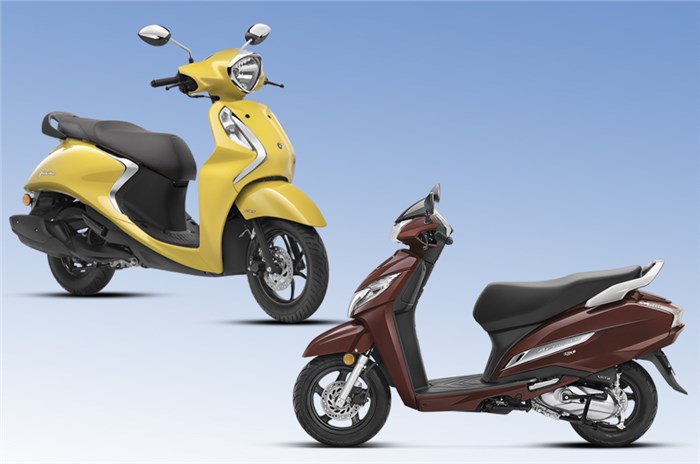 The 125cc scooter segment is currently where it's at. With the launch of the Fascino 125 and the reveal of the Ray ZR 125, Yamaha has become the latest manufacturer to enter this space. What’s bigger news is the fact that the company has said it's shifting its focus to 125cc scooters for the Indian market, and that it will discontinue all its 110cc models when the BS6 deadline kicks in on April 1, 2020. Like the 110cc models, the new Ray ZR still targets the younger audience with its sporty design, while the Fascino 125 is for the more mainstream crowd. This is why we chose to compare the Fascino 125 to the Activa 125, as it’s the only other BS6-compliant 125cc scooter that targets a similar demographic presently. The BS6 Suzuki Access 125 would fit in here quite nicely, but we’ve chosen to not include it because the company hasn’t revealed the price and all the specifications.

The Yamaha Fascino is powered by a new 125cc, fuel-injected, air-cooled engine that produces 8.2hp at 6,500rpm and 9.7Nm at 5,000rpm. These figures are pretty much in the same ballpark as the Activa 125 BS6, but are considerably lower than the 125cc scooters from TVS, Suzuki and Aprilia. What helps the Yamaha is its low 99kg kerb weight, resulting in a higher power-to-weight ratio of 82.82hp per tonne.

The Fascino also left us quite impressed with how refined it felt at low speeds and under full-bore acceleration. This is something the Honda Activa 125 is quite well-known for too. However, only a proper comparison will reveal which is better. What we can’t wait to find out is also how the Fascino’s higher power-to-weight ratio compares on the road.

Like the Activa 125, the Fascino runs a 12-inch wheel up front and a 10-incher at the rear. The tyres sizes, though, are slightly different. While the front tyre remains the same at 90/90, the Fascino gets a wider 110/90 section rear tyre, as compared to the 90/100 one on the Activa. Both scooters are also available with a 190mm disc brake option at the front. The rear brake is a drum-type on both. Also standard on the bikes is the mandatory combined braking system. The slightly longer wheelbase on the Fascino coupled with the wider rear tyre should also result in better high-speed stability when compared to Activa.

As for suspension, both scooters use a telescopic fork up front and a single shock absorber at the rear. The Activa’s shock absorber also features preload-adjustability. Also, the majority of panels on the Honda are made of metal, while it's only the front fender that's metal on the Fascino.

Along with the new BS6 fuel-injected motor, Honda has also added many features to the Activa 125. It gets a ‘noiseless’ starter system, an idle start-stop system, an external fuel-filler cap, a pass-light switch and a front glove box. Another noteworthy feature is the addition of a side-stand-down indicator with an engine inhibitor – this prevents the motor from starting while the side stand is down.

The addition of the fuel-injection system sees the introduction of an ECU into the scooter, which, in turn, gives access to more information about the bike. Honda has made use of this and added a segment-first real-time fuel-efficiency and distance-to-empty display to the instrument cluster.

The Yamaha’s feature list is not as impressive, but it does get silent-start, start-stop, and a side-stand-down engine inhibitor. The instrument cluster is completely analogue and all it displays is the speed, odo, and fuel level. The Fascino's instrumentation also misses out basic features like a trip gauge.

Prices for the Fascino 125 begin at Rs 66,430 for the standard, drum brake version, and go up to Rs 68,930 for the top-spec, disc-brake-equipped Deluxe version. The prices are extremely competitive and the top model is Rs 5,560 less than the top-spec Activa 125. That said, the Activa 125 does offer a much longer feature list, as well as a larger service network.

What we can tell you for now is that if the Honda Activa's longer feature list does impress you, then it's worth the extra cash it demands, but we suggest you stay tuned to Autocar India for a proper comparison before making your choice.