How does Suzuki’s GSX-S750, with its competitive price-tag, compare against its closest competition on paper? 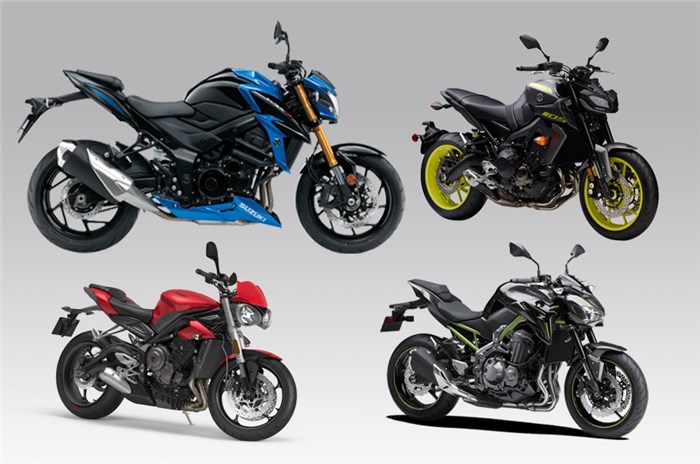 Suzuki has just expanded its performance bike range by launching the new GSX-S750 in India. It is the Japanese bike maker’s second superbike after the Hayabusa to be locally assembled. The S750 is a middleweight sport naked and was first showcased in India at the 2018 Auto Expo. Bookings for the motorcycle have commenced at all Suzuki Big Bikes dealerships across India and the first batch is expected to be delivered next month.

The GSX-S750 being the smaller sibling to the GSX-S1000 shares a lot in terms of design. The headlight on the bike is shaped like the 1000’s but features two smaller parking lights on each side. The bike’s large radiator shrouds and front-heavy design are also inspired from its larger sibling. The tail section of the motorcycle with its aggressive angle and hidden-away tail-light also works well with its overall styling.

Kawasaki changed almost everything to make the evolutionary leap from the Z800 to the Z900 – and it’s fairly evident in the styling, as well. The boxy and angular lines of the Z800 have been ditched for smoother curves. However, the bike is still unmistakably a ‘Z’ and its overall silhouette has been pretty much carried over from its predecessor. The fundamental styling of the Z900 is similar to the GSX-S750; it has a similar front-heavy design with a sharp tail section.

The Triumph Street Triple S is the only non-Japanese motorcycle in this comparison and its styling distinctly shows it. Over the years, the styling on the Triple has only seen minor tweaks – nothing too dramatic. However, in its most recent evolution, the bike got rounded headlights replacing the angular pods on the older motorcycle, while still retaining the insect-like design. The tail section on this British sport naked is sharp but nowhere near the ones seen on the Z900 and GSX-S750.

Yamaha’s MT-09 is, by far, the quirkiest looking motorcycle in this comparison. The middleweight sport naked has an alien-looking front owing to the squinty headlights and large vents on either side of the tank. The tank on this motorcycle is narrow and high-set, which gives this motorcycle a tall stance, almost like a super moto. Towards the rear, the MT-09 has a minimalistic tail that ends much before the rear tyre. The bright-green Z900 and the MT-09 even in its dark colour scheme will both definitely stand out the most on our roads.

The Suzuki is powered by a 749cc, liquid-cooled, DOHC, in-line, four-cylinder motor that makes 114hp and 81Nm of torque. As with all the bikes here, power is transmitted via a six-speed gearbox and suspension duties are taken care of by a 41mm USD fork and mono shock. Braking on the Suzuki is handled by twin 310mm discs, up front and a 240mm rear disc. The S750, at 215kg is the heaviest bike in its segment. Combine this with its 114hp power figure and it has the lowest power-to-weight ratio of 530.2hp/tonne.

Kawasaki’s Z900 is equipped with a 948cc, liquid-cooled, DOHC, in-line, four-cylinder engine that makes an impressive 125hp and 98.6Nm of torque. Braking on the Z900 is taken care of by 300mm twin discs up front and a 250mm rear disc. The Z900 is slightly lighter than the Suzuki at 210kg but it makes a lot more power and this gives it a power-to-weight ratio of 595.2hp/tonne. At 98.6Nm, the Kawasaki Z900 has the most torque among all the bikes here.

The Triumph Street Triple S, on the other hand, is powered by a 765cc, liquid-cooled, DOHC, in-line, three-cylinder motor that puts out 112hp and 73Nm of torque. Braking is taken care of by a 310mm twin discs up front and a 220mm rear disc. With a kerb weight of 187kg, the Triple S is the lightest motorcycle here and this is what gives it the best power-to-weight ratio of 598.9hp/tonne.

Powering the MT-09 is an 847cc, liquid-cooled, DOHC, in-line, three-cylinder motor that makes 115hp and 97.5Nm of torque. Helping the motorcycle slow down are 298mm twin discs up front and a 245mm rear disc. The Yamaha is the second-lightest bike here, which when combined with the 115hp power figure gives the bike a power-to-weight ratio of 595.8hp/tonne – just 0.6hp more than that of the Z900.

This is where the Yamaha MT-09 shines; it is the only bike in this list to offer a LED headlight, slipper clutch and quick shifter. Ride-by-wire, on the other hand, can be found on the MT-09 and the Street Triple S. The S750, Triple S and MT-09 get traction control, as well – which is ironically missing on the most powerful bike here, the Z900. What the Z900 does get is ABS; but then so does every other bike in this comparison.

The Japanese bikes in this list have fully-digital instrument clusters, while the British Street Triple S comes with a digi-analogue unit. None of the displays are full-colour, but they do display all of the necessary information and tell-tale signs one would expect from a bike in this segment.

Does the Suzuki GSX-S750 present a good deal?

Is this the middle-weight sport naked for you? Here’s the thing, as we told you in our review, there isn’t a single stand-out factor to this bike (in this segment) that excites you. It’s powerful, but the Kawasaki Z900 has an additional 11hp and nearly 18Nm more torque, both produced at lower revs. And, of course, there’s the Kawasaki’s superb smoothness and refinement, too. The Triumph Street Triple S meanwhile makes similar power but handles much nicer and it also offers a traction control safety net, even if it's not as intuitive as the one on the GSX-S750. The MT-09 offers 1hp and 6.5Nm of torque more, along with a lot more tech but it comes at a premium of over Rs 2 lakh.

Overall, the GSX-S750 is a sweet-natured motorcycle that will make an encouraging partner for riders that are new to the segment. While there are no outstanding abilities, the Suzuki also leaves you with almost nothing to dislike and it makes for a compelling package. At 7.45 lakh (ex-showroom, Delhi) the Suzuki is also the most affordable bike here, making it a serious contender.