We look at how the Pulsar 150 Classic stacks up in the 150cc commuter segment against the Honda CB Unicorn and Hero Achiever 150. 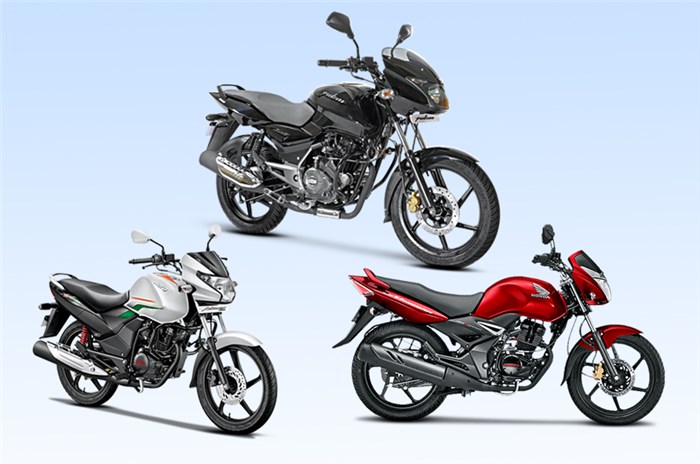 That allows the Classic to compete against the Honda CB Unicorn and the Hero Achiever 150 in the commuter segment.

The absence of tank extensions and stickers gives the 150 Classic a cleaner look than its stablemates. The rest of the design remains unchanged, which means you get the now instantly identifiable Pulsar façade, with a single headlight and two pilot lamps combined into a single cluster. You also get the signature Pulsar twin vertical strip tail-lamps. The Classic is only available in black; and with the engine, exhaust system, chain cover and wheels also being blacked-out, it lacks any contrast and looks rather dull. A chrome plate on the exhaust canister adds some bling to an otherwise dark design.

The instrument cluster houses an analogue tachometer alongside a digital speedometer.

Like the Pulsar, the design of the Unicorn is now one that we are very familiar with, since it looks almost exactly the same as it did in 2007. The chrome inserts above the headlight and on the side panels look smart, and the tank has neatly styled thigh recesses. The Unicorn gets a monoshock – something that the other two bikes here miss out on – giving the rear of the bike a more uncluttered look.

The Unicorn loses out in some areas. It has to make do with fully analogue instrumentation and gets tube-type tyres, while the other two motorcycles here feature tubeless tyres.

The Achiever has the most meaty design here, with large body panels on the flanks and the tail. In the red paint scheme, the body panels contrast well with the blacked-out engine, exhaust system and wheels. The large chrome heat shield on the exhaust canister and the body-coloured rear-view mirrors add some flair to the design. Even on the darker paint schemes, the red coil springs on the twin shock-absorbers stand out nicely.

Unique to the Achiever is Hero’s i3s technology, a start-stop system designed to improve fuel-efficiency.

The Bajaj engine features the manufacturer’s trademark twin-spark technology. Meanwhile, the Hero motor features the aforementioned start-stop system. This can be turned off using a switch on the RHS switch-pod. All three engines are fed by carburettors and can be kick-started.

Five-speed gearboxes are standard, across the board, with each of the bikes using a one-down, four-up shift pattern.

While the Pulsar rolls on 17-inch wheels, both the Achiever and the Unicorn use 18-inch units; and all wheels are of the cast alloy type. As mentioned earlier, the Pulsar and Achiever get tubeless tyres while the Unicorn has to make do with tube-type tyres.

Each of the three bikes uses a telescopic fork, and the Unicorn is the only one here to feature a monoshock.

Brakes are also identical, with each bike getting a 240mm disc up front and a 130mm drum at the rear (though the disc brake is an option on the Achiever).

The Unicorn is a well-proven and extremely successful platform in India. So successful, in fact, that even Honda couldn’t kill-off the beloved 150 Unicorn. The bike maker had to bring it back in BS-IV-spec, despite the launch of the 160cc Unicorn, which was supposed to replace the 150. At Rs 73,029 (ex-showroom, Mumbai), the Unicorn is the most expensive motorcycle here – and though it doesn’t have any features that place it above its competition on paper, both Honda as well as the Unicorn brand have the power and following to command that premium.

The Achiever was Hero’s response to Honda’s dominance in this segment – and it is a reasonably well-equipped and well-priced motorcycle. In its disc brake variant, it is priced at Rs 68,100 (ex-showroom, Mumbai), placing it between the Honda and the Bajaj. The start-stop system will aid fuel-efficiency, and this makes the Achiever a great buy for anyone looking for a daily commuter.

With the demise of the Discover 150, the V15 was Bajaj’s only 150cc offering in this price bracket – considering the standard Pulsar 150 is considerably more expensive than the Unicorn and the Achiever. That has now been rectified with the introduction of the Pulsar 150 Classic. In this segment, the Pulsar offers the highest engine output, as well as the largest fuel tank capacity. It tops it off by being the cheapest motorcycle here, as well. It remains to be seen, however, whether that will be enough to capture some of the Unicorn’s mammoth market share.