The Apache’s long reign as king of the entry-level performance segment is under threat from the latest Pulsar. We find out if it’s finally time for abdication.

About a decade ago, Japanese manufacturers Yamaha and Suzuki captured the imagination of 150-160cc buyers with a pair of bikes that brought some much-appreciated sportiness, premium feel and flair to the segment – the FZ and the Gixxer. Fast forward to today, and it’s the Indian manufacturers that now dominate this space – TVS rules the segment with its tremendously capable RTR 160 4V, with the bike having undergone a couple of valuable updates over the past four years, including the introduction of more features, extra power and a different headlight. Now, it has received its most formidable competitor yet, in the form of the new Bajaj Pulsar N160. The Pune-based manufacturer has had a great deal of time to carefully study its competition and launch a targeted assault. So has it succeeded at stealing the throne?

THE HEART OF THE MATTER

If the Pulsar is to succeed, it will need to be more than the sum of its parts. After all, it’s 8kg heavier while sporting a more basic two-valve cylinder-head and nursing a 1.6hp deficit. But it nearly matches the Apache on torque, and makes its peak figures a little earlier in the rev range, which is why when you first ride both bikes back-to-back in the city, the engines seem evenly matched. The RTR’s motor does feel a little meatier, and its Glide Through Technology reinforces this feeling, but there’s a lot to like about the Pulsar’s engine. It’s very flexible and pulls cleanly right from 1,500rpm, feels meaty in the bottom and mid-ranges of the tacho, and throttle response is especially pleasing. Refinement levels in the city are excellent (even better than the already impressive RTR), the exhaust note is positively delicious (again, even more so than the already sweet-sounding  Apache) and gearshifts are superbly slick too. But as satisfying as this powertrain is to operate, when it comes to the primary objective of hauling you around, the TVS does a better job, and its advantage becomes even more stark when the road opens up.

Out on the highway, the Apache’s natural cruising speed is notably higher, and it can hold 100kph with considerably more ease and comfort than the Pulsar, which is a big factor to considerin this segment where customers also look for some sportiness. While the Bajaj begins to trail off at the top-end and struggle beyond 90kph, the RTR manages to carry its momentum almost all the way to the redline. This shows in our performance tests where the Apache was nearly 5 seconds quicker to 100kph than the Pulsar! These tests also highlighted how it’s the top-end where the RTR’s advantage really comes to the fore – at 60kph, the Pulsar is only around half a second behind, and even at 80kph, the gap is still less than a second. But from 80kph to 100kph, the TVS really pulls away and leaves the Pulsar to eat its dust. Crucially, despite its performance advantage, the RTR doesn’t sacrifice fuel economy – both bikes are neck-and-neck in the city, and the Apache’s more effortless cruising ability means it’s slightly more efficient on the highway.

This particular Apache did feel a little buzzy in the latter half of the tachometer, but it came to us spanking new, and our rigorous testing routine and tight schedule meant that it had to be put through the mill right from the word go. We know from past experience that this is one of the smoothest motors in the segment, and refinement levels are in the Pulsar’s ballpark when run-in properly.

Pulsar seats you more aggressively than the Apache.

In contrast to their performance levels, it’s the Bajaj that seats you in a more sporty riding position. The clubman-style handlebar is quite low and tapered-in, and the foot pegs are a little rear-set too. Overall, it feels quite engaging, without ever coming across as uncomfortable or harsh. The RTR has your upper body more upright, with a taller, wider handlebar. But the issue here is the foot pegs, which are placed quite high-up. Which is why even though they’re not as rear-set as the Pulsar’s, your legs are less comfortable here, and for someone like Rishaad (6’1”), it’s an outright deal-breaker. For my 5’8” build, the seating is comfortable for a while, but even my legs do begin to feel cramped after a couple of hours of being on the bike, and immediately jumping onto the Pulsar afterwards highlights just how much more comfortable its overall seating is.

The Bajaj seats you more comfortably, but in terms of ride quality, it’s the Apache that has the upper hand here. Overall, the TVS feels like it has a softer set-up, and this makes it very effective at absorbing bumps and tackling potholes at city speeds. Despite this, it doesn’t lose any composure when the speeds climb, and it remains quite sure-footed on the highway too. It’s only when you come across large road imperfections at high speeds that you begin to feel the limits of its suspension travel. The Pulsar’s set-up is definitely firmer, but not to the point of being uncomfortable. At high speeds, it’s the slightly more stable and composed bike here, but here in Mumbai, you do tend to bounce around more than the TVS on our miserable roads.

Show them a few corners and both bikes remind you of the fact that these are sporty machines, and not utilitarian 150cc commuters. The Apache’s wider handlebar means it feels the lighter steering and quicker turning motorcycle here, but the Pulsar isn’t far behind. Both bikes inspire confidence when leaned over, and tyres are more than adequately grippy for the performance levels on offer, but it’s the Pulsar that has the chunkier rubber here. The Bajaj also has a significant upper hand in the braking department – its 300mm front disc is a good deal larger than the 270mm unit on the RTR, and its braking feel is considerably better too, which explains why it stopped almost 1.5m sooner from 60kph in our braking tests. What also helps it stop sooner is the fact that it gets dual-channel ABS on its higher variant – the only bike in this segment to offer this feature.

In the city, too, both bikes feel very light and manageable, and slicing through traffic is a breeze no matter which one you’re aboard. The light clutch effort on both bikes helps here. But there are a number of features that the RTR offers and the Pulsar omits. The Apache’s fully digital instrument cluster is a great deal more advanced than the very attractive, but fairly basic semi-digital clocks on the Bajaj. TVS offers Bluetooth connectivity and three riding modes, as well as adjustable levers, none of which you get on the Pulsar. The two counts here where the Pulsar has the upper hand are its LED headlight, which outperforms the Apache’s unit (which is also an LED unit and not at all a poor headlight in isolation), and ABS, where it offers a dual-channel option and the TVS doesn’t.

The Bajaj Pulsar N160 is a very likeable motorcycle, and we were thoroughly impressed by it when we rode it in isolation in and around Pune recently. But going up against the segment king was never going to be easy; many have tried and failed before it.There are a lot of non-quantifiable areas where the Pulsar really excels, including the feel and satisfaction of things like the ultra-smooth fuelling and the pleasing soundtrack. But in this segment, where an entry-level buyer is beginning to demand performance, any extra capability that your engine can bring to the table is going to be a big positive, especially when there is no significant sacrifice in efficiency. And in this regard, there is still no motorcycle today that can match the way the Apache’s engine feels and performs, especially at higher speeds. The fact that it offers a great deal more features while still being almost exactly on-par in terms of price (variant for variant, the two are Rs 28 apart), means that there are simply too many areas in the RTR’s favour, and it’s only if you’re a very tall rider that you’ll find any serious fault with this bike.

Sooner or later, there will come a motorcycle capable of claiming its throne, and to equip itself for that day, TVS will need to work on making its RTR better suited to taller riders, and a little better in the braking department. But until then, it continues its reign as king of this segment. 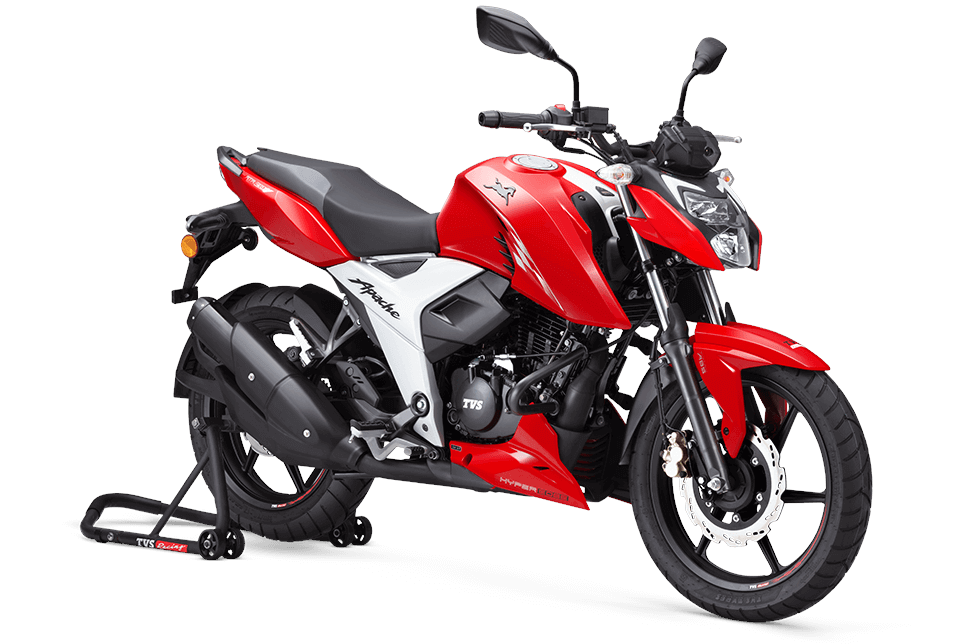