Smashing the BIC lap record in a Porsche 911 GT3

A Porsche 911 GT3, ex-Formula 1 racer Narain Karthikeyan and the Buddh International Circuit. This can mean only one thing – we’re after the production car lap record. We bear witness. 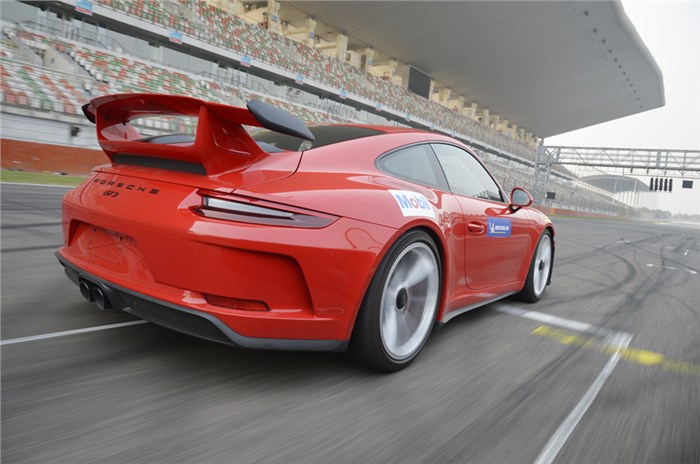 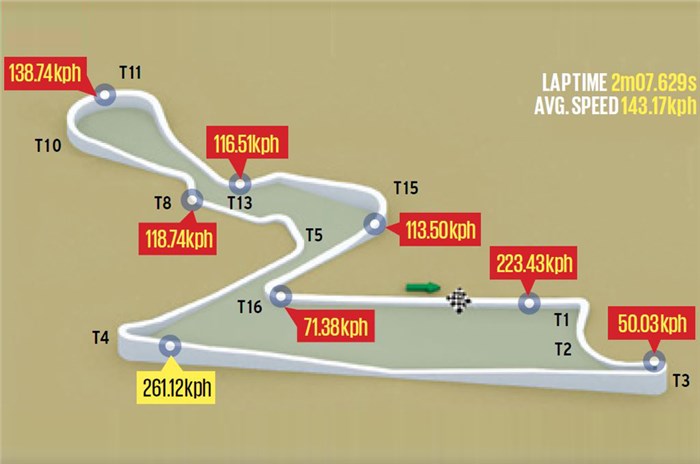 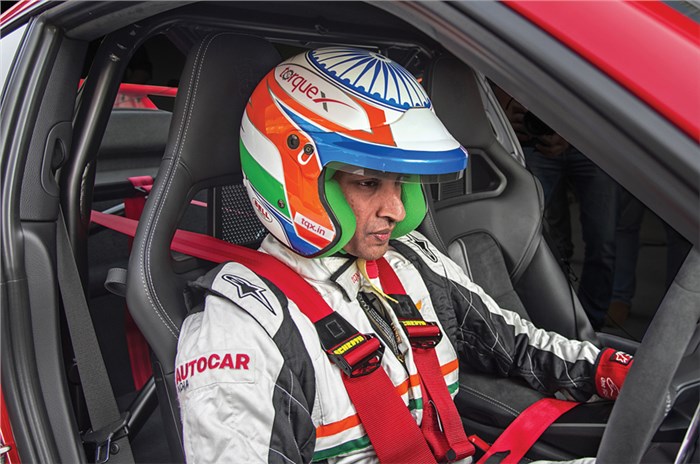 Narain in his GT3. Yes, the car belongs to him!

It’s unmistakable – the delicious  rasp of the naturally aspirated Porsche flat-six being wound to 9,000rpm. And what makes the ‘OOONNNNNN’ exhaust note sound even better is that, today, it’s bouncing off the empty grandstands and reverberating in my ears.

As we approach the pits, the sound gets even louder. And then, as the car flashes past turn 16 – the last one on the circuit – we hear the howl of tortured rubber, too. This is merely the evening before the big day, and officially only a shakedown, but Narain Karthikeyan clearly has his foot planted hard on the gas. And he isn’t letting up in the corners either. Shakedown? Nah, he’s going for it. He may be back at the Buddh International Circuit after a gap of six years and may need to reacquaint himself with the now largely dormant Grand Prix circuit, but let’s not forget, he competed in two Formula 1 races here. In 2011, he even qualified just behind then-teammate (and now multiple race winner) Daniel Ricciardo of Red Bull fame. And he even finished a fair bit ahead of him in the race. But why are we here with a production car?

The story starts in 2017, when Mercedes-Benz announced the arrival of the AMG GT R on Indian soil in dramatic fashion –the 585hp supercar set a new production car lap record around the Buddh. The time: 2m09.853s. What helped achieve this was that the man behind the wheel of the GT R was no ordinary test driver – it was Germany’s Christian Hohenadel, the 2010 FIA GT3 European Champion. He finished third in the 2011 GT1 World Championship and even has a second place finish at the 24 hours of Nürburgring. Talk about being qualified for the job. 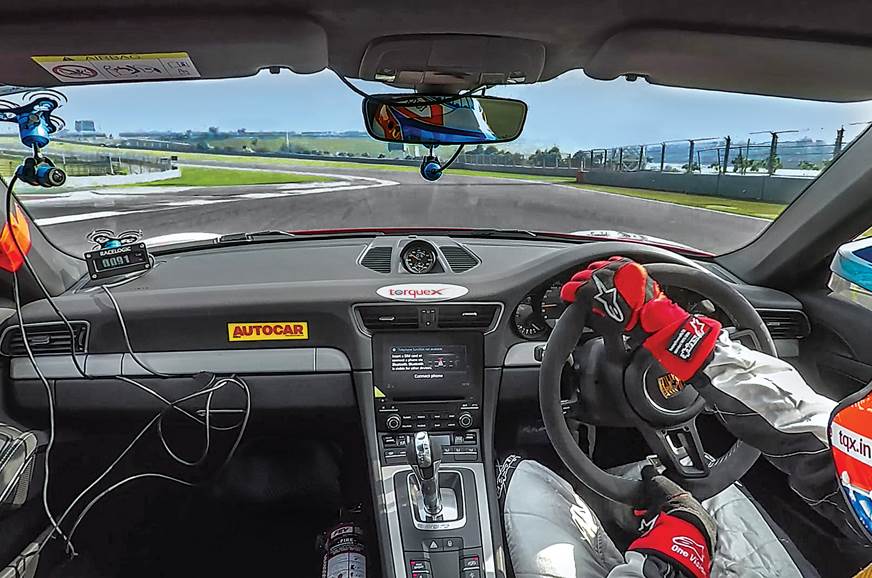 So Narain is aware that breaking the record won’t be easy. The AMG GT R is a quick car, as we saw recently at the Autocar Track Day 2018 (it broke the 2016 911 GT3 RS’ lap record), and beating its lap time will be difficult, because as we have seen around the world, these two cars are quite evenly matched.

“I’m betting on my greater knowledge of this quite technical circuit. Places like sector 3, where you can take many lines through the long parabolica (turn 10-11) before you actually find the quickest way. And what should also help is that I know many of the ‘blind’ corners, some of which are really difficult to commit to,” Narain had said earlier. 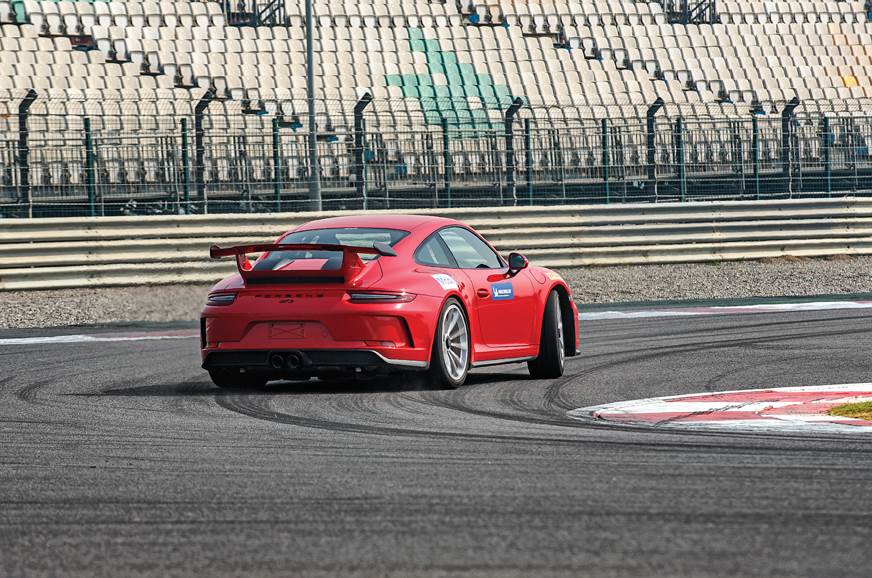 Tail kicks out as Narain gets on the power in the rear-engined 911.

Back in the pit lane, Narain steps out of the GT3, as the flat-six cools down in the background. India’s first Formula 1 driver has a smile on his face. And why not? The timing equipment shows he’s on the pace. And he knows he can step it up and go faster still tomorrow.

As the sun rises over the pit lane the next morning, the shift in mood over the previous day is perceptible. Gone is Narain’s playful grin, replaced by a steely stare and quiet determination. Small talk is kept to a minimum. The garage is busy with activity, and every single detail on the car is being looked at – from tyre pressures to vehicle setup. FMSCI official on hand to check if the car is stock.

A record run depends on a confluence of several factors – the weather, track temperatures and even the timing of the run are crucial. With even one of those not in your favour, even the most spirited of record attempts can be in vain.

There’s a fresh set of track-oriented Michelin Pilot Sport Cup 2 tyres waiting in the garage (incidentally, the same as used by the AMG GT R) but Narain’s decides to stick with the set this car came with from the factory. 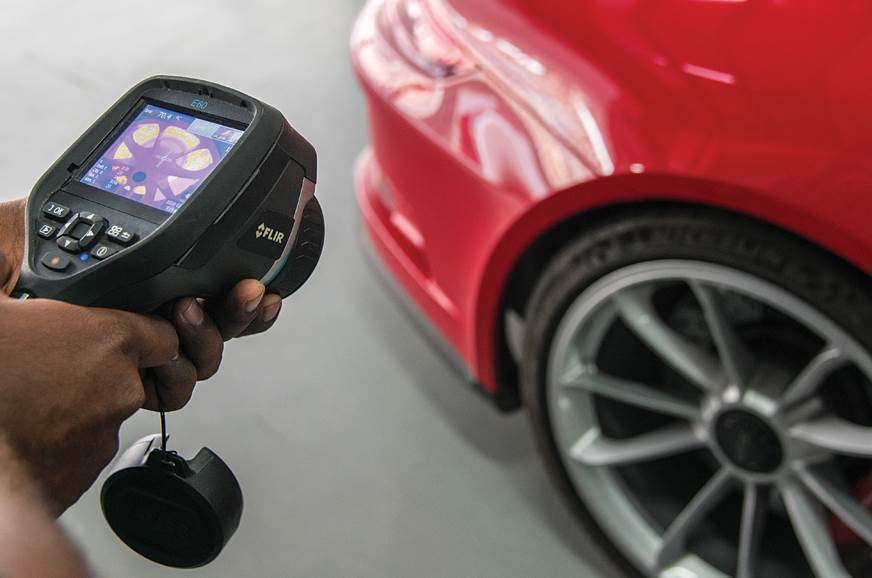 With mandatory checks by FMSCI (the local motorsport governing body) to make sure the car is stock complete, Narain climbs into the car, stepping over the roll cage, and straps on the six-point harness. Yes, this GT3 – specced with the Clubsport package, which adds a roll cage and a proper racing harness – is a serious piece of kit.

At 9:31am, Narain tunes everything out and fires up the engine. On his out lap, he pushes hard to make sure he gets sufficient temperature into the tyres on this nippy morning. 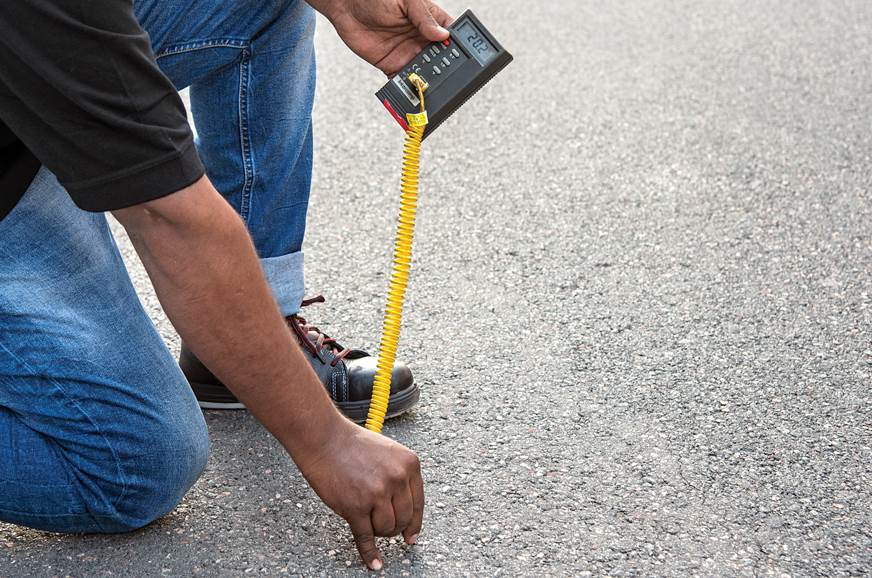 ...as is checking ground temperature.

What becomes immediately clear is that the record is within his grasp. His laps the previous day have given him some much-needed confidence, and even the warm-up lap is quick. What remains to be seen is just how easily he will break the record, on what lap and by how much.

As his out lap winds up, he gets to the end of the 5.4km-long track, makes a sharp ‘V’ instead of a ‘U’ to get the best exit and floors it. 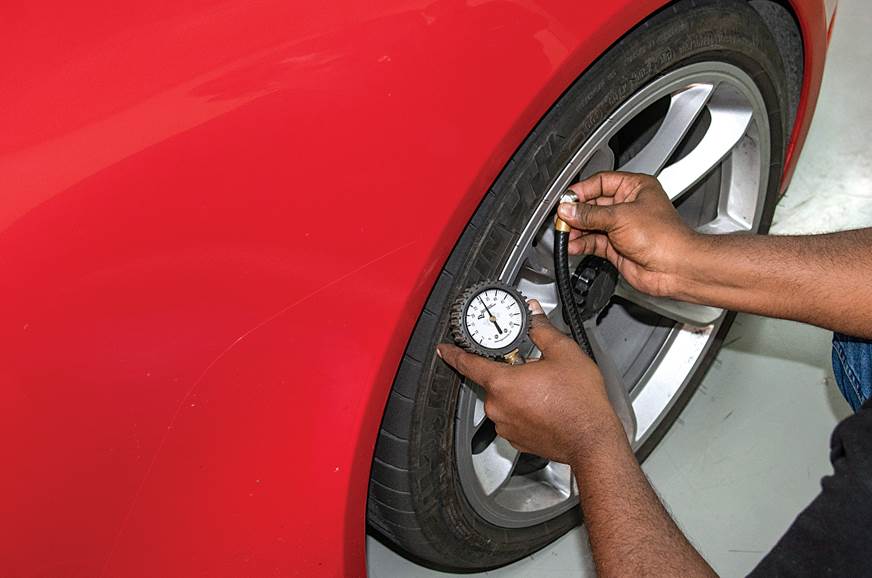 Tyre pressure bumped up for track use.

There’s more time to be found, according to Narain. So after doing a cool-down lap, he does another hot lap. The record has already been shattered, but he wants that gap widened. Whereas the earlier lap was neat and tidy, he now begins to carry more speed into corners, manhandle the nose of the car and then counter any potential off-line excursions with lightning-quick steering inputs – his right foot still planted.

The GT3’s tail comes loose through T3, and he chucks in an armful of opposite lock to keep it neat. He’s more aggressive through sector 3, and then, hey presto, lap 4 is an even quicker 2m08.268s. The best, however, is yet to come. 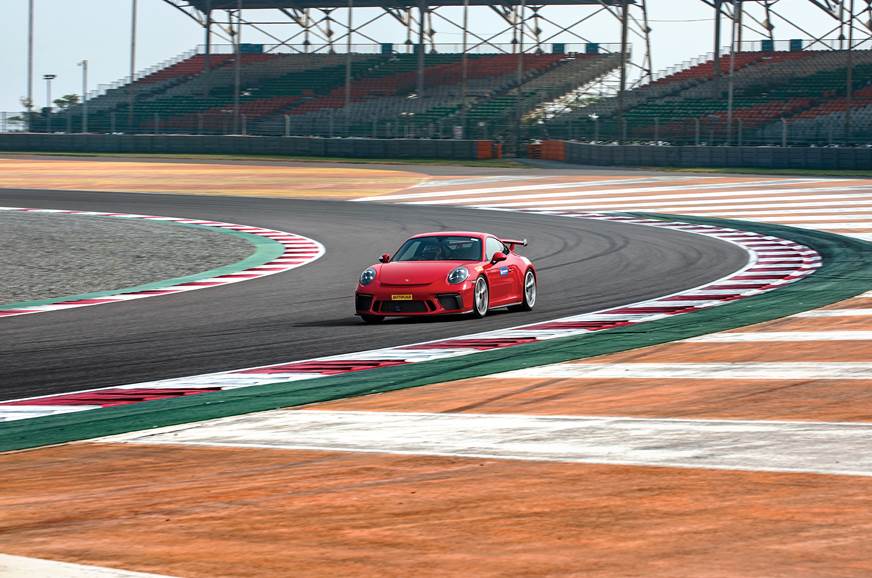 With the record now well and truly in his pocket, Narain throws caution to the wind. He squeezes every possible horsepower out of the GT3 on the long straight, and then brakes oh-so-late, having clocked 261.12kph on the back straight. And, elsewhere, he finds another few tenths too, with some even more aggressive driving and some even later braking. In fact, as Narain tells us later, the biggest improvements came from setting later and later braking points. “You get to the threshold of corners quite quickly,” he explained nonchalantly, “but nailing the braking points takes time.”

And then he knocks off even more time. He’s done it again: 2m07.629s. What imprints the moment in my memory is that flash of red, as the low-slung 911 crosses the line with the flat-six howling. When Narain pulls into the pits I wonder if he will switch to fresh tyres and head out again in search of more time. But the job is done and the big grin comes back on. What’s incredible is that in just five laps, he has smashed the lap record by a huge 2.2sec. 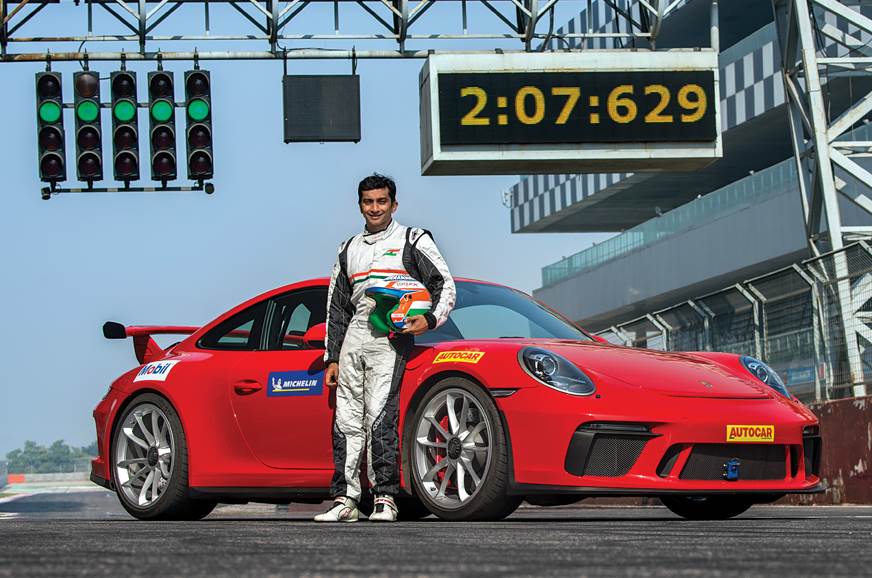 So what was the GT3 like at max attack? “The engine is in the back, so when you accelerate (and transfer weight to the rear), the nose inherently gets light. The GT3, however, has four-wheel steering and this smoothens things out. It gives the driver a lot of confidence, and the best bit is that even a layman can drive it very quickly and get up to almost 90 percent out of it,” says Narain.

This record won’t last forever and Narain knows it. “Records are meant to be broken, but watch out,” he says playfully, appearing to have something up his sleeve. He’ll be back for sure but maybe not with his own car the next time. Oh! Didn’t we tell you? This GT3, bought in February this year, is Narain’s own car. As present-day lingo would have it, this is #dailydrivergoals. 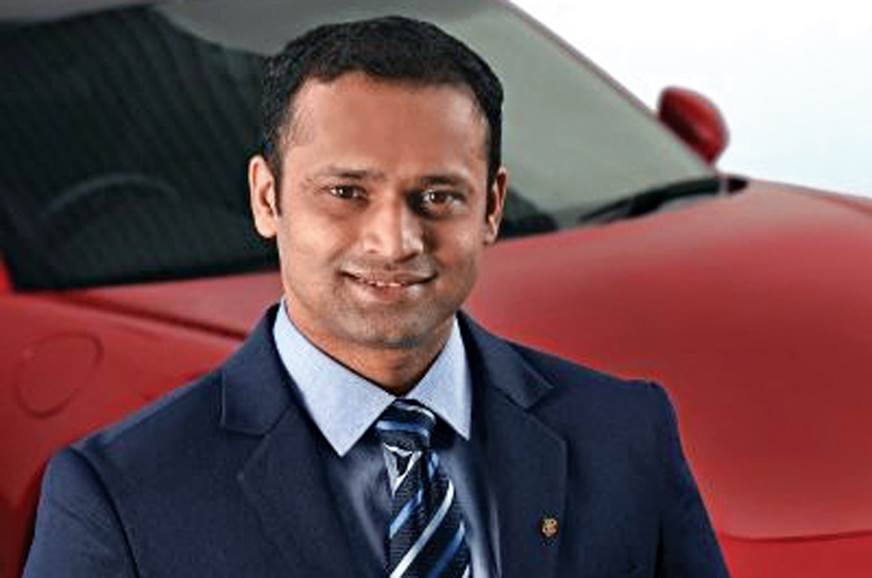 Your customer here has driven his own car to the track, he’s broken the production car lap record at this Formula 1 circuit and now he will drive home. Isn’t that amazing?
I think that’s just incredible. It’s clear Narain believes in Porsche, he believes in his GT3 and that makes me happy. But I must tell you, I also know of many customers who use a 911 on a daily basis. I know one customer who’s done 1,00,000km in his 911, a car he uses every day. Also, from the GT series, I believe the GT3 is the most practical car.

Do you see many 911 buyers in India take their cars to the racetrack?
A majority of our 911 customers live in close proximity to a racetrack. So yes, they do enjoy track days. But what is worth mentioning is that they also use it as a daily driver, which serves to highlight the 911’s versatility.