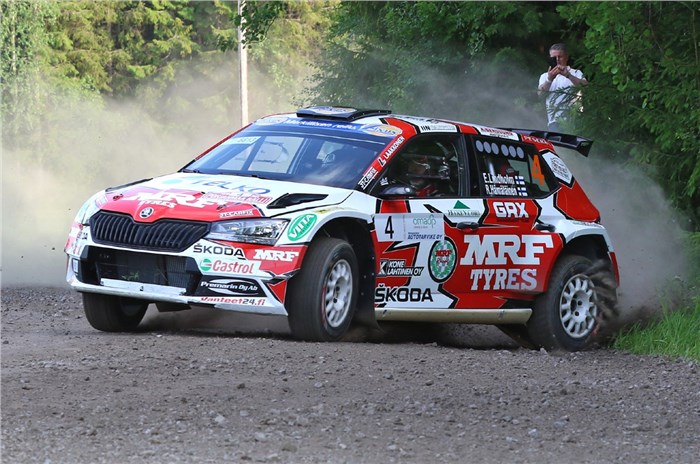 Team MRF Tyres secured its first win at the Finnish Rally Championship, with Emil Lindholm and Reeta Hämäläinen taking victory at the 2021 Pohjanmaa Ralli. This comes on the back of multiple podium finishes for the two in the championship.

Another stage win, this time in SS6, saw the two take the lead by 2.3 secs. Lindholm built on this in the next stage, setting the second fastest time in SS7 to further increase his lead. He once again set the fastest time in the final stage to seal overall victory.

MRF Racing has been entering a number of international rallies in Europe to test their tyres in competitive conditions. This is Lindholm’s second year with the team, and the tyre manufacturer says he has played “a vital role in the development of the tyres”.

So far, the team has picked up two podium results and a win in the Finnish Rally Championship, bringing MRF well into title contention. Speaking after the rally, Lindholm said, “It is amazing to win here in Pohjanmaa Ralli. This result shows the pace of development from the entire team at Team MRF Tyres and we should all be proud of our work,”

“Coming into the weekend, I was aiming for a good result but never dreamt of a victory. But the car and the tyres felt great all weekend. This rally is very fast, with some stages having an average speed of more than 120kph. Today, we took four stage wins and two-second places. It is a great result,” he added.

News ➡️ @MRF_Racing's Emil Lindholm and Reeta Hämäläinen win the Pohjanmaa Ralli - Round 4 of the Finnish Rally Championship - behind the wheel of a Skoda Fabia Rally2 Evo. pic.twitter.com/hTZvt4eXPC

MRF recently also scored a win at Rally Italia Sardegna, Round 2 of the Italian Rally Championship – Gravel. The team will be hoping to replicate this result next weekend at the San Marino Rally.