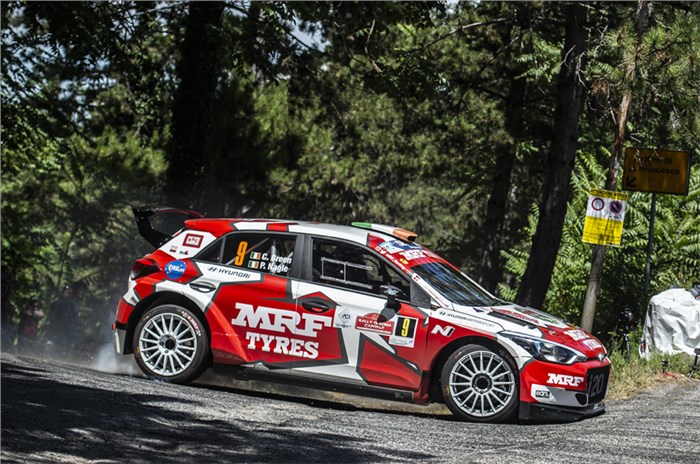 MRF Tyres enjoyed a successful maiden outing in the European Rally Championship (ERC), with both its drivers completing the 2020 season-opening Rally di Roma Capitale in the top 10. Irish racer Craig Breen, along with co-driver Paul Nagle, led the charge for the team, securing a 4th-place finish. Meanwhile, the Finnish duo of Emil Lindholm and Mikael Korhonen finished 10th overall.

After competing in select rounds of the World Rally Championship 2 (WRC2) in 2018, the Indian tyre manufacturer had taken 2019 off to work on developing its rally-spec tyres, and this is its first-ever full season competing in a rally championship in Europe.

Going into Rally di Roma Capitale, MRF was looking to gather valuable data since the venue served as the first test of its new tyres’ competitiveness on tarmac. Both Breen and Lindholm ended up being fairly competitive on the opening day, which comprised a total of six stages in rather hot conditions.

Driving a Hyundai i20 R5, Breen set the second fastest time in the first special stage (SS1). He lost a few seconds on the long SS3 after hitting an object on the road but survived the impact. His performance in the remaining stages slotted him into 6th place, overall, at the end of the first day.

Lindholm endured a tougher time after struggling for grip in the first three stages. But the team made some minor changes to the wheel alignment of his Skoda Fabia R5 evo2, and he was able to make his way up the order finish the day 10th overall.

The second day of the rally was split into three loops, covering a total distance of 100.8km. Breen and Nagle were locked in an intense battle for 4th place with Simone Tempestini and Sergiu Itu, with the pair swapping positions throughout the day.

Heading into the final stage, Breen had managed to build a gap of 4.5sec and controlled the pace to take 4th place by just 1.3sec to Tempestini.

“We gave it pretty much everything we had. We made gradual improvements over the weekend to learn how to get the best out of the tyre. To finish fourth is great and an absolute credit to the team,” said Breen.

“To think that this tyre barely existed a few weeks ago and to come out and be so competitive is a credit to the team. We gained a lot of valuable data on this rally.”

The team continued to refine the setup on Lindholm’s car throughout the day, and he ultimately classified 10th in the overall standings. “We were able to make improvements to the setup at each service point. It is a process of learning how to maximise the tyre and maximise my own performance. It has been over a year since I have done a tarmac rally, so I am pleased with my result,” the Finnish driver, who, unlike Breen, will only be competing in select rounds in the ERC1 category.

The warm weather and fast stages provided ideal conditions, with both drivers taking the opportunity to test different elements of the tyres in order to gain important data for future development.

The team will now head to Latvia for Rally Liepāja, which will be a gravel event, on August 14-16. You can head here for the complete 2020 ERC calendar.