The Indian rider suffered a hairline fracture right before the Dakar reached its half-way point. 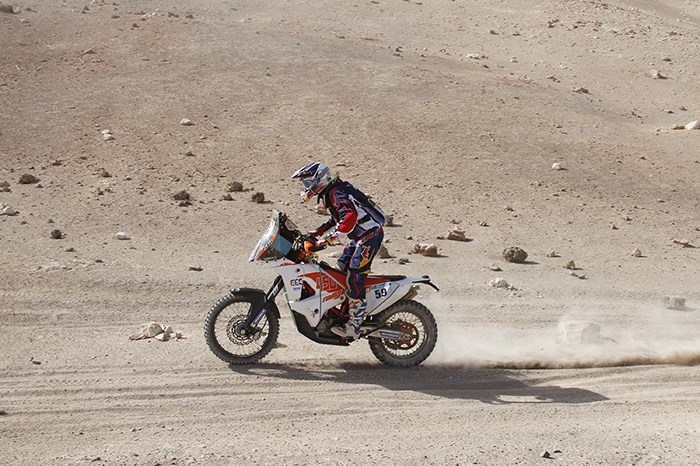 Indian rider CS Santosh continued to charge on through the toughest motorsport event on the planet as he maintained his position around the 50th place mark, ultimately being classified 52nd as Dakar resumed after its traditional rest day at the half-way mark of the rally.

The rest day ended up being aptly scheduled for the 31-year old Indian, who had a spill on the previous stage, suffering a hairline fracture on his big toe of the left foot. This came on the back of a nasty fall he had endured on Wednesday, which broke his helmet and left him with a severely bloody nose.

The incident happened when he attempted to overtake another biker on stage, and ended up being blinded by the dust and caught himself in fine powdery sand (known as fesh-fesh). He lost control and trapped his left foot underneath his KTM 450 Rally Replica, which gave him the fracture.

With 36 hours to recover from his injury instead of a normal four-week period, several injections were administered plus a bunch of painkillers was what he is relied on, to get back in action on Saturday’s stages.

As for Sherco – TVS, Alain Duclos continued to be Mr Consistency and finished the stage 12th, popping himself up back into the top-ten with a 9th place at the half-way mark.

His teammate Fabien Planet also gained a few places, knocking on the door of the top-20 after being classified 22nd overall.

In cars, an unwell Nasser Al-Attiyah's lead was trimmed by Giniel de Villiers on Saturday's marathon stage, from which Orlando Terranova emerged with the fastest time.

In a change to the format for 2015, competitors have to do without their service crews and assistance trucks for the middle weekend, carrying only three spare tyres with them for Saturday's 199-mile run from Iquique to Uyuni and Sunday's follow-up 317-mile route back to Iquique, where the rest day will take place on Monday.

The punishing seventh stage took place partly at 3,500 metres above sea level, and rally leader Al-Attiyah was only seventh fastest after having to stop several times due to altitude sickness.

His pursuer de Villiers' Imperial Toyota was only one place ahead of the WRC2 champion's X-raid Mini in the Saturday results, but was three minutes quicker - bringing Al-Attiyah's overall lead down to eight minutes.