Lewis Hamilton has landed yet another milestone, receiving a knighthood after what has been a record-breaking F1 season for the British racer. 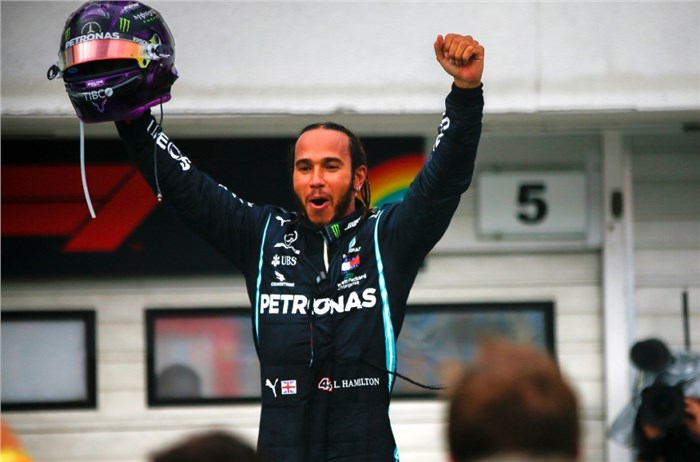 Lewis Hamilton has been awarded a knighthood in the UK 2021 New Year Honours list, following a landmark season that saw him equal Michael Schumacher’s record of seven F1 world championships. The award is one of the highest honours bestowed in the UK.

The Mercedes F1 driver, now with 95 race wins, also holds the claim of being the most successful driver in F1 history, in terms of outright wins; Schumacher had previously held the record with 91 wins.

Hamilton was made a Knight Bachelor for services to motorsport at the end of a dominant season. He had been made a Member of the British Empire (MBE) in 2008 following his first championship title. There had been reports that Hamilton has previously been overlooked for a knighthood due to his tax arrangements.

Notes released by the UK government on the awards said Hamilton was "rewarded for his outstanding achievements and contribution to motorsports", and said that his achievements in setting new F1 records for wins, pole positions and podiums "place him amongst the greatest ever sportsmen that the United Kingdom has produced."

The citation also noted Hamilton's charitable and philanthropic work both in the UK and overseas on a range of causes "from improving equality within motorsport, to supporting disadvantaged young people, children’s charities and conservation causes."

F1 drivers who were awarded knighthoods

Knighthoods are among the highest honours awarded, and are given for exceptional achievement in a given category. Hamilton is the fourth F1 driver to have been awarded this honour, joining Stirling Moss, Jackie Stewart and Jack Brabham. Frank Williams and Patrick Head have also been knighted for their efforts in growing Williams into one of the sport's most successful teams.

The knighthood, which carries the title Sir, is the latest recognition for Hamilton from beyond the world of motorsport. Earlier in December, he won the BBC Sports Personality of the Year award for a second time.

The British racer won the BBC award in a public vote ahead of Liverpool FC captain Jordan Henderson. He had previously won the award in 2014, and has also finished runner-up four times. Hamilton is now one of four people to have won the Sports Personality award twice, including fellow F1 champions Nigel Mansell and Damon Hill. Tennis star Andy Murray has a record three wins.

F1 legends Stirling Moss and Jackie Stewart have both also won the award, while John Surtees – the only driver to win world titles on two and four wheels – was honoured for his success in motorcycle racing.