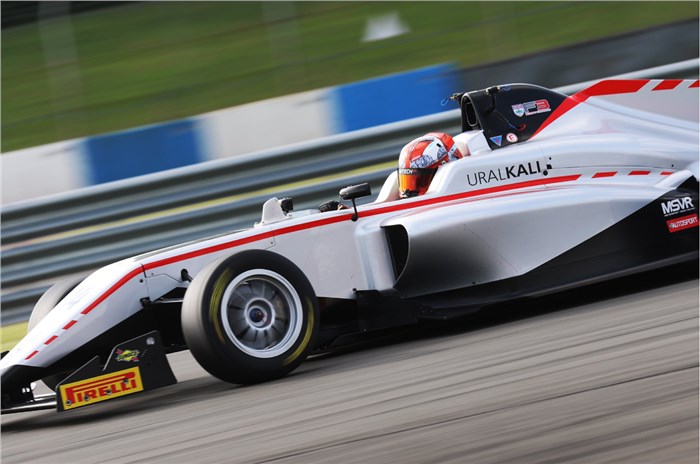 Kush Maini has further extended his lead in the 2020 British Formula 3 (F3) championship after clinching his second win of the year. The Indian racer took the championship lead after securing his first win of the season at the Brands Hatch circuit, earlier this month. He has followed that up with another strong performance at Donington Park, taking home two podium finishes, including victory in Race 3.

Racing for Hitech GP, Maini kicked off the Donington Park weekend with a strong 3rd place finish in Race 1. He couldn’t replicate the same performance in the reverse grid Race 2 and had to settle for 10th place.

But things fell into place for Maini in the final race. With the grid for Race 3 determined by each driver’s second fastest lap in qualifying, he slotted into 2nd place for the race start.

Polesitter Kaylen Frederick had a good launch, but Maini quickly started gaining ground. The pair went wheel-to-wheel through Turns 5 and 6, with Maini on the outside. He finally made a move stick on the inside of Turn 7 to take the race lead. From there on, the Indian was able to build a fairly healthy gap, aided by the fact that Frederick then had to battle Ulysse De Pauw for position.

After moving up to 2nd place, De Pauw was able to close the gap in the final few laps. But Maini was never under threat and went on to win the race by 2.771 secs. Nazim Azman rounded out the podium after Frederick but was handed a penalty for exceeding track limits.

"I knew I had to get him [Frederick] on the first lap because it's too hard to follow around here. I got a good start thankfully and put him under pressure into turn one, which messed up his run down to the Old Hairpin. I got a run on him, lunged him into the Old Hairpin, he kept around the outside and then wheel to wheel to McLeans. I braked really late and he had nowhere to go, so I got the move done and I'm really happy,” Maini said after the race.

By how many points does Maini lead the 2020 British F3 championship?

Following the latest rounds at Donington Park, Maini has now racked up nine podium finishes in 14 races. As a result, he has increased his British F3 championship lead to 54 points from Frederick, with 10 races still to go.

Echoing what he said at Brands Hatch, Maini once again emphasised that he’s just focusing on maintaining his current form rather than thinking about the overall championship. “There's still way too many races left [to think about the championship] so we're just going to keep up this form,” he said.

The 2020 British F3 championship will resume in two weeks’ time with four races at Snetterton in Norfolk on October 3-4.