Sebastian Vettel storms to his 35th F1 pole as team-mate Webber makes it a Red Bull 1-2 in Qualifying for the Indian GP. 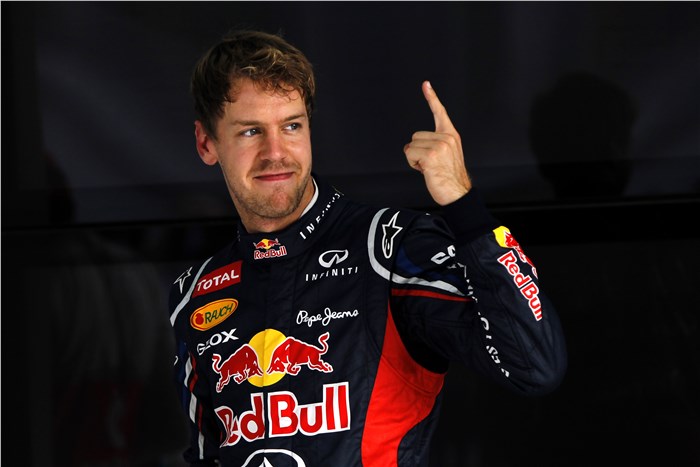 Sebastian Vettel translated his domination of Indian Grand Prix practice into another pole position as Red Bull again filled the front row in qualifying at Buddh.

An error at Turn 7 on his first Q3 run gave Vettel's rivals a tiny hint of potential vulnerability. But the world champion responded with a 1m25.283s at the second attempt to beat team-mate Mark Webber to the top spot. Webber's retaliation was then compromised by a mistake at Turn 3.

Vettel stayed out in case he had to defend his position, before abandoning the lap once it became clear he was out of reach.

His championship rival Fernando Alonso starts back in fifth. The McLarens of Lewis Hamilton and Jenson Button filled row two, pushing the Ferraris of Alonso and Felipe Massa down to row three.

Despite fearing that Williams lacked qualifying pace this weekend, Pastor Maldonado still made it into Q3 again and took ninth. Nico Rosberg also reached the pole shoot-out but did not set a time.

Several teams saw one of their drivers reach the top 10 while the other ended up in the midfield.

The second Lotus of Romain Grosjean was pushed outside the Q3 cut late on, leaving him 11th. Bruno Senna's promising start to Q2 did not translate into a top-10 appearance and his Williams fell to 13th, and Michael Schumacher was 0.6s off Mercedes team-mate Rosberg as he qualified 14th.

There were big intra-teams gaps for Force India and Sauber too, with 0.7s splitting Nico Hulkenberg in 12th and Paul di Resta in 16th, and Kamui Kobayashi a long way off emulating Perez's Q3 form in 17th.

Jean-Eric Vergne was again eliminated in Q1. Heikki Kovalainen spun into the gravel at the end of the opening segment, leaving his Caterham team-mate Vitaly Petrov free to lead the tail-end pack.