Fernando Alonso finished second for Ferrari, with Hamilton getting on the podium after starting from the pitlane. 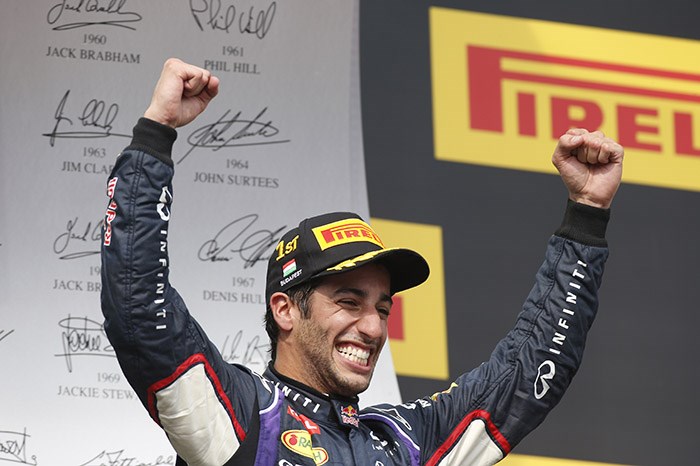 Daniel Ricciardo made two late overtaking moves on Lewis Hamilton and Fernando Alonso to claim the second victory of his Formula 1 career in a dramatic Hungarian Grand Prix.

Alonso looked set to end a 15-month victory drought for Ferrari, but ultimately found a mammoth 32-lap final stint on a set of soft Pirelli tyres too much and thus had to settle for second.

Hamilton reduced the points gap to title rival Nico Rosberg by taking an unlikely podium finish after a pitlane start, just fending off his Mercedes team-mate over the final lap as he battled to the finish on a well-worn set of medium tyres.

Hamilton survived a brush with the barrier after spinning at Turn 2 on the first lap, and also courted intra-team controversy by holding up team-mate Rosberg during his final stint despite radio requests to let him through.

Rosberg dropped to seventh after his third and final stop with 14 laps to go, but charged back to fourth to minimise the damage inflicted by two-stopper Hamilton to his championship lead to just three points.

Poleman Rosberg had dominated the wet early stages, leading Valtteri Bottas, Sebastian Vettel and the fast-starting Ferrari of Alonso, but this quartet had to wait an extra lap before pitting for dry tyres when Marcus Ericsson crashed heavily exiting Turn 3 on lap nine, bringing out the safety car.

This dropped them into the pack behind Ricciardo's Red Bull and the McLarens of Jenson Button and Kevin Magnussen, and not far ahead of Hamilton, who had made rapid progress through the midfield.

McLaren gambled on more rain, so fitted Button with new intermediate tyres and left Magnussen out on his original set. This gambled failed and the McLarens were forced to pit for dry tyres in racing conditions.

A huge crash for Sergio Perez (who had earlier collided with Force India team-mate Nico Hulkenberg) exiting the final corner on lap 23 brought the safety car back out, and Ricciardo and the Williamses of Bottas and Felipe Massa dived for the pits.

This left Alonso in the lead, but the Spaniard's gamble on a two-stop strategy failed as Ricciardo charged back to the head of the field over the final few laps.

Massa ran as high as second, but switched to a three-stop strategy and made it home fifth, ahead of Kimi Raikkonen, who scored his best result since returning to Ferrari this season by rising from 16th on the grid to sixth.

Vettel ran in the top order early on, but spoiled his race with a frightening 360-degree spin after catching the wet kerb exiting the final corner on lap 32.

The reigning world champion ultimately brought his Red Bull home seventh, ahead of Bottas (who lost out badly in the pits) and the Toro Rosso of Jean-Eric Vergne (who also ran at the front early on).