Hero MotoSports on the podium at 2021 Silk Way Rally 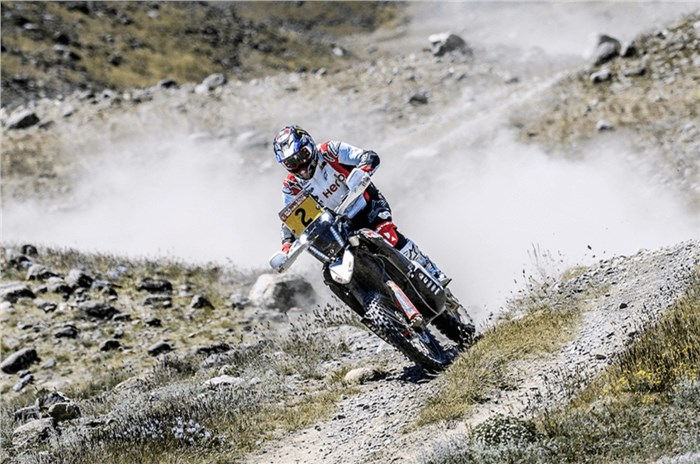 The Silk Way Rally is regarded by many as one of the most important pre-Dakar tests. The event usually sees participants battle it out across Russia and Mongolia. But this year’s event was cut in half - covering around 3,100km – as the Mongolian leg was cancelled due to borders being closed.

Caimi registered a stage win right off the bat. The next few stages saw him hold on to 2nd place overall, but he lost some time in the marathon stage after getting stuck in a river a couple of times. This dropped him to 3rd place – a position he held on to after the final stage.

He ended up missing out on 2nd place by just 6 seconds. “I don’t have the words to describe how happy I am feeling right now, not just for myself, but also for the team. They have done a fantastic job, and we were able to finish on the podium,” Caimi said.

"We pushed hard during the entire race and in the end, missed the second position by just six seconds. I am really happy with the result, and looking forward to growing with the team. I am sure we can accomplish great things together. I also want to take this opportunity to thank the Hero family and the fans for their support and good wishes,” he added.

In what was his first Silk Way Rally outing, Buhler put in a fairly consistent performance throughout the rally to bag 5th place.

Unfortunately Rodrigues, who picked up a stage win at the recent 2021 Rally Kazakhstan, endured a slew of problems. He was handed a penalty for a late start due to an electric issue before Stage 1 and later had to deal with a flooded engine as he got caught out while crossing a river.

The rally veteran had to take his Hero 450 Rally bike apart to drain the water and continue the stage. He approached the rest of the rally more cautiously to avoid any further damage and ended up finishing 9th overall. Speaking after the rally, Rodrigues said, “We will work hard for the coming races, and I am hoping for better luck next time.”