Toro Rosso graduate Verstappen became the youngest driver to win at the age of 18 years and 227 days, beating Vettel's record by more than two years. 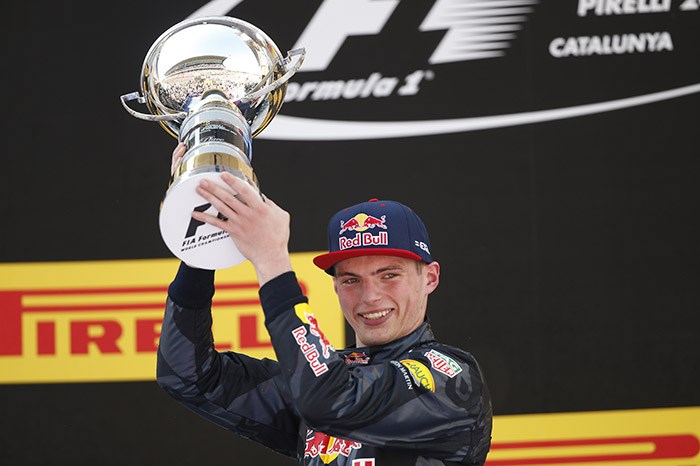 Max Verstappen made Formula 1 history with Spanish Grand Prix victory as the fight between Mercedes' Lewis Hamilton and Nico Rosberg imploded after 30 seconds of lap one.

On his debut drive for Red Bull after recently swapping seats with Daniil Kvyat, Toro Rosso graduate Verstappen became the youngest driver to win a race at the age of 18 years and 227 days, beating Sebastian Vettel's record by more than two years.

Verstappen led for the final 32 of the 66 laps at Barcelona's Catalunya circuit as he completed a two-stop strategy to perfection, finishing just 0.6 seconds ahead of Kimi Raikkonen in his Ferrari, with Vettel third, a further 4.9s down.

While such a triumph was unforgettable, the race will also live long in the memory given what unfolded between Hamilton and Rosberg.

From second on the grid Rosberg enjoyed a slightly better start than Hamilton on pole and passed his team-mate around the outside of the first corner.

Out of Turn 3 Hamilton managed to gain a superb launch, moving into Rosberg's slipstream and across to the right as he aimed for an overtake.

Rosberg aggressively covered off what was an ambitious move by Hamilton, who had managed to get his front wing aligned with the German's right-rear tyre.

Trying to avoid a collision Hamilton took to the grass, but immediately went into a slide and careered into Rosberg, sending both into the gravel at Turn 4.

Hamilton immediately covered his visor with both hands, and after a period of reflection sat in his car, later flung his steering wheel out in a fit of anger.

The incident immediately brought out the safety car, with Daniel Ricciardo leading new team-mate Verstappen, followed by Toro Rosso's Carlos Sainz Jr, who had started eighth, and the Ferraris of Vettel and Raikkonen.

They matched tactics at their first stops for mediums, before both teams then split strategies.

Leader Ricciardo returned to soft rubber after his second stop - immediately indicating a three-stop plan - and was covered off by third-placed Vettel a lap later.

Verstappen, who had closed to within seven tenths of Ricciardo, and Raikkonen remained out, not pitting until laps 34 and 35 respectively and taking on medium tyres to commit to a two-stop strategy with a long stint to the finish.

After just eight laps on the softs, Ferrari made a tactical move by bringing in Vettel again for his third stop, and moving back to the mediums.

Leader Ricciardo, following a poor few laps, took on his set of mediums after 43 laps, emerging some distance behind third-placed Vettel, with Verstappen holding on to a one-second cushion to Raikkonen at the front.

Despite constant pressure from Raikkonen, Verstappen stayed ahead to the flag for a remarkable win.

As the lead quartet bunched up, Ricciardo attempted a pass on Vettel for third into Turn 1 with seven laps left, only to slightly overcook it and allow the four-time champion back through.

Vettel was forced to take evasive action to avoid hitting Ricciardo, and again as the Australian rejoined the track, leading to an expletive-laden radio rant.

Ricciardo kept pushing, but on the penultimate lap his right-rear tyre gave way, forcing him into the pits for a late change, and with such a significant gap to fifth-placed Valtteri Bottas in his Williams, he still claimed fourth.

Behind Bottas came Sainz, followed by the Force India of Sergio Perez, Williams's Felipe Massa charging from 18th on the grid, Jenson Button for McLaren, with Kvyat 10th.

Nico Hulkenberg was forced to retire after 21 laps following a small fire and with smoke coming from the back of his Force India, with McLaren's Fernando Alonso following suit 25 laps later, bemoaning "no power".