Mercedes locked out the front row with Hamilton on pole, while Stroll and Perez completed a second row lockout for Racing Point. 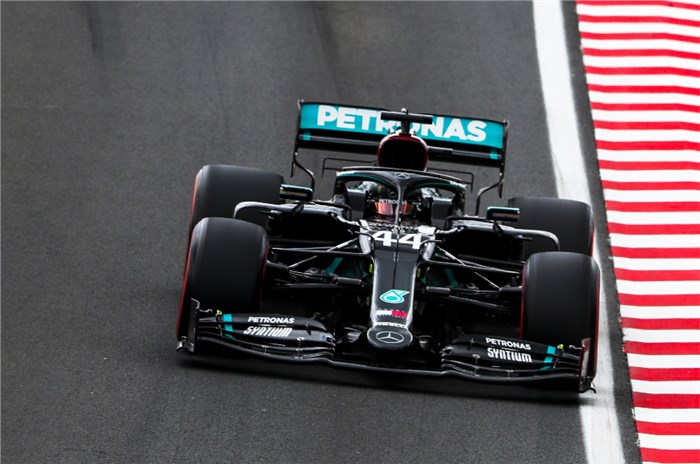 The Briton roared around the Hungaroring in a record time of 1min 13.447secs, 0.107 secs quicker than Bottas. He was a whopping 0.930 seconds faster than Lance Stroll and Mexican Sergio Perez, who completed a second row lockout for Racing Point, matching the team’s display in a wet qualifying for the 2018 Belgian Grand Prix.

Racing Point, whose car has been dubbed the ‘Pink Mercedes’ for its resemblance to the German marque’s 2019 championship-winning challenger and drawn an official protest from midfield rival Renault, were nevertheless in something of a league of their own. They outpaced the 5th-placed Ferrari of Sebastian Vettel by a handy 0.4 seconds.

Hamilton’s Hungarian pole was the 90th of his career and second in a row after the Briton also started last Sunday’s Styrian Grand Prix from the front. It was also his seventh at the Hungaroring track, with the 35-year-old chalking up four of those in the last five years.

“I have to pinch myself, it doesn't register,” said Hamilton, now 22 pole positions clear of Michael Schumacher’s previous record career haul of 68.

“It's quite humbling because I work with an incredible bunch of people. Valtteri doesn't make it easy for me and it takes perfection to do laps like that,” added the six-time champion, who will equal Schumacher’s record for most wins at a single Grand Prix if he takes his eighth triumph in Hungary on Sunday.

Bottas, who won the season-opening Austrian GP from pole, matched Hamilton to the tenth as the pair began their final flying laps. Ultimately, the Finn conceded that Hamilton was just a shade out of reach even if he isn’t giving up on extending his six-point advantage over the Briton at the top of the overall standings.

“What I need is to win races to maintain that,” said Bottas.

“So it’s going to be the only goal tomorrow and I’m sure the first lap will be interesting.”

Stroll and Perez will be locked into a start line battle of their own. Both will be keen to get a big result with Vettel, leaving Ferrari at the end of the year, in talks to join the Silverstone-based squad in 2021.

“The car was strong all the way through qualifying, the whole weekend, really. It's just about piecing all together. Sights set on tomorrow going to try and grab a few big points.”

Charles Leclerc was 6th for Ferrari behind Vettel, as the struggling Italian team, who have lacked straight-line speed, fared better around the tight twists of the Hungaroring than they had at the power-hungry Red Bull Ring in Austria. Instead it was rival Red Bull’s turn to struggle.

The Milton Keynes-based team, who finished a distant third in Austria with Max Verstappen last weekend, were expected to pose a far stiffer challenge to Mercedes in Hungary, a track which has traditionally played to their car’s strengths.

But both Verstappen and team mate Alexander Albon looked ill at ease. The Dutchman was only 7th, 1.4 secs off Hamilton’s benchmark. His Thai team mate, meanwhile, didn’t even make it through to the final top-ten shoot out and will start 13th.

Lando Norris and Carlos Sainz were 8th and 9th for McLaren. Pierre Gasly overcame a malfunctioning Honda engine to round out the top 10 for Alpha Tauri.

The Williams team’s upward trajectory continued with George Russell making it out of the first phase of qualifying for the second weekend in a row to go 12th fastest. This time he was joined by Canadian rookie Nicholas Latifi who was 15th.