EuroNASCAR 2: Advait Deodhar on the podium in Czech Republic

The Indian racer had a mixed weekend, with a 2nd place finish in Race 1 but a crash in Race 2. 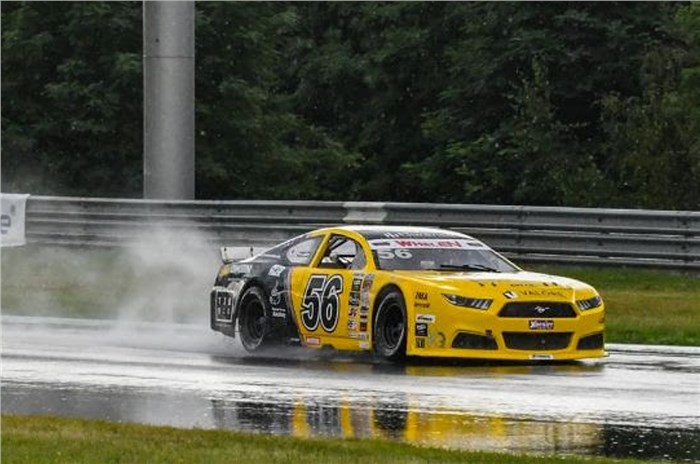 Advait Deodhar secured a EuroNASCAR 2 podium finish at Round 5 of the NASCAR Whelen Euro Series in the Czech Republic. Just recently he’d become the first Indian driver to win a race in the championship, clinching his maiden victory at the UK’s Brands Hatch Circuit.

Qualifying started off on a wet track. But with a dry line soon appearing, it ended up being a shootout, with the last cars to cross the line recording the best times. Deodhar managed to qualify for the first race in 5th place.

He gained three places on the opening lap itself and settled into 2nd place. Deodhar was under pressure from Martin Doubek, but he was able to defend his position well and held on to 2nd place. The race was won by Tobias Dauenhauer.

“After starting 5th, I had no intention of hanging around and immediately threw one down the inside in to the first corner, went very late on the brakes and gained two positions. Halfway through the lap, I saw another opportunity and passed the car in 2nd place around the outside of Turn 15, on a wet track,” explained Deodhar.

“I then managed to match the leader and maintained a gap till the end of the race. The rain stopped and the track began to dry. The wet tyres started to heat up very quickly and tyre management was key. The car in 3rd was hot on my heels through the race and he finished less than a second behind me. Great points in the bag with another podium,” he added.

Unfortunately, Deodhar couldn’t continue his points scoring streak in the next race. Starting from 3rd on the grid, he was involved in an early crash with Pierluigi Veronesi that took out both drivers.

Deodhar currently stands 4th overall in the championship, but he believes he has the pace to score more wins. “I have no doubt I had a winning car in this race [Race 2], so this retirement really hurts. It also gave my rival, the championship leader [Dauenhauer] full points this weekend,” he said.

“Overall, still a good weekend and more proof that CAAL Racing have given me a strong package and we can fight for this championship.”

Next up on the EuroNASCAR calendar are two races at the Automotodrom Grobnik in Croatia, on September 18-19.