The Indian racer enjoyed a strong weekend at Brands Hatch, picking up his maiden victory and a podium finish. 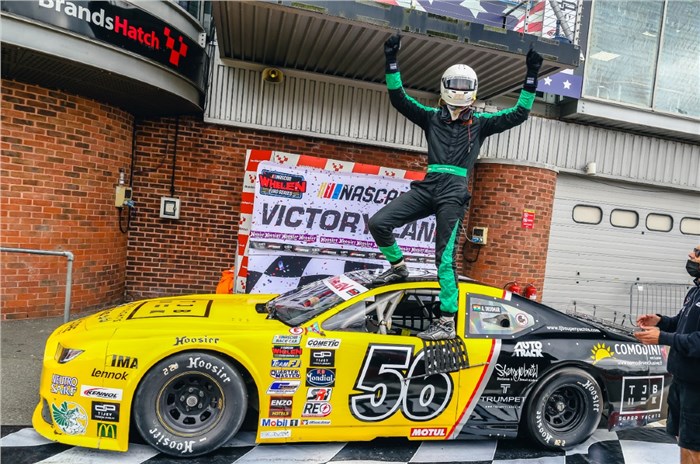 Advait Deodhar secured his maiden EuroNASCAR2 victory after leading every single lap at Round 3 at UK’s Brands Hatch circuit. He’s the first Indian racer to achieve this feat in the NASCAR Whelen Euro Series.

Deodhar had to skip the 2020 EuroNASCAR 2 season due to the pandemic, but he’s back this year, racing a Chevrolet SS for CAAL Racing.

After a lacklustre opening two rounds, he returned with renewed zeal for the next two rounds at Brands Hatch. And that showed, as he grabbed pole position for the first race, taking full advantage of the rain during qualifying.

He went on to lead every single lap of the 30-lap race to pick up his first-ever win in EuroNASCAR 2. The Indian had to defend from a charging Tobias Dauenhauer, and managed to cross the finish line just 0.433sec ahead.

“I will never forget this moment in my life”, said an ecstatic Deodhar. “I need to pinch myself because I cannot believe I have won. It was a tough race, with Tobias at my back bumper during all laps of this round. Thanks to CAAL Racing for giving me an awesome car. It was only the second win of my life and it’s something very special to score one here at Brands Hatch.”

Deodhar 3rd in EuroNASCAR Round 4

Deodhar also set the fastest lap in Round 3 to slot into pole position for the next race a day later. While he wasn’t quite able to repeat his Round 3 performance, he was able to record a strong podium finish in 3rd place.

Originally from Mumbai, Deodhar made his EuroNASCAR 2 debut in 2018, racing in the junior class. That same year, he went on to become the first Indian to win a title in the championship by coming out on top in the Club Challenge.

Financial backing proved to be an issue in 2019 and he had to part ways with his team DF1 Racing. But he was soon signed by his current team CAAL Racing and went on to finish the season in 4th place.

Unfortunately, the COVID-19 pandemic meant that he couldn’t compete in the 2020 season, but he’s back this year and believes he is “fully prepared” to fight for the championship this time around. He currently stands fourth overall with 124 points, just five points behind Tziortzis Vladimiros.