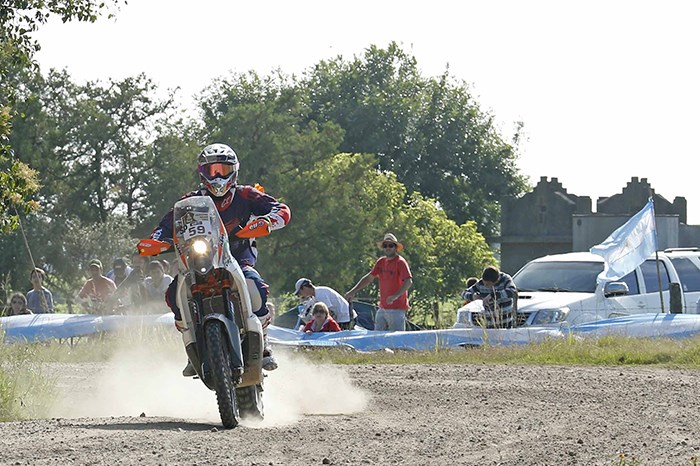 British rider Sam Sunderland leads the Dakar at the end of the 175 km long opening special stage, beating Paulo Gonçalves (Honda) by a slim margin. Nasser Al-Attiyah romped around on a fast and somewhat tricky course to beat homeboy Orlando Terranova by 22 seconds in the car category.

Despite a streak of bad luck during his first two Dakar starts with Honda, Sam Sunderland showed promise during Sunday’s opening stage from Buenos Aires to Villa Carlos Paz, in which he took his second stage win in the biggest rally on the planet.

Reunited with his KTM after its transatlantic crossing, the Englishman masterfully used his motorcycle's qualities to steal the thunder from teammate Marc Coma, who finished the stage over a minute back. He now has good reason to reassess his goals, although the 25-year-old knows that the race is long and the competition will be fierce. Paulo Gonçalves, for instance, wants to make amends in South America. The Portuguese 2013 rally world champion broke down in tears when his Honda burst into flames during the fifth stage of the 2014 Dakar.

For the Indian contingent, which comprises of the TVS sponsored Sherco Factory Team, and of course the first Indian rider to compete in the Dakar, CS Santosh, it was a productive day overall. Frenchman Alain Duclos ended up a strong fifth fastest on the first of the Sherco machines, while his teammate Fabien Planet lies 24thafter the opening stage.

Indian rider C S Santosh also enjoyed a strong Dakar debut, after having covered 175 kilometres on his KTM Rally Replica run by the KTM Red Bull Factory Team.  He was classified 85th overall out of 160 competitors in the two-wheeler category.

The Dakar cannot be won in the first stage, but it sure can be lost – as defending champion Nani Roma may have found out after he had to stop after tackling a bump a few kilometres. The Spaniard stopped for several hours, and it would take a miracle for him to win in Buenos Aires. The other side of the coin is his teammate Nasser Al-Attiyah, who made the most out of his supercharged Mini and is on the hunt for a second overall victory to go with the one he earned for Volkswagen in 2011. Today, the Qatari backed up his ambitions, claiming his first win this year by 22 seconds over Argentina's Orlando Terranova, also part of the X-Raid Armada.

Robby Gordon, still looking for his maiden overall win after taking several stages, sits in third place, one minute behind the winner, while Giniel de Villiers (Toyota) also has good reason to be hopeful. The eagerly awaited Peugeots had a so-so start to the rally, with Carlos Sainz in eighth place, two minutes behind Al-Attiyah and two places ahead of Stéphane Peterhansel, who probably was expecting something more from his debut with the brand of the lion. Cyril Despres, on the other hand, has already lost 10 minutes to the leader.