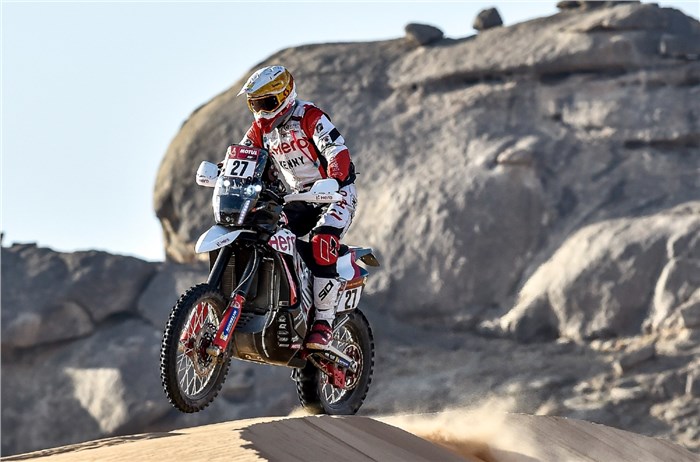 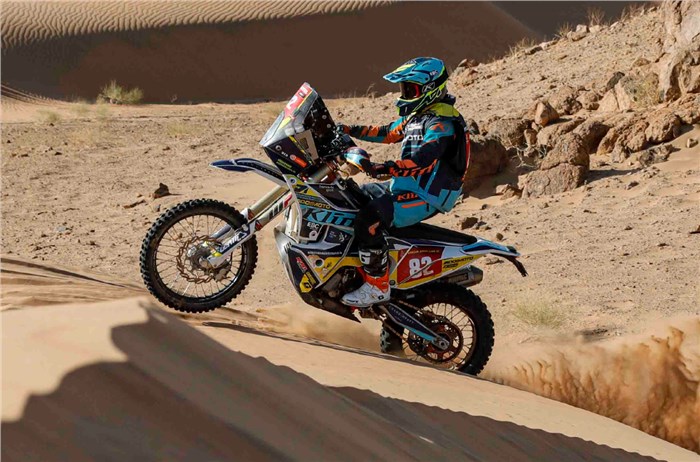 Stage 2 of the 2021 Dakar Rally saw Hero MotoSports make some significant gains with Joaquim Rodrigues breaking into the top 20, while CS Santosh and Sebastian Buhler also climbed up the order.

The 457km long stage gave competitors the first taste of the sand dunes in Saudi Arabia, combined with sandy tracks. The soft sand proved to be big challenge, with even overnight leader Toby Price finishing down in 28th place.

Rodrigues and Buhler in top 15

Leading the charge for Hero MotoSports, Joaquim Rodrigues turned a leaf to deliver a much more confident run in Stage 2. He lost some time after his Hero 450 Rally bike briefly got stuck in the sand. But other than that, the Portuguese rider says he’s started to find his rhythm. A 12th place result in the stage propels him to 17th in the overall ranking.

Sebastian Buhler wasn’t too far behind, finishing the stage in 14th place. Improving on his overnight standings, he is now placed 24th overall.

CS Santosh believes his Stage 2 run was a good start in the right direction for him. A solid result of 36th place has helped him gain a handful of positions in the standings and he’s now 36th overall. “I started the stage with a lot of motivation today,” he said.

“It was a fast stage and the new bike started feeling really good and safe, so I am really happy with that. I am slowly building my confidence and if I can continue like this for the rest of the stages, I think I will be in a really good position by the time the rally finishes. So, today was a good start in the right direction for me.”

Harith Noah, who is competing with the Sherco Rally Factory Team following TVS Racing’s decision to opt out of Dakar 2021, holds on to 31st place in the overall order. He did lose some time due to a navigation error and was also plagued by a technical issue, but managed a 32nd place result in Stage 2.

The first and only Indian to compete in the unassisted Malle Moto category of the Dakar Rally, Ashish Raorane had to tackle a steep learning curve as this was his first time riding the KTM 450 Rally Replica on sand dunes. He had a few small tumbles, but got used to the bike and the soft sand as the stage progressed.

In what was a great display of sportsmanship, he also handed his spare clutch disc to KTM’s top rider Matthias Walkner after the latter was left stranded in the sand due to clutch issues. Raorane ended up completing the stage in 86th place, which sees him gain one place in the overall standings.

Dakar 2021 to be broadcast in India on 1Sports