Lorenzo Santolino was forced to retire from the Dakar Rally for the second year running, but Harith Noah managed to secure his best result yet. 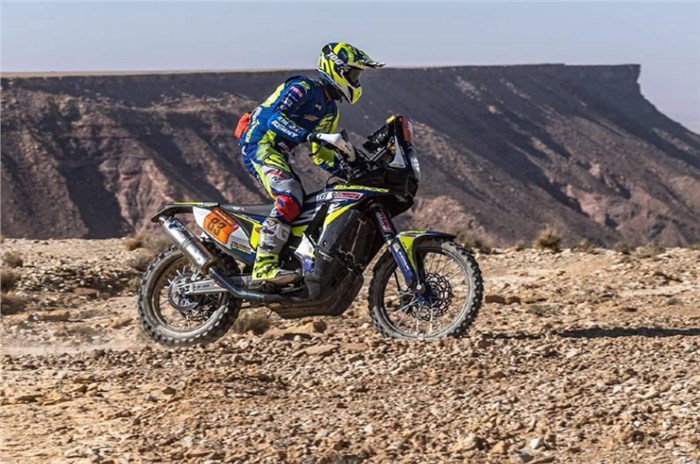 It’s been a sombre few days as the motorsport community mourns the loss of Portuguese rally veteran Paulo Gonçalves, but the 2020 Dakar Rally races on. Since Stage 8 was cancelled for the bike and quad riders, Stage 9 saw participants resume their Dakar campaign as they undertook a 476Km journey from Wadi Al Dawasir to Haradh.

Hero MotoSports’ decision to withdraw from the event in the wake of Gonçalves death has left Sherco TVS as the sole Indian team in the 2020 Dakar Rally. Unfortunately, Stage 9 ended up bringing more challenges for the team. For a second year running, Lorenzo Santolino has been forced to retire from the rally. The Spanish rider was 16th in the overall standings, but was evacuated from the stage after complaining about pain while riding. This is the team’s second retirement this year; Johnny Aubert pulled out in Stage 6 after suffering injuries to his head and ribs following a crash. However, it remains to be confirmed whether Santolino will return to compete in the remaining three stages under the newly-introduced Dakar Experience class.

However, there were some positives for the team with Dakar debutant Harith Noah registering his best finish yet, completing the stage in 29th place. After retiring in Stage 3, the Indian rider has been running in the Dakar Experience class, and as a result he doesn’t qualify for an overall rank. Nevertheless, he’s put on a spirited display in subsequent stages and will be looking to further improve on his stage rank going ahead.

Pablo Quintanilla resisted pressure from Toby Price, Joan Barreda and Ricky Brabec to take his and Husqvarna’s first stage win of the 2020 Dakar Rally. However, Brabec did well to limit the damage and finished only 4 minutes behind Quintanilla to hold on to the overall lead in the bike category. The car category also saw a close fight with Stephane Peterhansel winning Stage 9 by just 15secs from reigning Dakar champion Nasser Al-Attiyah. Carlos Sainz continues to lead in the overall standings, but his lead has been significantly slashed after he suffered a flat tyre early on in the stage.  As a result, he now holds only a narrow 24sec lead over Al-Attiyah.