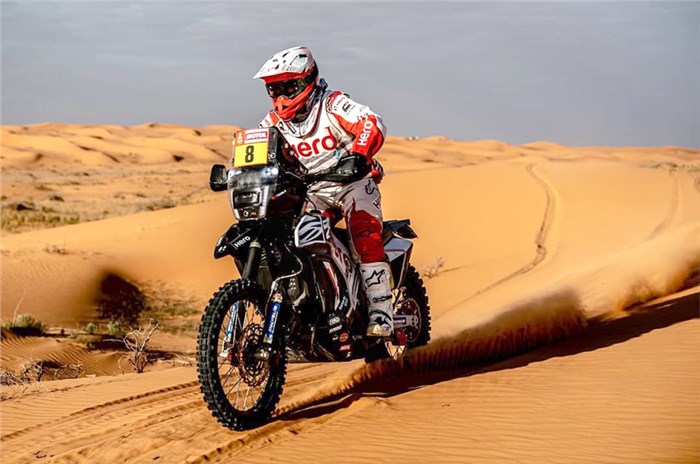 Prior to withdrawing, Hero MotoSports only had CS Santosh in the running for an overall rank, with the Indian rider placed 35th overall.

Hero MotoSports has decided to withdraw from the 2020 Dakar Rally in the wake of the tragic demise of the team’s star rider Paulo Gonçalves. The Portuguese rally veteran died from his injuries after he took a fall in Stage 7.

An official statement released by the team says, “The entire Hero MotoSports Team is in deep mourning after the tragic demise of our rider Paulo Goncalves on Sunday. With immense respect for our departed teammate, Hero MotoSports will not continue its participation at the Dakar Rally 2020. The other riders, along with the team management and support staff, will join the grieving family of Paulo.”

According to a statement released by the Dakar Rally, Gonçalves suffered a crash 276km into the stage and by the time medical personnel reached him, he was already unconscious after going into cardiac arrest. The 40-year-old was then flown to Layla Hospital, where he was unfortunately pronounced dead. Following the incident, a decision was made to cancel Monday’s Stage 8 for bikes and quads.

Having made his Dakar debut in 2006, Gonçalves was a standard fixture in the iconic event. He’d finished in the top 10 four times, including being runner-up in 2015. After spending a number of years racing for Honda, he moved to Hero MotoSports in April 2019 to race alongside his brother-in-law Joaquim Rodrigues, and went on to secure some strong results for the Indian team at the 2019 Silk Way Rally and Rally of Morocco.

Prior to withdrawing from the 2020 Dakar Rally, Hero MotoSports only had CS Santosh in the running for an overall rank, with the Indian rider placed 35th overall. Rodrigues and Sebastian Bühler were running under the newly-introduced Dakar Experience class after retiring on Stage 1 and 6 respectively. Since making its Dakar debut in 2017, the team had previously enjoyed a strong run at the event, finishing in the top 10 in the last three editions.

This year’s Dakar Rally marked Gonçalves’ 13th time participating in the event; and despite facing some setbacks, he’d made several appearances in the top 10 this year too. In fact, the rally veteran was responsible for what was perhaps one of the stand-out showcases of grit and determination so far in the 2020 Dakar Rally. After being hit with an engine issue in Stage 3, he’d refused to give up and after a 6hr wait for a replacement engine, he proceeded to change the engine himself and continued the stage in the late hours of the night. A man of indomitable spirit, he bounced back from the incident with a stellar 4th-place finish in the next stage. At the end of Stage 6, he had managed to climb from 111th to 46th in the overall standings.