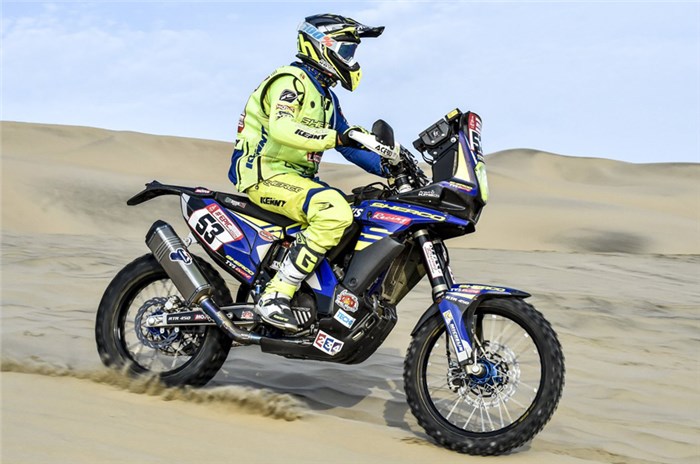 The fifth stage of the 2018 Dakar Rally saw participants make their way from San Juan de Marcona to Arequipa, the rally’s last stop in Peru, before moving into Bolivia. With organisers separating the route for different categories, the cars and trucks were the first to make their way through the mammoth 774km route, followed by the quads and bikes.

It was an overall positive stage for Hero MotoSports Team, with Oriol Mena clocking in his best stage of the rally yet, with a 11th place finish. Mena’s impressive performance helped him climb up to 21st in the overall standings. CS Santosh decided to play it safe, finishing the stage 52nd, taking him to an overall ranking of 51.

“It was probably one of the toughest stage of the Dakar 2018 and new experience for me. I am really happy to finish well without any major mistakes. The first part was yesterday’s stage in reverse with a lot of navigation involved. The last 53km was made of extremely soft sands and there were cars and trucks stranded everywhere, but I managed that section well. Now, we have about 450km to make it to the Bivouac at Arequipa and it will be another day in the bag,” said Mena.

The Sherco TVS Factory Rally Team’s campaign took a big hit, with Aravind KP suffering an ankle injury after crashing out. However, Joan Pedrero put in a solid performance to finish the stage in 18th place, giving him an overall standing of 15.