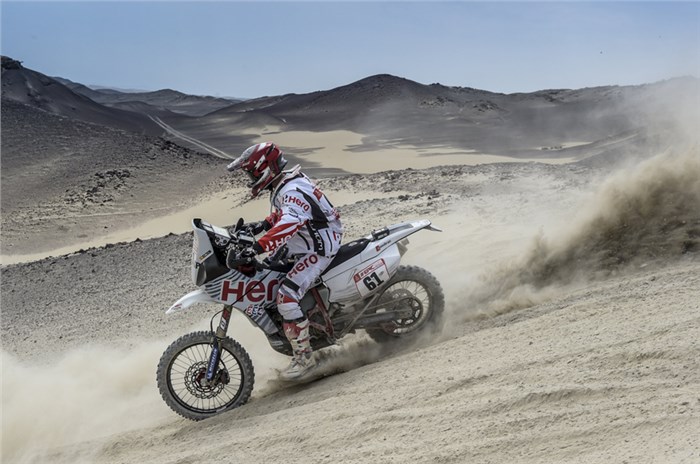 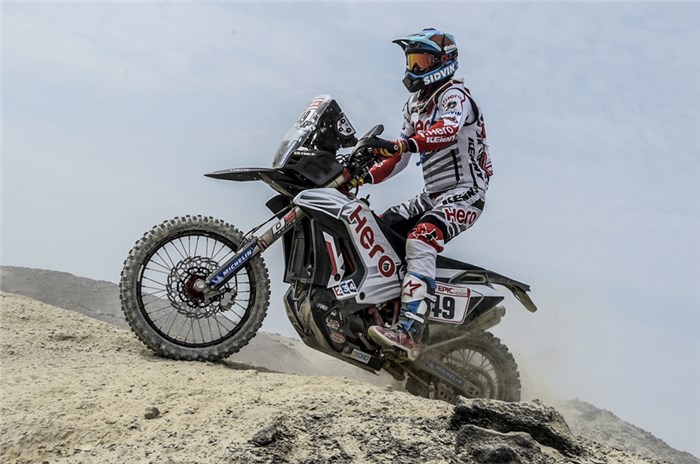 Stage 1 kicked-off the 2018 Dakar Rally with brief 31km, timed section. It was the second stage, though, which saw competitors make their way through tricky canyons and a series of dunes – and thus offered the first true taste of the grueling challenges of the rally. Being the first full-length stage of the rally, Stage 2 consisted of a short 12km liaison section, followed by a 267km loop of Pisco.

Both remaining Hero MotoSports Team Rally riders took a more cautious approach to the stage. Oriol Mena finished in 27th place and CS Santosh completed the stage at 29th place. Joaquim Rodriguez’s participation in the rally was brought to an abrupt end, due a crash at the half-way mark of Stage 1.

Mena and Santosh now stand in 27th and 28th place, respectively, in the overall standings.

Speaking after the completion of Stage 2, Santosh said: “The Dakar really kicked off today with a difficult stage. The sand was really soft and some of the dunes were really massive. I started really slow but then gained a good rhythm. I had fun today and really happy to make it to the end of day two.”

The Sherco TVS Factory Rally Team endured a tough stage. Joan Pedrero had a good start to the stage but lost between 10-15min after his bike broke down, 2km from the refueling station. He eventually managed to complete the stage at 22nd place, sitting 23rd in the overall standings. Aravind KP continued with good pace to secure an overall 40th place. In a setback for Sherco-TVS, Adrien Metge had to retire from the rally midway through Stage 2 after crashing and fracturing his tibia.