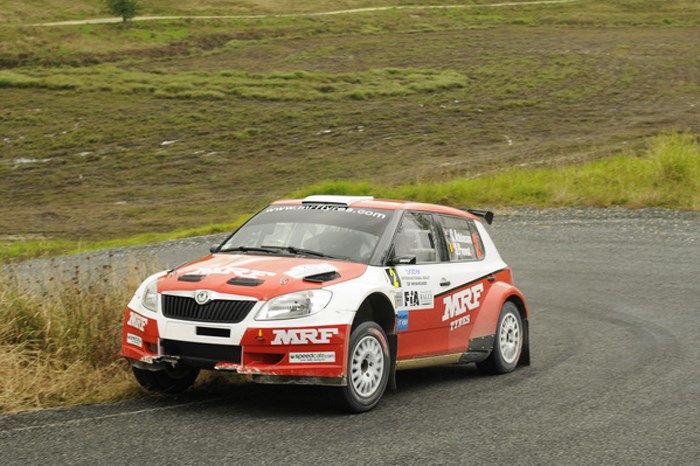 In his first event with the Indian team, Chris Atkinson won the Brother International Rally of Whangarei – the opening round of the 2012 APRC season. Piloting the MRF Skoda Fabia S2000, the Australian seldom looked under threat despite being pushed hard by second-placed finisher PG Andersson driving the Proton Satria Neo S2000 – the car Atkinson drove last year.

Behind the wheel of the Race Torque-prepared Fabia S2000, Atkinson took the lead in stage two and never looked back – the win marking his second consecutive victory at the event, having won it with Proton last year.

“It's fantastic. The whole MRF Team and the Race Torque boys have been amazing all weekend and I can’t thank the team enough,” Atkinson said.

“The car has been faultless, and the tyres have worked really well, and apart from one mistake from me on the last group of stages, it's been the perfect weekend.

“It’s a great start to the championship and an awesome effort by the MRF Skoda team, considering this is a new venture for all of us driving and running the Fabia S2000.

“It was hard going running first on the road on day two, which lost us some time sweeping the loose gravel off the hard surface, but there’s no better way to start a championship than with a win and we’ll be looking to roll this form into round two in New Caledonia in a few weeks’ time.”

Running out of Whangarei, to the north of Auckland, the rally consisted of 16 competitive stages over two days.

New for the season is the “power stage” formula, adopted by APRC from the WRC points system, offering bonus points to the top-three fastest times over the final stage of the rally.

Indian Gaurav Gill, secured the final podium spot on the podium, edging out the reigning APRC champion, Alister McRae, who struggled to keep up with the pace of the two Skodas in his Proton Satria S2000.

Team MRF’s Anthony Rodricks was full of praise for the team as well.

“The victory was significant as MRF has never won an APRC rally in New Zealand before. What is more remarkable was for Race Torque to put together the entire package in a short period of time.

“We did just one day's testing, with a very different car – the Skoda Fabia S2000 while our technical team worked tirelessly to develop tyres that would adapt to the modified S2000 cars.

“Gill's performance was exceptional, as unlike Atkinson, who drove the Proton S2000s before, he had no S2000 experience at all.”

Round two of the APRC takes crews to the French colonised Pacific island of New Caledonia for Rallye de Nouvelle Caledonia from April 28-29.