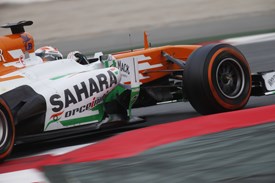 Adrian Sutil says he has a new-found determination to succeed in Formula 1 after being given a second chance by Force India.

As we reported earlier, Sutil has been given the nod by the Silverstone-based team to race alongside Paul di Resta. The team confirmed the deal during testing on Thursday.

His return to F1, after a year on the sidelines, comes despite a conviction for grievous bodily harm that was handed down for his part in an assault on Lotus co-owner Eric Lux at the 2011 Chinese Grand Prix.

Speaking about the opportunity - which denies Jules Bianchi an F1 chance - Sutil said, "Having been away from the sport, I'm even more determined to achieve my goals in Formula 1. Things went really well at the Barcelona test last week and it almost feels as though I've never been away. Driving the car felt so natural and I was able to get back in the groove quickly and find the limit. Now my focus is on making the most of the final test session this week, working with the team in the simulator and getting myself in the best possible shape for Melbourne."

Sutil will test for Force India at Barcelona today and tomorrow, with di Resta completing the pre-season's preparations on Sunday. Force India owner Vijay Mallya said Sutil's five years of F1 experience had been the key factor in him beating Bianchi to the seat. "The decision over our driver line-up has not been an easy one and we have given it great consideration over the last few months," said Mallya.

"It was a close call, but ultimately we felt that Adrian's experience and historic links to the team gave him the edge, and will provide us with the best possible chance of realising our ambitions for the coming season. If he can rediscover the exceptional form he showed in the second half of 2011, I'm confident that we can pick up where we left off at the end of 2012."

Mallya added that he hoped Bianchi would stay on at the outfit in another role.

"He has impressed us enormously with his speed and work ethic, and I'm hopeful we can continue working with him this year to help him develop into a future grand prix driver."