Five women drivers and co-drivers will join the 2021 INRC grid after winning a nation-wide talent hunt. 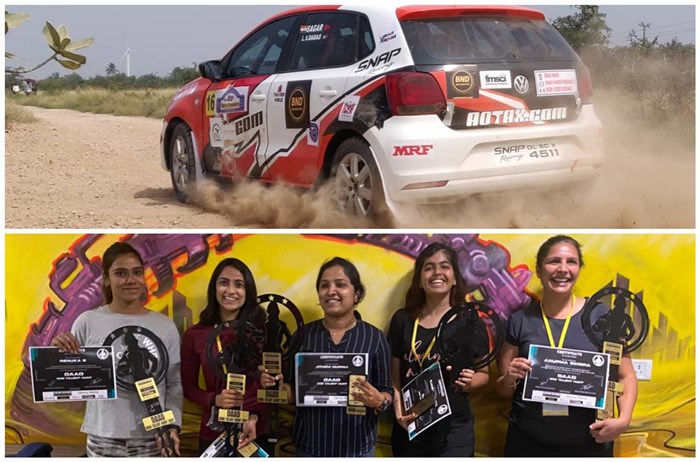 Last year’s INRC had Dr Bani Yadav and Pragathi Gowda join forces, forming an all-women driver pairing for Team Vasundhara in the INRC category. And this year’s edition is all set to see even more female participation.

The selection and training programme was conducted by former Indian National Rally Champion Chetan Shivram and Vamsi Merla, director of Champions Yacht Club and promoter of the INRC. A total of 25 women from across the country were shortlisted for the event held at the Unite Off-Road Track in Bengaluru.

The participants were given beginners’ and advanced training in rally cars, with sessions conducted by rally aces Suhem Kabeer and Dhruva Chandrashekar. This was followed by one final shootout, with the winners determined by the lap times set. Athira Murali emerged as the overall winner and will be joined by co-driver George Varghese on the 2021 INRC grid.

The FMSCI – which is responsible for the governance and promotion of motorsport in the country – has been pushing hard to have more diverse representation in Indian motorsport. The body recently even announced that its various commissions will all have members representing the interests of women.

"My commitment towards supporting existing and upcoming ‘Women in Motorsports’ made me launch this initiative. We had planned this in the last year as well but unfortunately to the pandemic we had to shelf it. But with normalcy finally getting restored in the country we finally went ahead this year and now here we are with 10 highly talented women finally getting the platform and support they deserve,” said Merla.

He also added that the INRC is planning to make this talent hunt an annual event. “We even fully sponsored the selection round and took care of all expenses of the participants including travel, stay, rally cars, training. This is the first event of its kind happening in the history of INRC and we have plans to make it a yearly affair. I am really looking forward to seeing these ladies on the track and hopefully this will mark a new beginning for Indian Motorsports”.

The 2021 INRC will comprise a total of six rounds across the country, with the first round being held in Chennai on April 23-25. The calendar features some new entries like Delhi, Hampi and Nagaland – which will host its first ever INRC round. This is the first time that INRC organisers have given hosting rights to the three venues.

Additionally, organisers have also introduced a new SUV class to “give a chance to other drivers in the country to display their skill on the national circuit”. You can head here to check out the full 2021 INRC calendar.