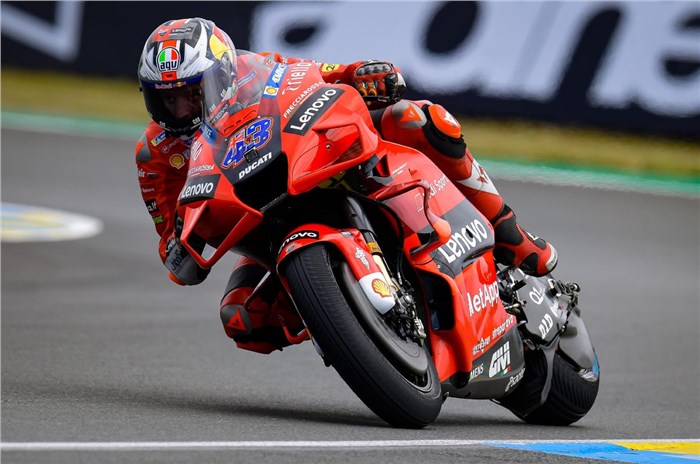 Jack Miller, racing for the Ducati Lenovo Team, clinched his second consecutive victory of the season at the French GP. The Aussie put up a brilliant fight, despite serving a double long lap penalty during a thrilling flag-to-flag race.

The conditions at the start of the French GP were tricky with dark clouds looming over Le Mans. While the race was declared as dry, and everyone lined up on the grid on Michelin slicks, their second bikes on a wet setup were ready in the pits.

As the lights went out, Polesitter Fabio Quartararo, on the factory Yamaha, made a good start but he was no match for the sheer speed of Miller's Ducati off the line. He swooped into the lead, with Quartararo and Maverick Vinales behind.

On Lap 5, the rain began to come down hard and the riders made a mad dash to the pitlane to swap bikes. Miller made a mistake while entering the pits and failed to stick to the 60kph speed limit. As a result, he was handed a double long lap penalty.

In the ensuing drama, Repsol Honda's Marc Marquez led the race, being among the first to swap bikes and get out on track. The Spaniard used all his years of experience to master the tricky conditions and stay at the front of the field. However, a few laps later, he crashed at T14, only to rejoin towards the bottom of the field.

As the race progressed, the weather changed from dull and wet to bright and sunny, with the track drying up quickly. The wet weather tyres were losing grip due to excessive heat and it soon became a battle of tyre conservation. Riding back into the pits to hop onto bikes with slicks was not an option as negotiating the long pitlane would've been a waste of time.

Miller did well to conserve his tyres and maintained a healthy lead, despite pressure from Pramac Ducati's Johann Zarco, who charged through the field up to 2nd place. Quartararo, who was having a tough time on his wet weather tyres, managed to cling onto 3rd and deny the late charging Francesco Bagnaia, on the Factory Ducati, a podium finish.

Marquez was making swift progress after rejoining, however, he crashed again, this time with no option but to retire. This was one of his best performances after returning from a career-threatening injury in 2020, and the multiple championship winner was disappointed about losing out on a potential race win.

The next MotoGP race will take place in Italy, at Mugello, on May 30.