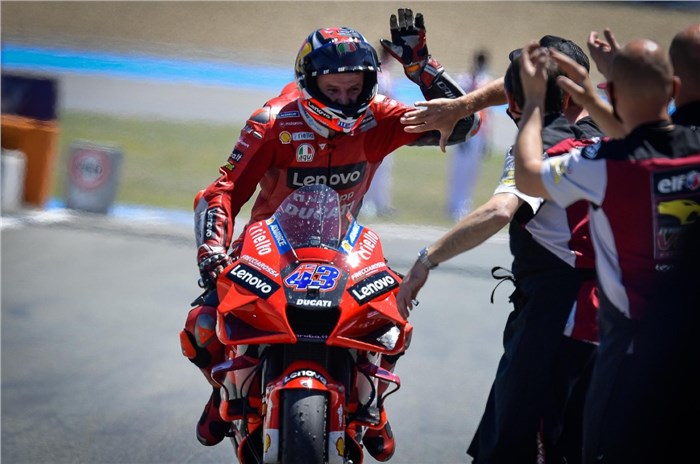 Factory Ducati rider Jack Miller stunned his critics by winning the Spanish GP at Jerez. The Aussie clinched his maiden victory on a Ducati, and this is also his first MotoGP victory in the dry.

The race began with big expectations for polesitter Fabio Quartararo. The Factory Yamaha rider looked strong all weekend and it was almost certain that he'd be one of the favourites to win the race. However, things didn't go as planned for the Frenchman.

As the lights went out, Miller on the Ducati made the most of his motorcycle's holeshot device and overtook Quartararo for the lead in the first corner. Quartararo, meanwhile, slid down to 4th in the opening laps, with Petronas Yamaha's Franco Morbidelli and Francesco Bagnaia on the other Factory Ducati ahead of him.

Quartararo, however, was having none of that and made some brilliant moves to come up on the back of race leader Miller. Then, in the final corner before the start-finish starlight, he overtook Miller for the lead.

It looked like a fairy-tale setting for Quartararo as he put in some astonishingly quick laps to pull ahead of Miller by two seconds. It was all going well when all of sudden, his lead was cut to nothing in a single lap. Miller overtook Quartararo for the lead on Lap 16 and within a few laps, the Frenchman found himself languishing outside the top 10. It turned out that Quartararo suffered an arm pump issue during the race and couldn't brake or steer effectively. A brutal reminder of what it takes to ride a MotoGP machine.

With pressure mounting on Miller to deliver a top-class performance on a factory machine, it was his race to lose as he streaked ahead of the field in the lead. As the race progressed, Miller put in consistent laps to maintain his lead, and cross the line ahead of his teammate Bagnaia.

This is the first time that Ducati has secured a 1-2 finish is Jerez, a circuit that they aren't particularly strong at.

An elated Miller stoppied and wheelied his way to Parc Ferme, amidst a rapturous welcome from people in the paddock. There was simply no doubt about the Aussie's popularity. Helmet off, Miller was in tears, having delivered a win and crucially silencing his critics.

Quartararo's issues turned out to be Bagnaia's gain as he found himself in the lead of the 2021 MotoGP World Championship at the end of the race. Bagnaia, in fact, had pretty good pace towards the closing stages and looked set to challenge Miller for the lead, before the chequered flag was out.

As it stands, Bagnaia has 66 points in the bag, followed by Fabio at 64 points and Maverick Vinales in third at 50 points.

The next race will take place at Le Mans, France, on May 16.

MotoGP rider Maverick Vinales talks about his approach to racing, the YZR-M1 and more