Fabio Quartararo picked up his second win of the season, ahead of Francesco Bagnaia and Joan Mir. 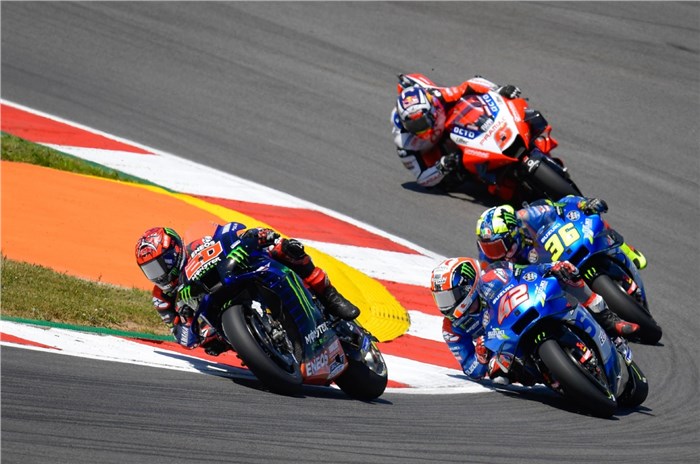 After two weekends at the Losail International Circuit, the MotoGP paddock moved to the Algarve International Circuit for the Portuguese GP. Fabio Quartararo emerged victorious and climbed into the lead of the championship table, but all eyes were on Marc Marquez as he returned to competition after missing the last 15 races due to injury. The eight-time champion crossed the line in an impressive 7th place.

Marquez suffered a nasty high-side in the opening round of the 2020 MotoGP Championship that resulted in a broken right humerus. After multiple surgeries and months of rehabilitation, the Spaniard made his return to racing after 265 days. He managed to qualify in an impressive P6, but considering he isn’t back at optimum fitness and psychological levels, many didn’t expect him to finish in the top 10 after 25 arduous laps. However, Marquez was as keen as ever, and climbed up to 4th, going into the first corner. This was short lived, and he slowly fell down the order, crossing the line in 7th place.

Fabio Quartararo does it again

At the front, Johann Zarco led on his Pramac Ducati and stayed at the front of the pack for the first five laps. Soon after, Alex Rins made his way to the front, but was soon victim to the speeds that Ducatis are capable of on the straights. By lap 10, Ducati’s Jack Miller and KTM’s Miguel Oliveira had crashed out, with the latter managing to rejoin. At this stage of the race, four riders were in contention for the win – Quartararo, followed by Rins, Mir and Zarco.

Zarco was hot on the tail of reigning world champion Mir, as the duo were slowly closing the gap to Rins in 2nd place. Unfortunately, with seven laps to go, Rins crashed out of the race. By this point, factory Ducati rider Francesco Bagnaia had made his way up to 2nd place, after starting in P11, but the gap between Quartararo in front and him was too wide to bridge. Zarco was running strong in 3rd place, but he crashed out as well, ending his hopes of remaining at the top of the championship table.

The retirements of Rins and Zarco meant that Márquez made his way to7th place at the chequered flag, one place ahead of his brother Álex. Brad Binder impressed again, atop the KTM, bringing home a 5th place finish. Maverick Vinales, despite winning the opening race of the season, was down to 20th at the end of the first lap and managed to salvage 11th. He headed Luca Marini (Avintia), Tech 3’s Danilo Petrucci, Aprilia’s Lorenzo Savadori and the other Tech 3 bike of Iker Lecuona, while last year’s Portugal race winner Miguel Oliveira was 16th after a crash.