Fabio Quartararo won the second race at the Losail International Circuit, ahead of Johann Zarco and Jorge Martin. 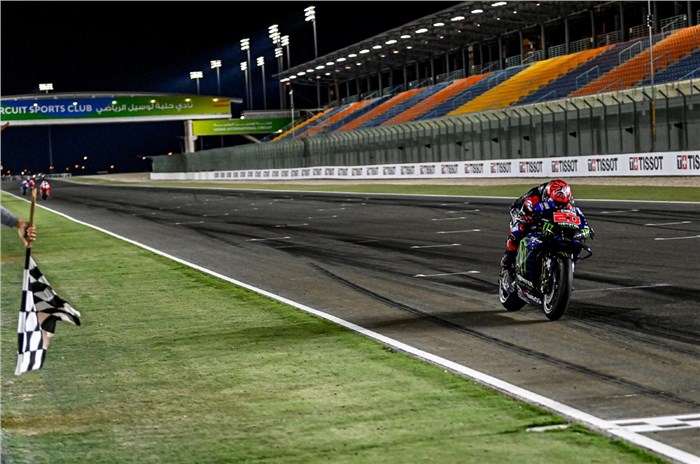 The MotoGP paddock returned to the Losail International Circuit this past weekend for the Grand Prix of Doha. What ensued was one of the most exciting races in the recent past that also saw the closest top 15 - separated by just 8.9 seconds - in MotoGP history. At the end of 22 laps, Fabio Quartararo took the win.

MotoGP rookie Jorge Martín, in only his second premiere class race, snatched a career-first pole position. 2nd on the grid was his teammate Johann Zarco, who had a pretty spectacular opening weekend as well. Last weekend’s race winner Maverick Viñales rounded out the front row on the factory Yamaha.

Off the line, Martín was off to a blisteringly fast start with his satellite Ducati out-pacing the rest of the grid into the first corner. Following close were teammate Zarco and Aprilia's Aleix Espargaró, who had an impressive start as well. Viñales was pushed down the order and found himself battling the Suzukis of Álex Rins and Joan Mir.

Alex Rins was in hot pursuit of the two Pramac Ducatis and also managed to get past Zarco on multiple occasions. However, the Suzuki could not match the straight line performance of the Ducati and Zarco  regained his position on the main straight. Towards the middle of the race, Rins managed to make a move past Zarco and made it stick while now challenging for the lead. Despite his inexperience in the category, Martin managed to hold off advances from the Suzuki.

At the halfway point, there was little separating the top nine and the factory Ducatis of Bagnaia and Miller were in 4th and 5th, respectively. On lap 13, Bagnaia slipped past Rins into 3rd, making it an all-Ducati top three. Further down the order, drama ensued between Miller and Mir, with the two making contact on a couple of occasions. However, the incident was deemed a racing incident and no penalties were awarded.

Fabio Quartararo, after starting 5th, fell back a couple of places. But, in the latter stages of the race, he began to find his rhythm and inched his way back into podium contention. With five laps to go, he moved up to 3rd and was right behind fellow Frenchman Zarco. At the end of the lap, he slid into 2nd and briefly moved into the lead as well, but again, was outpaced by Martin on the main straight.

With just a couple of laps to go, he made another move to the front and this time around, made it stick. Slowly, he began to build a lead as the satellite Ducatis behind him were now in a battle for the second step on the podium. Quartararo took the win, and Zarco managed to edge past Martín, fractions before the finish line.

The late surge and consecutive second place finish mean that the Frenchman now leads the championship with 40 points.

Down the order, Bagnaia was the top factory Ducati team rider in 6th ahead of Mir, while Brad Binder was rewarded with an 8th place finish after starting way back in 18th. His teammate Oliveira was off to a strong start, at one point climbing up to 5th, but crossed the line in 15th. Jack Miller finished 9th, while Aleix Espargaro completed the top 10 on the Aprilia.

Enea Bastianini recovered from 19th to 11th on the Avintia Ducati, with Franco Morbidelli finishing 12th. His teammate in the Petronas SRT Yamaha team, Valentino Rossi, had one of his worst race weekends ever, crossing the line in 16th place after starting from a career-low 21s. Alex Marquez (LCR Honda) and Tech 3 KTM’s Iker Lecuona crashed out.

The MotoGP paddock heads to Europe for the Portuguese Grand Prix a couple of weekends from now and it’s certainly going to be an interesting race considering Marc Márquez may make his return to the championship as well.