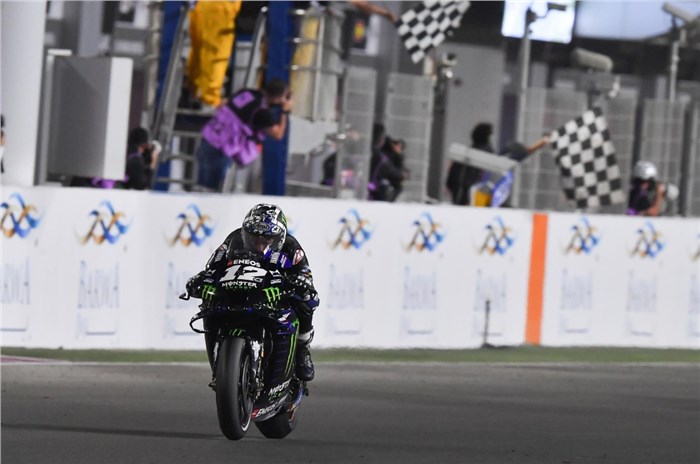 Vinales won the opening race of the 2021 MotoGP championship, ahead of Zarco and Bagnaia.

The first race of the 2021 MotoGP championship brought a fair share of excitement and close racing. At the end of 22 laps at the Losail International Circuit in Qatar, Maverick Vinales was the first to cross the line, followed by Johann Zarco and polesitter, Francesco Bagnaia.

Despite early dominance from the Ducatis, Maverick Vinales, who started 3rd, managed to stitch together a slew of fast, clean laps that got him to the front of the pack. He managed to hold onto an undisputed lead after that, while the rest of the podium places were up for grabs up until the final few metres.

In his first race for the factory Ducati team, Bagnaia started his season with a bang by qualifying on pole, ahead of Fabio Quartararo and Viñales. He got off the line rather quickly as well and was leading the first half of the race, ahead of teammate Jack Miller and the Pramac Ducati pair of Zarco and rookie Jorge Martín, who climbed to 4th after starting 12th.

However, Martin was unable to match the race pace of the riders in front of him and was passed by the factory Yamaha riders, Viñales and Fabio Quartararo. Quartararo also had an impressive few laps and was running in 2nd at the midway point.

At the midway point of the race is also when Viñales made his move up to 3rd place. With 11 laps remaining, Bagnaia's lead came under threat from Viñales and he fell back to 2nd. Bagnaia's 2nd place soon became 3rd, as Zarco claimed the position with five laps to go. The French rider's aspirations to finish in 3rd were also soon under pressure as the defending champion, Joan Mir, started to size him up for an overtake. Mir followed Bagnaia closely and made his move going into the penultimate corner. Going into the last corner, Mir was defending pressure from the Ducatis of Bagnaia and Zarco and ran wide. The two Ducati riders managed to stay on the race line and their bikes - that have proved to be quicker on the straight - outpaced Mir’s Suzuki, to claim the last two spots on the podium.

Suzuki, Ducati and Yamaha all had reason to celebrate, but the same can’t be said for KTM and Honda. Marc Marquez was not on the grid, as he continues to recover from an injury sustained in the opening race of the 2020 season, and is expected to join the paddock for round three in Portugal. Honda’s factory rider Pol Espargaró finished the race in 8th place, ahead of podium hopeful Miller. The two LCR Honda riders, Taka Nakagami and Alex Marquez, crashed out in the race.

The teams will meet again in just a week’s time at the same circuit for round two of the 2021 MotoGP championship.

Who do you think stands a chance at being champion this year? Let us know in the comments below.