Compass prices start at Rs 14.95 lakh; deliveries of the petrol variant to begin around Diwali this year. 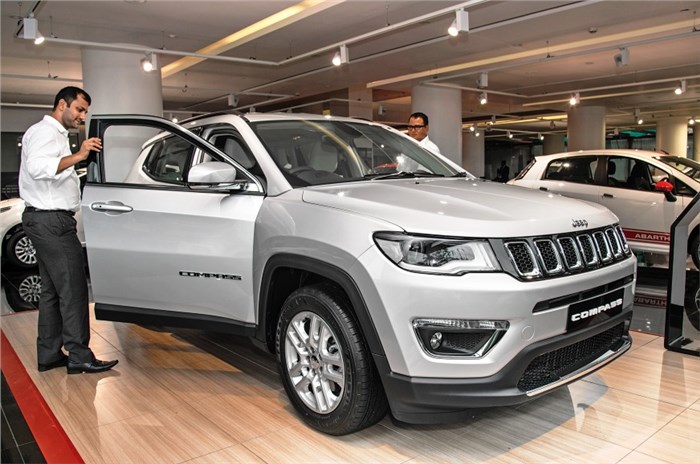 Since its entry into India in September 2016, Jeep has been working hard to expand its footprint in the country. The SUV-maker now has 50 dealerships and plans to expand to 60 retail outlets by December 2017. While a few outlets are new, most are FCA’s existing Fiat dealers.

The made-for-India Compass, Jeep's first ‘mass market’ product, is priced starting at Rs 14.95 lakh. Two engine options are on offer – a 162hp, 1.4-litre petrol and a 173hp, 2.0-litre diesel. While the petrol gets the option of a six-speed manual and a seven-speed dual-clutch automatic gearbox, the diesel is offered with only a manual for now. A nine-speed automatic is expected to launch by January with deliveries for the model to start around February.

The manufacturer announced that it has gathered around 5,000 bookings within 40 days, with a split of 60:40 in favour of the top-spec diesel model. Deliveries for the Compass diesel will start on August 6, 2017, and the petrol variant around Diwali.

Jeep is offering the Compass with a warranty of three years/1 lakh kilometres.

Along with the launch of the Compass, Jeep also announced the entry of its Mopar sales and performance brand in India which will offer various service packages and extended warranty options for all its models. At an aggressive starting price of Rs 14.95 lakh for the petrol and Rs 15.45 lakh for the entry-level diesel, the Compass now rivals the likes of the Mahindra XUV500, Hyundai Tucson and the Honda CR-V.