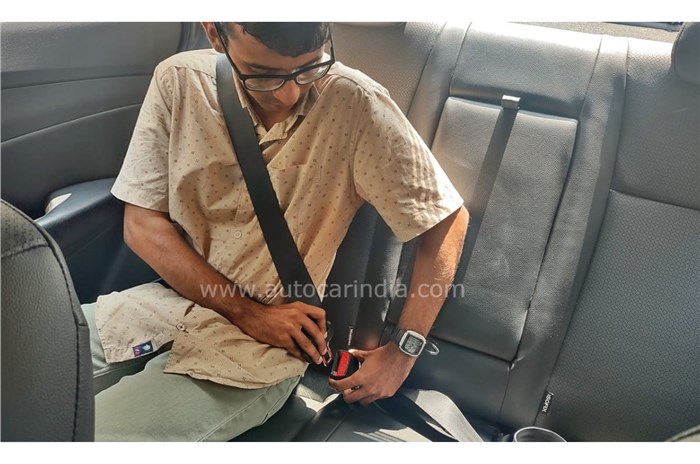 Union Minister of Road Transport and Highways Nitin Gadkari said his ministry is looking at making a seat belt warning alarm system mandatory for rear seat passengers. Gadkari said a notification will also be issued in the next three days detailing a penalty structure for rear seat occupants who are found not wearing seat belts.

While road safety and automotive experts are stressing upon the dire need of using rear-occupant seat belts in passenger vehicles, Gadkari too acknowledged the importance of buckling up at the back. The seat belt warning alarm is currently mandated for the front passengers, but it will now also be mandated for rear-seat occupants, he said.

Addressing an event organised by Business Standard on September 6, the minister said, “The irritating beep will compel rear-seat occupants to belt up as well.”

Although a fine of Rs 1,000 is already in place under Article 138 (3) of the Central Motor Vehicle Rules (CMVR), the problem seems to be more about user behaviour and enforcing the regulations. Most people in India overlook belting up in the rear seats of a car, often assuming they are in a much safer place since there is no dashboard or steering wheel right in front of them.

Crash tests conducted by the Insurance Institute for Highway Safety (IIHS), a US-based non-profit organisation, suggest that if a car encounters a frontal collision while travelling at 56kph, the rear seat occupants will be sent flying to the front. This means that the rear seat occupants will not only risk their lives but also the lives of occupants in the front, despite the latter wearing their seatbelts and the car being equipped with multiple airbags.

Earlier this year, the ministry had issued a draft notification to mandate six airbags in all passenger vehicles with a seating capacity of up to eight occupants, starting October 1, 2022. Even though the automotive industry has reacted saying this would send the prices of cars soaring, especially those at the entry-level of the spectrum, the recent incident has again brought light to the fact that seat belts remain the primary means of ensuring safety inside a passenger vehicle, followed by airbags, which are the supplemental restraint systems.

Upward trend of accidents in India

Gadkari's statement comes days after the recent road accident that resulted in the death of former Tata Sons and Tata Motors chairman Cyrus Mistry. As per the latest data on road safety, there is an upward trend – both in terms of accidents and the number of lives lost in the country. The National Crime Record Bureau’s report on Accidental Deaths in India 2021 released last month reports a total of 4,03,116 road accident cases last year. This is an increase of 13.61 percent year on year. While fatalities in road accidents have increased by 16.83 percent, from 1,33,201 in 2020 to 1,55,622 in 2021, a total of 3,71,884 people were injured, up 11 percent on 2020’s 3,35,000.