Brought in as a flex fuel technology showcase, the Toyota Corolla hybrid makes 102hp and 142Nm from its 1.8 petrol engine and 73hp and 163Nm from the electric motor. 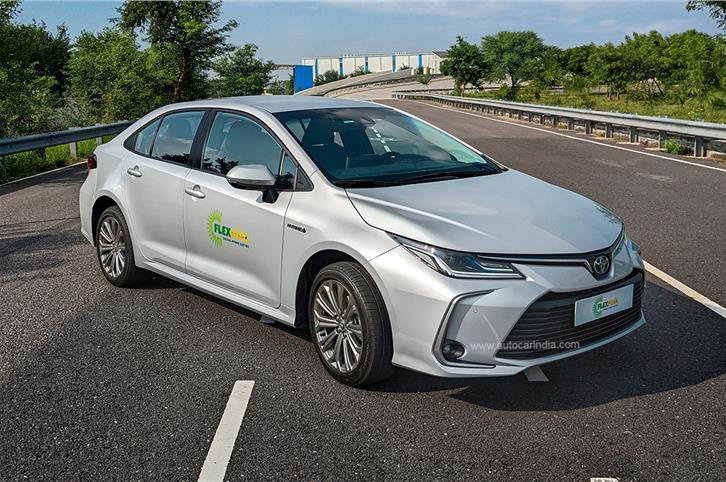 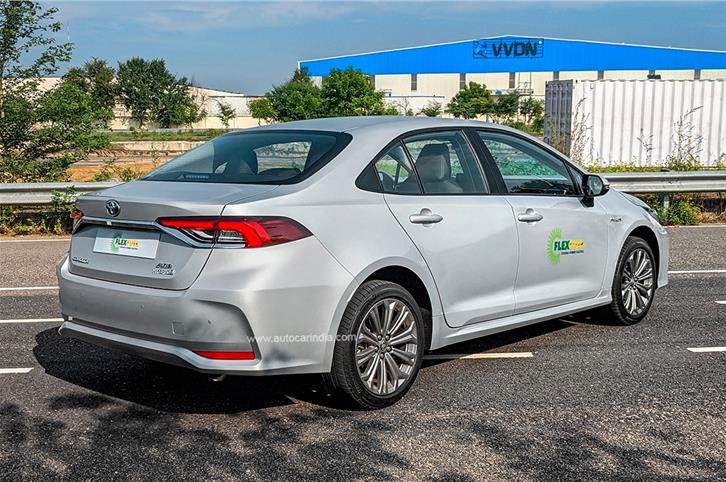 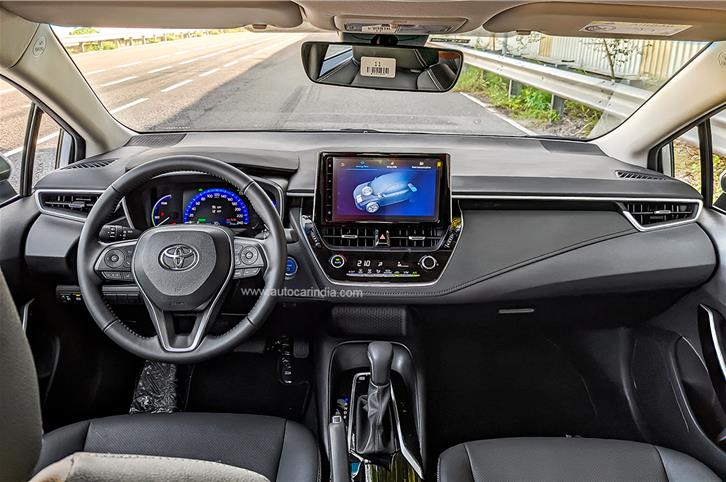 While the Indian government – and more specifically, the Union Minister for Road Transport and Highways, Nitin Gadkari – has been campaigning for the use of flex-fuel vehicles, Toyota India has also shown interest and unveiled a flex-fuel Corolla hybrid.

The car, a left-hand-drive Corolla, is imported from Brazil – where the flex-fuel market is well developed – and is meant to bring attention to flex-fuel vehicles in India. And while the 11th-generation Corolla was earlier sold here, there are no plans for now to introduce this current, 12th-generation model.

We were invited to a small drive at the International Centre for Automotive Technology’s (ICAT) test track in Manesar, and so here are a few brief impressions of the car’s engine and performance.

Under the hood of this Corolla is a flex-fuel-capable 1.8-litre petrol engine that makes 102hp and 142Nm of torque. It’s coupled with a 72hp electric motor, which has a max torque of 163Nm, and is fed by a 1.3kWh battery that’s continually charged on board. It’s a typical strong hybrid system, just like in the Hyryder, which means, on a very light foot, it can motor along on just electric mode. As soon as you demand some more, the engine kicks in, and while you can hear it, you don’t really feel it coming in; the switching of power is seamless too. 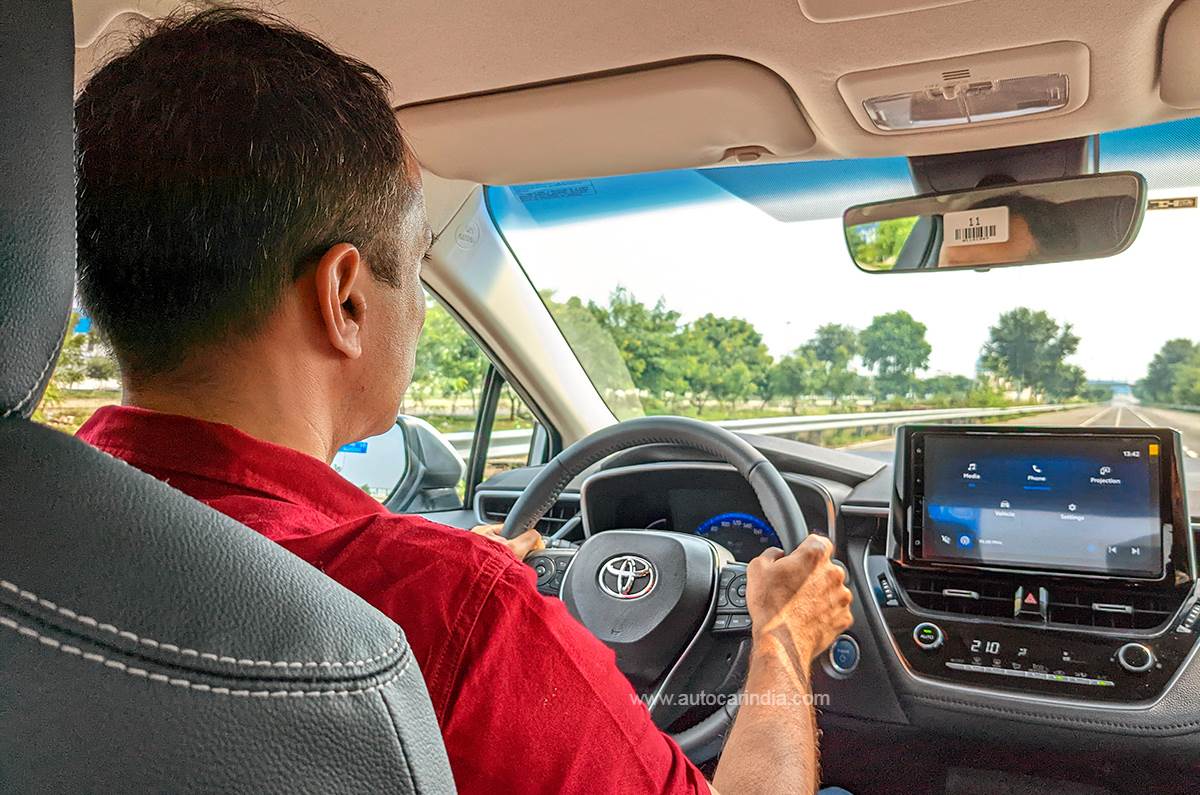 Similar to the Hyryder, the Corolla flex fuel hybrid can also run in pure EV mode.

What is quite different to Toyota’s SUV is the sprightly performance of the 1.8-litre engine, which is quite a welcome contrast to the dialled-down feel the Hyryder’s 1.5-litre engine delivers. The Corolla picks up pace quickly and acceleration is brisk all through. Out in the real world, it will deliver a strong highway performance. The gearbox is what Toyota calls an e-CVT, which essentially is a sun and planetary system, like in a traditional automatic, but it’s set-up to provide infinite ratios. 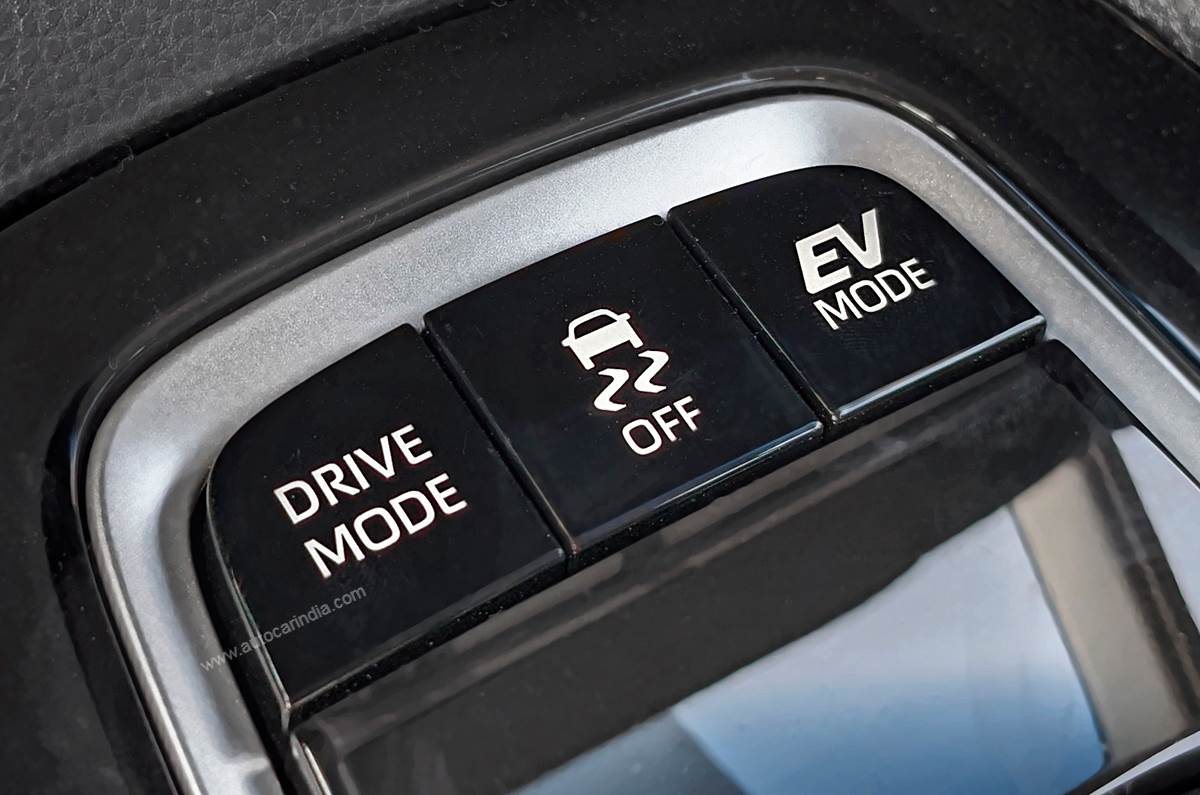 The Corolla flex-fuel hybrid has drive modes and a dedicated EV mode button.

And while, curiously, in the Hyryder – which also uses a similar set-up – the rubber band effect is present, it didn’t appear to be present in the Corolla. On the whole, the powertrain refinement is good and, all in all, the flex-fuel engine feels just like a regular petrol, which it essentially is. The only significant difference a flex-fuel vehicle owner will see against a regular petrol model is lower fuel efficiency, due to the lower energy density of ethanol.

That’s where the Corolla’s strong hybrid system comes in. Like in the Hyryder, Toyota says, driven normally, the car should motor along in EV mode for around 50 to 60 percent of the time, which more than compensates for the efficiency loss. 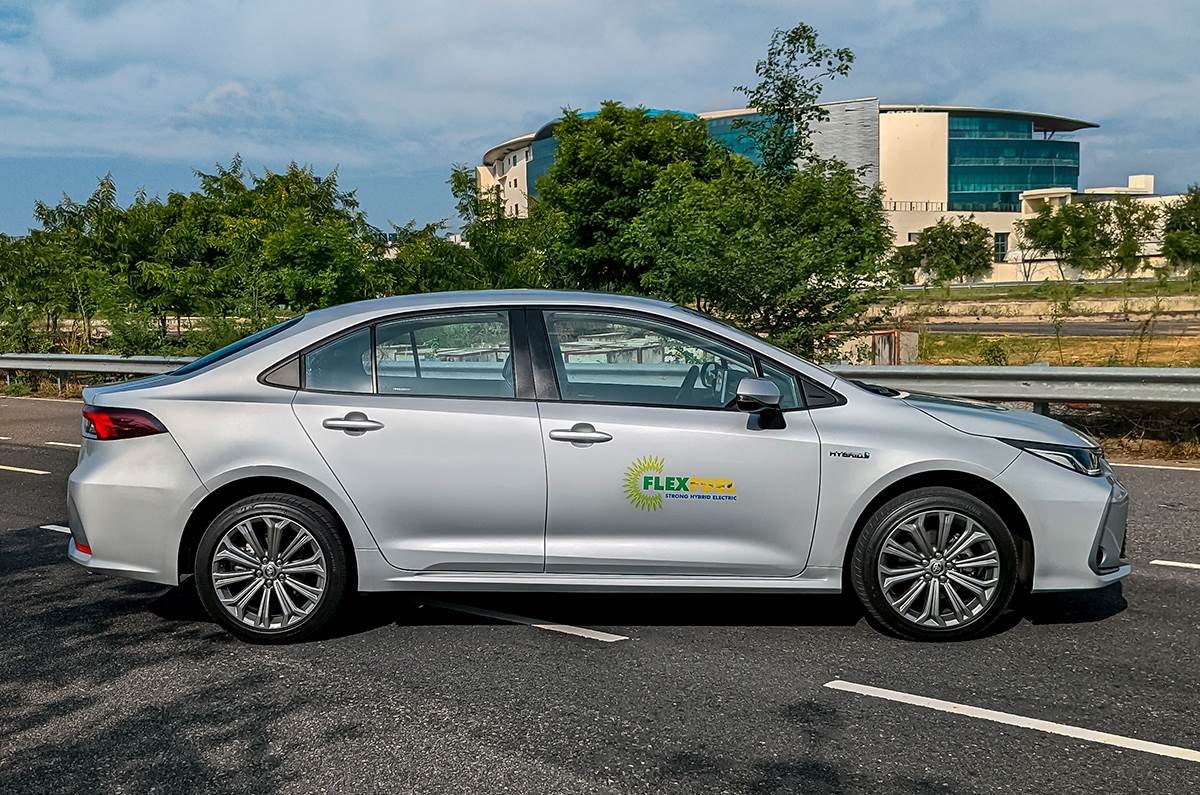 Design of the Toyota Corolla flex-fuel is reminiscent of the Camry.

Given that this car isn’t scheduled to launch in India, we focused our little time on the engine, but I had to stop for a while and admire the new Corolla’s lines. I’ve never been a big fan of early Corolla styling and it was only the Altis that, to me, had some excitement, and it was nice seeing that in the current car too. It reminds you of the Camry in a way, and the tipped forward stance, sleek headlights and aggressive bumper cuts add a nice touch of sportiness. At the rear too the car looks quite smart. 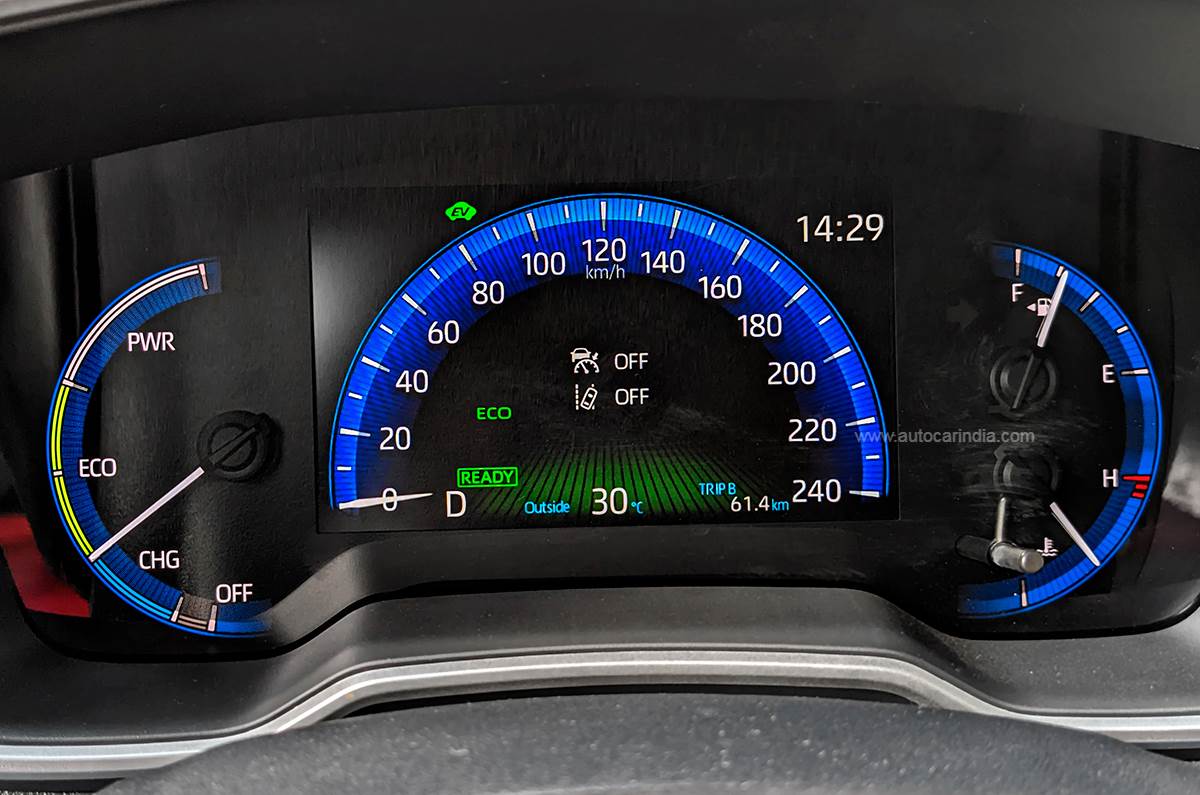 Similar to the Hyryder hybrid, the Corolla flex-fuel does not get a traditional RPM gauge.

The inside is a more straightforward affair devoid of any design flair and comes across as built to be functional and comfortable, which it is. The multifunction steering wheel buttons are easy to use, as are the buttons and dials on the dashboard. While we didn’t sit inside for very long, the seats were nice and comfy, and well-bolstered too. Space was good, both in the front and rear, and after spending some time with the car, I could only wonder how it would do today in our market.

What is a flex-fuel vehicle and will flex-fuel be sold in India?

Simply put, any internal combustion vehicle capable of running on a variable blend of fuels is called a flex-fuel vehicle. In this case, the Corolla can run on petrol and ethanol in any mix or even pure ethanol; typically, in Brazil, the blend is 85 percent ethanol (E85). In India, petrol currently supplied is mixed with 10 percent ethanol, which has no effect on an engine. 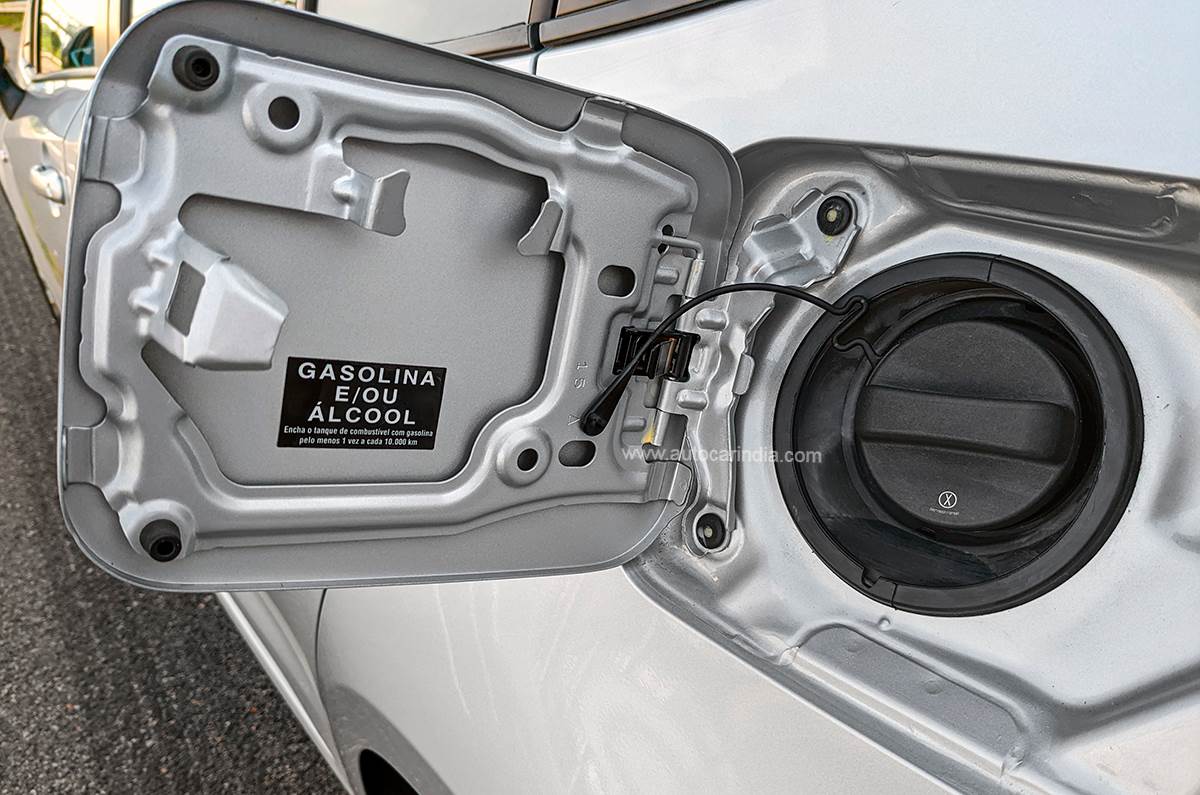 The Corolla flex fuel can run on any mix of ethanol or petrol or purely on either of the two fuels.

However, the Indian Government plans to increase the blend to 20 percent by next year, and this will require material changes to bits like the fuel hoses to handle the corrosive nature of ethanol, as well as tuning and calibration to meet the emission norms and manage the lower energy density of the fuel. 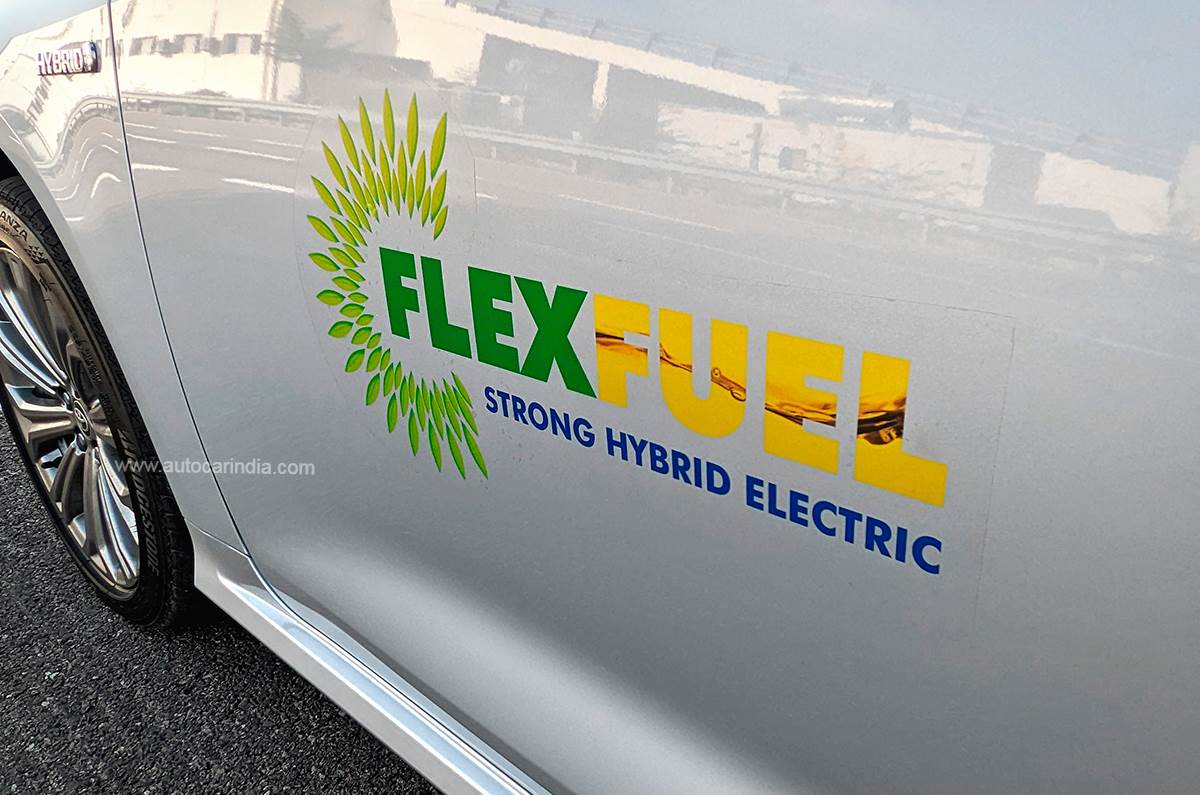 Thus, when E20 fuel does arrive, all cars will have to be tweaked to manage it. However, there are no plans for now to launch a fully flex-fuel-capable vehicle in India. Toyota says, given that the technology is ready, if E85 or pure ethanol can be supplied across India, a truly flex-fuel vehicle could easily arrive here.

What do you think about flex-fuel vehicles, should they launch in India? Let us know in the comments below.

As of now, India does not need a flex-fuel vehicle that support 85% ethanol or 100% ethanol in the fuel content. Buying such a vehicle is not the need of the hour. The need of the hour is a flex-fuel vehicle that can support upto 20-25% ethanol in the fuel content without any issues. Buying a car that support 85% ethanol for a policy that will take at least 8-10 years to come into force just does not sense for the Price-sensitive Indian car buyer.

As of now, India does not need a flex-fuel vehicle that support 85% ethanol or 100% ethanol in the fuel content. Buying such a vehicle is not the need of the hour. The need of the hour is a flex-fuel vehicle that can support upto 20-25% ethanol in the fuel content without any issues. Buying a car that support 85% ethanol for a policy that will take at least 8-10 years to come into force just does not sense for the Price-sensitive Indian car buyer.