Do you spend most of your time on the back seat? If so, the MG Hector Plus could be the car for you. 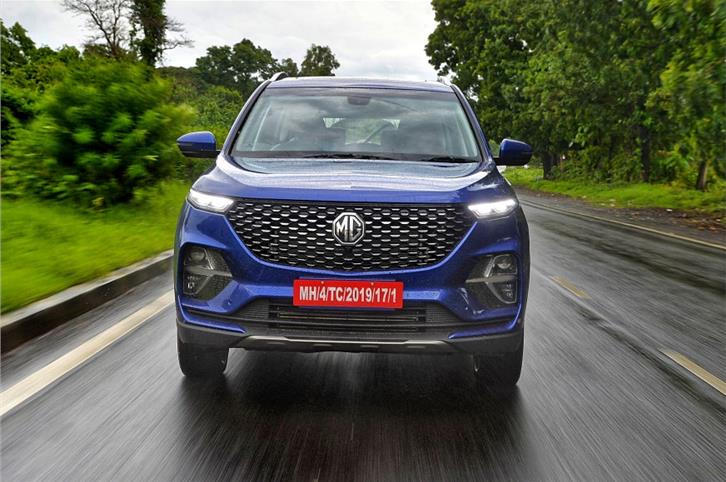 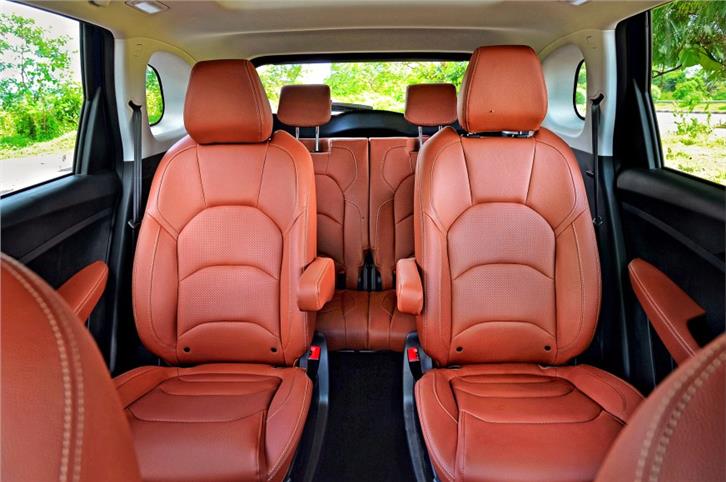 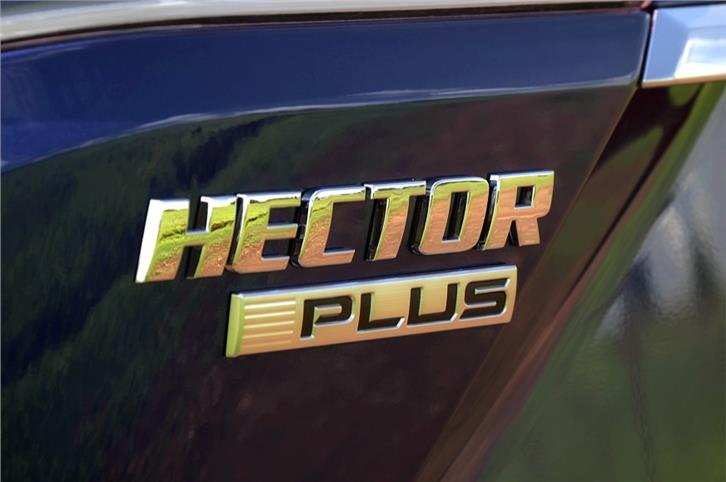 In a nutshell, the MG Hector Plus is the new three-row, six-seat derivative of the Hector we’re all familiar with. The standard Hector’s rear bench seat makes way for a pair of captain’s chairs on the Hector Plus, while further back a duo of seats has been added to form the new third row. On paper, then, the Hector Plus is both, a more luxurious and a more practical Hector.

First things first, the Hector Plus is not a stretched Hector. The Hector Plus is just as wide and tall as the standard model and shares the 2,750mm wheelbase as well. The Plus is all of 65mm longer, overall, but the increased length comes merely from the re-profiled bumpers. 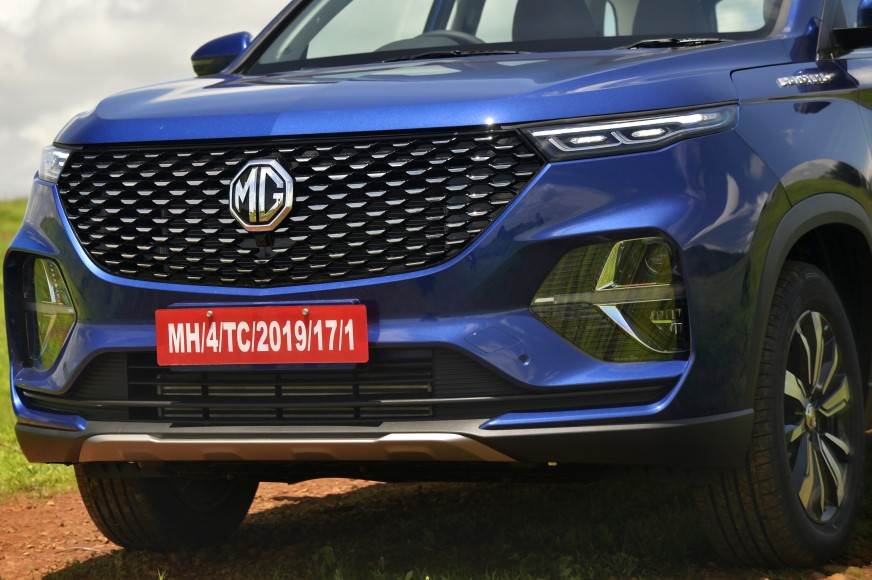 Hector Plus identifiable by its frameless grille and redone front bumper.

So how do you tell a Hector Plus apart from a standard Hector? The basic size, shape and profile is the same but there are a fair few differences on the outside. For one, the Hector Plus wears a subtler look. The flash value has been dialled down, and up front, chrome has only been used (to good effect) to embellish the grille. The frameless treatment makes the grille appear a touch larger and if you look really closely, you’ll notice a differentiating kink on the upper LED DRLs. The main LED headlamp cluster lower down has also been redone and the bumper is neater in look too.

Around the back, the reflector strip connecting the tail-lights on the Hector has been done away with for the Plus, and the bumper has been tidied up too. The mock exhaust openings look unnecessary, but the bigger spoilers are the 17-inch wheels that, as on the Hector, look a size or two too small for such a large SUV. The new Starry Blue colour is rather nice though.

The Hector Plus is intended for the chauffeur-driven owner so it’s only apt to start from the middle row. Finished in premium-looking tan leatherette upholstery and sporting contrast stitching, the sculpted captain’s chairs sure make for a very inviting sight. And the seats deliver on the comfort promise for the most part. The cushioning is really well judged, the fore-aft movement and backrest recline features provide a whole range of motion, and the adjustable armrests are comfy too. Then there’s the Hector’s trump card – space. There’s massive legroom at the seat’s rearmost setting and you won’t feel cramped should you need to slide the seat a bit forward to free up room for a third-row passenger. However, as a ‘large framed’ individual, I’d have liked a wider seat. Also, the somewhat low-set position of the seat means your thighs don’t get the best support. But by class standards, this is possibly the most comfortable back seat around. The petrol-hybrid variant has a quirk of its own. The lithium-ion battery’s position under the front passenger seat limits foot room for the all-important rear left occupant. 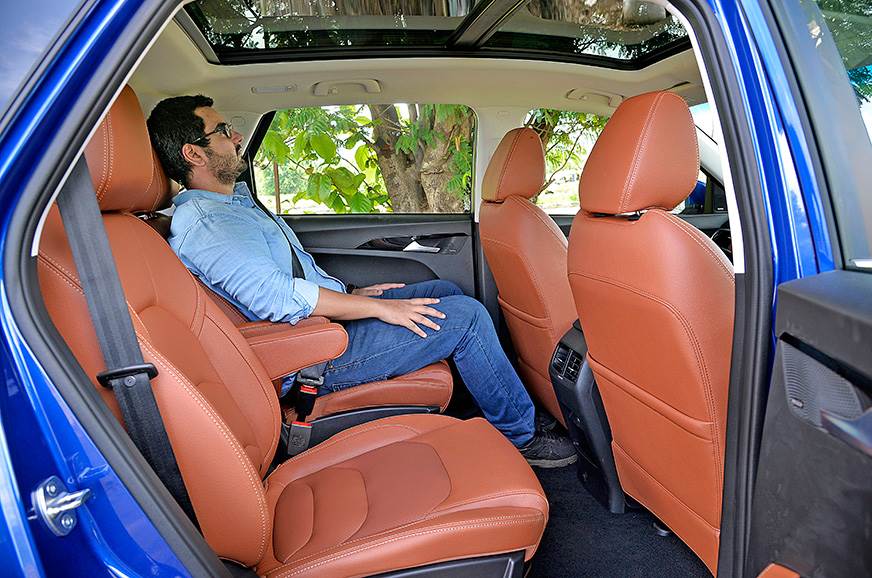 Captain chairs are very comfy and there's loads of room to stretch out.

MG officials have categorically said the Hector Plus’s third row is not meant for adults. It really isn’t. Access via the narrow passage between the middle row seats is cumbersome and space at the very back is limited. Children might be fine on room, but the knees-up seating and upright backrest is unlikely to win praise from any size of occupant. MG has provided dedicated vents and blower control for the third row and they do help the experience. 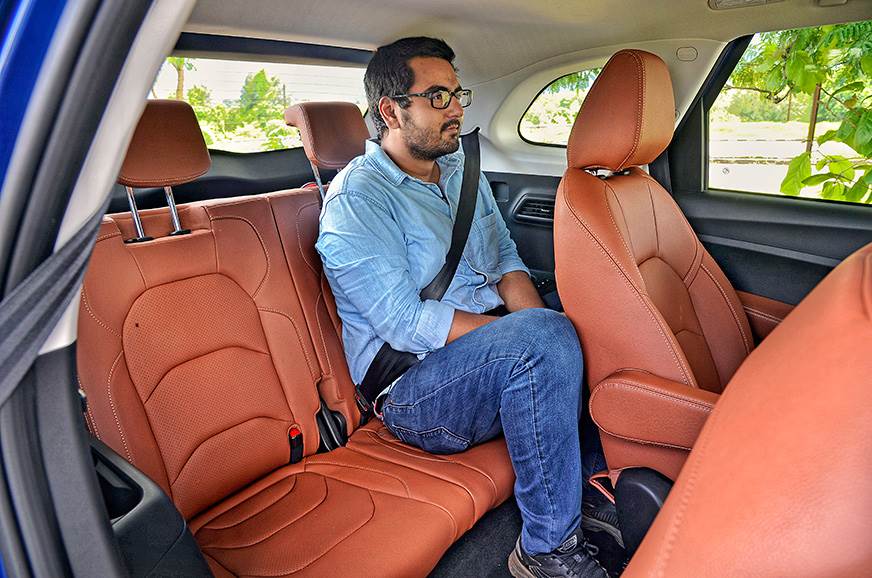 The third row is best for occasional use only.

As you’d have guessed the incorporation of a third row of seats have had a bearing on luggage capacity. Unique to the Hector Plus is a hands-free tailgate – swiping under the bumper activates the system. The tailgate opens to reveal a fairly limited 155 litres of space, with all seats up. However, the rear seats do split and fold flat when not needed, to free up a very useable 530 litres. Just for reference, the 5-seat Hector has a 587 litre luggage capacity. 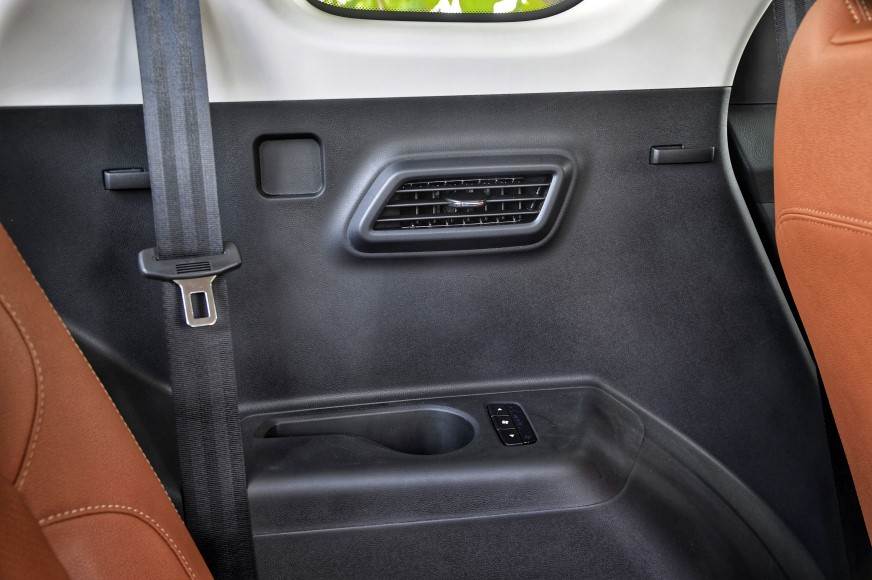 Those who’ve driven the standard Hector will find themselves in a familiar setting behind the wheel of the Hector Plus. That’s because the two models are near-identical up front and only distinguishable by their interior colour themes. Where the Hector’s cabin sports an all-black look, the Plus uses a posher tan-on-black theme. The cabin has its premium elements and touches, but a close look does reveal a fair few hard plastics too. Drivers will love the excellent visibility afforded by the large glasshouse and low dashboard, though the reflective cover for the speed and tacho dials makes for uneasy viewing. 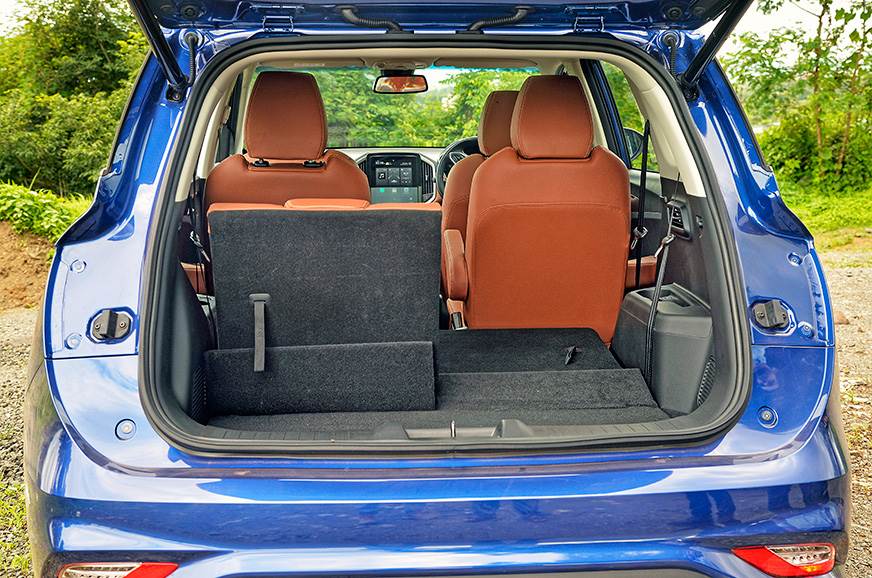 Third row can be split and folded to enhance luggage room.

As on the Hector, the talking point, and quite literally so, on the Hector Plus is the 10.4-inch touchscreen system that takes pride of place on the dashboard. The system runs a lot smoother than it did on the first of the Hectors from last year, and over-the-air updates ensure that it’s largely future-proof too. The Hector Plus debuts a new ‘chit-chat’ feature that includes pre-recorded responses to questions like “How am I looking today?”! Gimmicky? Yes. But in our strange times of social distancing, I guess any form of communication is welcome. But the system does get tripped on certain voice commands. Also, while it packs in loads of connected features (over 55, if you’re counting), a few physical buttons for commonly used functions would have been nice. 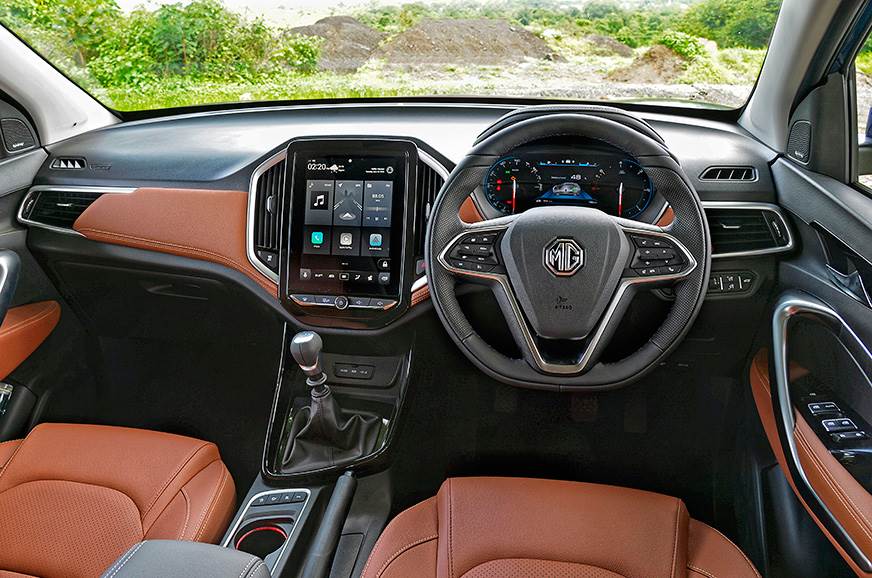 Elsewhere, in addition to the touchscreen system, hands-free tail gate and leatherette upholstery that we have already touched upon, the Hector Plus, in top-spec Sharp trim, also feature a panoramic sunroof, six-way power-adjustable driver’s seat, eight-colour ambient lighting, an Infinity audio system and a very handy 360-degree parking camera. 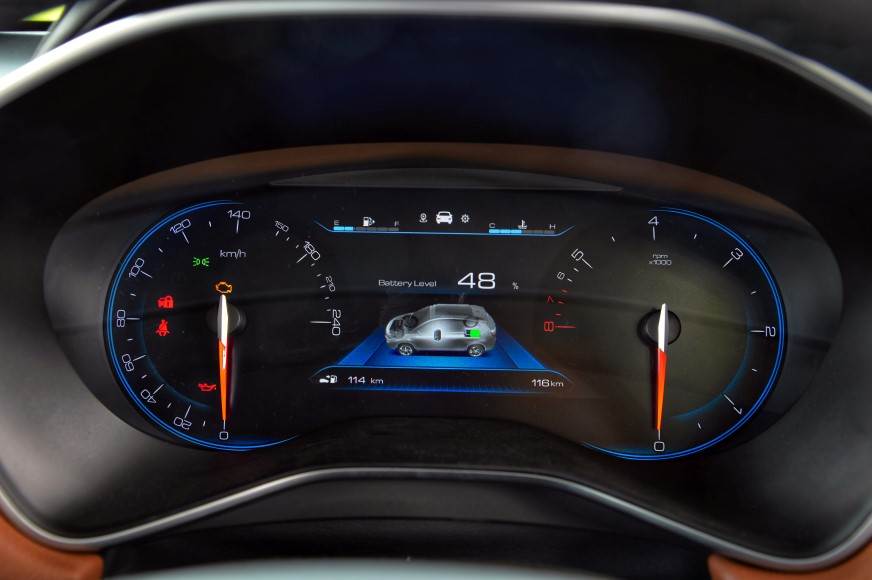 A 1.5 turbo-petrol engine might seem insufficient for an SUV as heavy (it weighs upwards of 1,700kg) as the Hector Plus but it gets the job done. The engine isn’t outright punchy, quick revving or enthusiastic, but typical Hector Plus drivers will have reason to like it. The build of power is linear, there’s enough go when you want and what stands out is a good level of refinement, which adds to the sense of wellbeing. 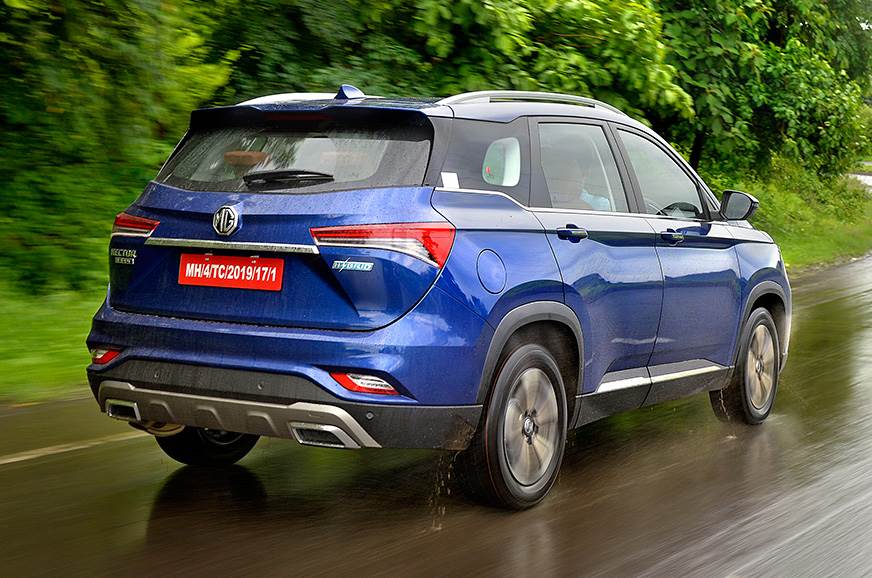 The Hector Plus is not for the keen driver but is easy to drive.

A light enough clutch and easy gearshifts help, while the mild-hybrid system also does its work unobtrusively. What’s performance like with a full load and what’s real-world efficiency like is something we’ll only know when we have more time with the Hector Plus hybrid. However, if you expect to drive around with a full house often, the torquier diesel might suit your needs better.

For what is a large SUV, the Hector Plus is surprisingly easy to drive. The light steering, relatively tight turning circle and the added help from the 360-degree camera make it easy to place in tight confines. The cushy low-speed ride only furthers the Hector Plus’ case as a friendly urban SUV. It’s on the open road and at higher speeds that the Hector Plus doesn’t feel as well rounded. There is an up and down movement that creeps into the experience and only gets amplified the faster you go. A high centre of gravity and loose steering also mean this is not a model you’d want to drive with verve on a twisty road.

MG Hector Plus prices start at Rs 13.49 lakh and top off at Rs 18.54 lakh (ex-showroom, India). That means, variant to variant, the Hector Plus is pricier by just Rs 40,000- 65,000 than the standard Hector. This relatively marginal price increase over the 5-seat version makes the Hector Plus exceptional value for money, but do note that its prices go up by Rs 50,000 post August 13. 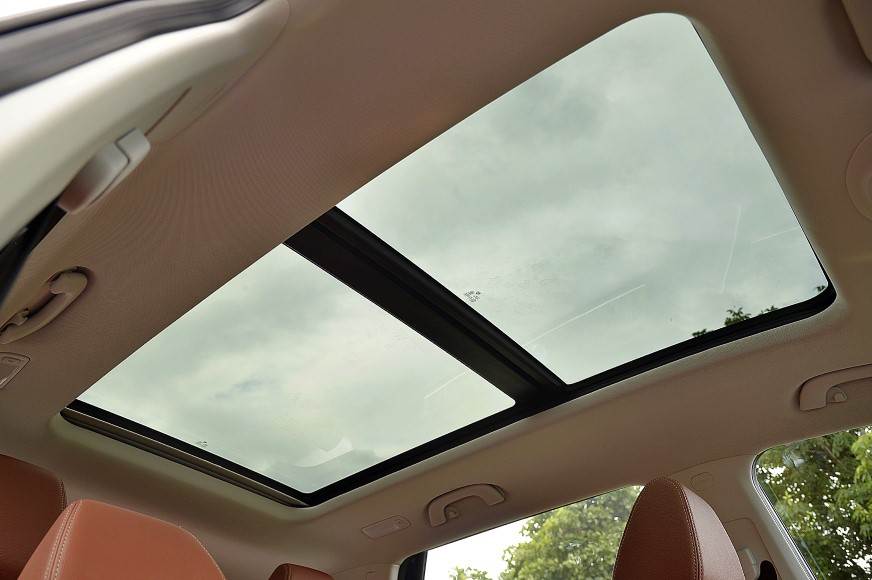 Massive sunroof is a defining feature on the Hector Plus.

For the added outlay over a standard Hector, you get a more premium middle-row experience and the added flexibility of a third row of seats. All this over and above what we already like about the standard Hector. It doesn’t pretend to be an enthusiast’s SUV, but as a comfy SUV for the family, the Hector Plus works rather well.

Add in MG’s service and ownership packages, and you’ll find your money buys you a whole lot of SUV.