A replacement for the 488 GTB, the F8 promises 488 Pista levels of performance. We head to Ferrari’s headquarters in Maranello to see for ourselves. 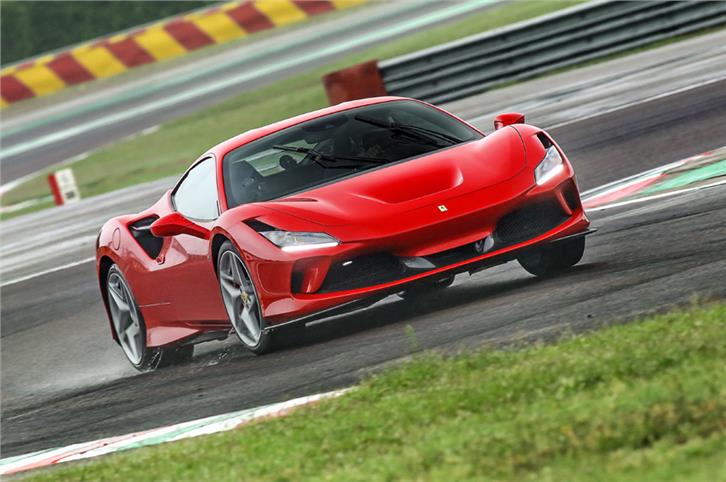 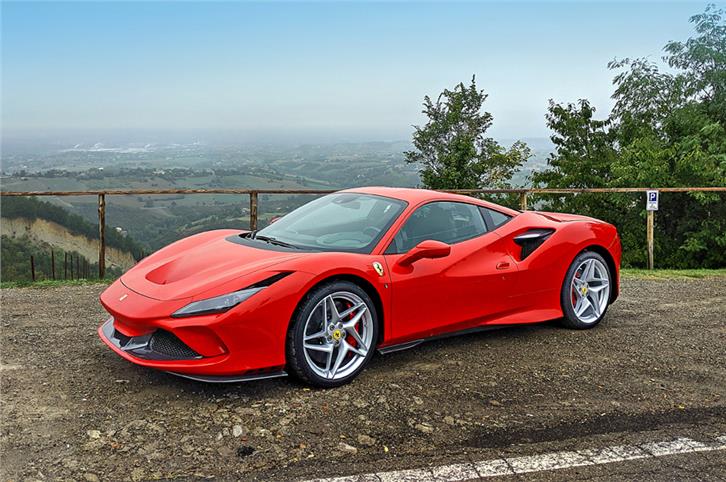 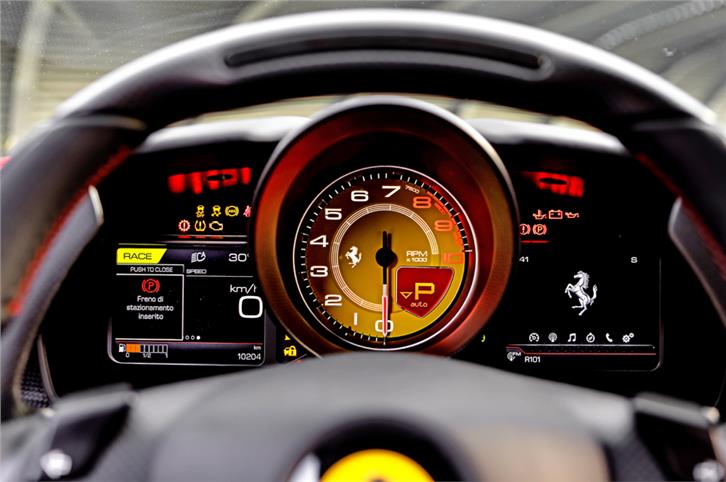 As the name suggests, it’s a tribute. But to whom and why? Ferrari won’t say why, but they’ve made it quite clear to whom. With 720hp, the F8 engine is the most powerful V8 in a regular road-going Ferrari and the car pays homage to this engine. Besides that, this V8 is also one of Maranello’s finest, having won ‘Best Engine’ in the International Engine of the Year awards in 2016, 2017 and 2018. In 2018, it was also awarded the best engine of the last two decades. 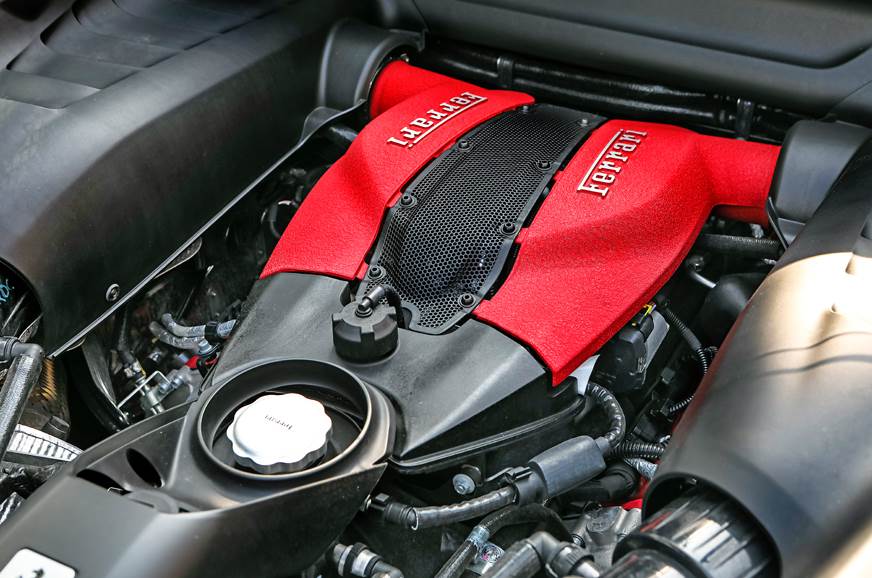 So that settles the ‘who’, and as for the ‘why’, we’ll hazard a guess. With the changing times, this is perhaps the last V8 that will remain a pure IC engine; Maranello’s next V8 (in the SF90) is a proper plug-in hybrid.

In the line-up, the F8 replaces the 488 GTB and it’s a massive evolution of the same. The engine puts out an extra 50hp, it is 40kg lighter, there’s a 10 percent improvement in aero efficiency, and a further improvement to the Side Slip Control (SSC) system. To make this happen, the 488 GTB has been thoroughly reworked, roof to wheels, and Ferrari says the only bits carried over is the cabin area, like the doors, roof, etc.

Driving a Ferrari is always special, but making it even more so was the fact that we had a few laps on the company’s famed Fiorano test track, followed by a drive in the hills of Maranello; truly special indeed. Sadly, the weather gods weren’t in the mood for piped Italian exhaust notes and quite literally rained on our parade. And it wasn’t light or heavy enough to wash away the grime of the track, leaving us with a cold wet track with grease and rubber marbles all over. 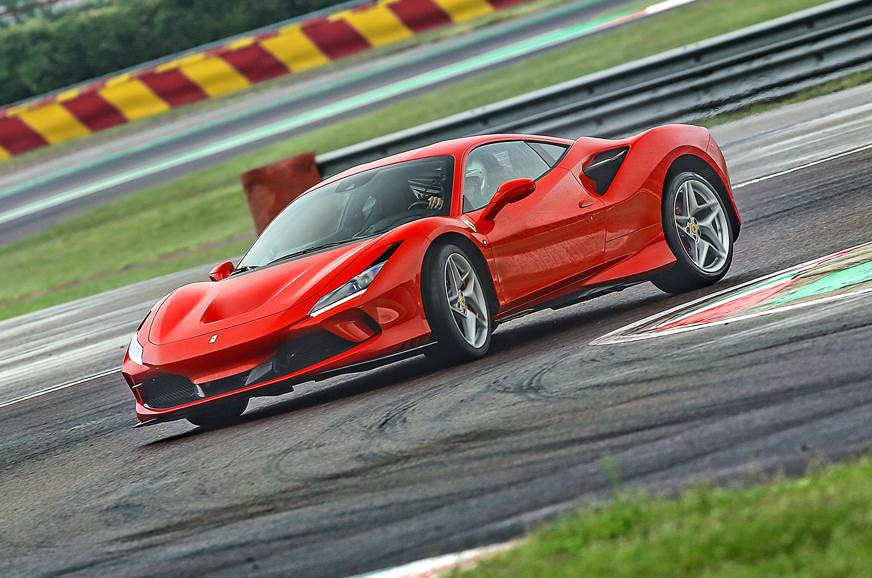 There is a lot of electronics onboard to keep things sane and yet fun. The Side Slip Control (SSC) system, now upped to version 6.1, has the Ferrari Dynamic Enhancer (FDE+) which can be activated in the manettino’s Race position as well. Ferrari says, compared to the GTB, the new SSC system gives the driver more confidence in getting the tail out by allowing the same degree of oversteer, but with at least 30 percent lesser steering wheel activity. Unfortunately, given the conditions we weren’t going to try anything silly. This isn’t magic auto pilot after all; do something stupid and the 720 horses going through two wheels will let you know quite clearly. And so the test driver’s ‘suggestion’ to keep the car in Wet mode only was hardly surprising.

So while the conditions were not encouraging for the F8’s 720hp, they helped the front end really shine. The steering is quick and nimble and the front feels well tied down to the track. Even in the hills – where I was able to push harder – guiding the car through the tight bends wasn’t a challenge at all; its precision really impresses. Turn the wheel, point it where you want it to go, and it will, and with such eagerness and agility that you’ll want to repeat bends just for the sheer thrill of it. I know I did, I backtracked just to do a twisty bit again. 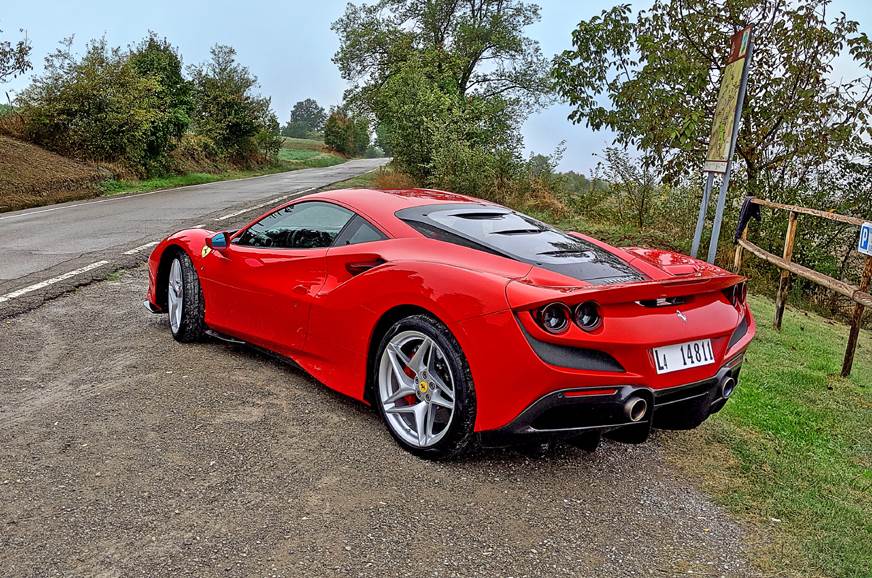 Another impressive aspect is the ride. The hills in Maranello aren’t very well surfaced. No moon crater-like surfaces like we have here, but the road isn’t levelled and has plenty of broken surfaces. Two hours in a supercar a few years ago would have been a bone-jarring and tiring experience, but today, company’s like Ferrari and Porsche are really doing impressive stuff with suspension systems and the F8 is right up there with the best of them. It gets a bumpy road setting where the dampers soften the imperfections quite nicely, but even in regular mode, it’s no bone-shaker; this is simply stunning when you think of the cornering this car can manage. Entering the hills, I thought I’d have to back off a fair bit but the springs can really let the horses play. 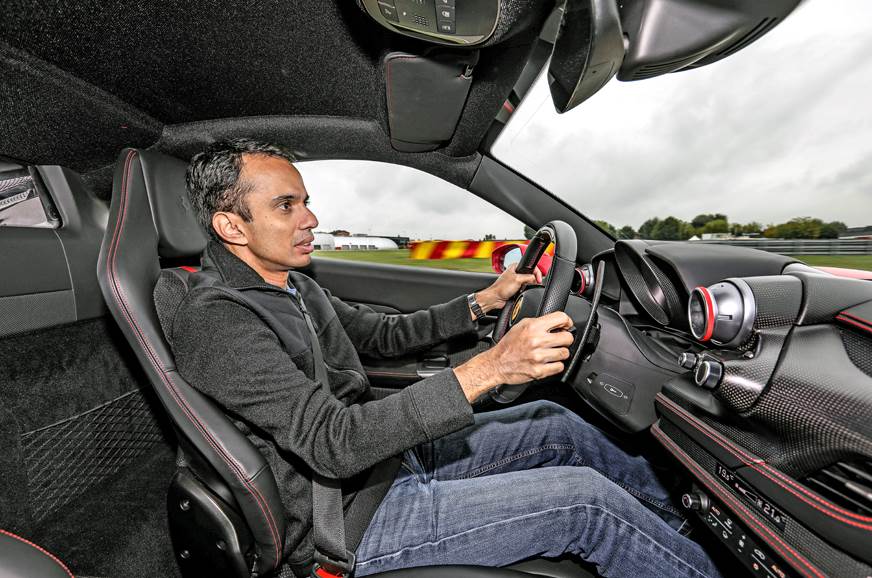 And play they did. On the track, we were limited to mostly Wet mode. There were a few scary moments when I slipped it into Sport (I just had too), where the tail would twitch a lot under throttle inputs. But out here, things were a little better and it’s where I was gobsmacked by the engine’s response. Yes, this is a blown engine and I would like to say there is a hint of turbo lag, but there simply isn’t. Response is immediate; put your foot down and wham you’re off. In Wet mode, naturally, throttle response isn’t very sharp, but, otherwise, it’s simply lightning quick. Ferrari claims a 0-100kph time of 2.9sec, which is basically hypercar-quick – quicker than the Enzo was and it feels like it too; there’s a sense of urgency to the powertrain and, of course, physics will pin you back in your seat, letting you know just how fast you’re going.

The V8 puts out 720hp at 7,000rpm (50hp more than the 488 GTB), and max torque peaks at 770Nm, a small 10Nm increase over the GTB. These numbers incidentally are identical to the engine in the Pista on which it is based. The F8’s engine thus also carries its lightweight components like the titanium connecting rods and the crankshaft and flywheel, and there’s also the inconel exhaust system. Speaking of which, the F8 is the first Ferrari to use a Gasoline Particulate Filter (GPF), and yes, it meets our BS6 norms. 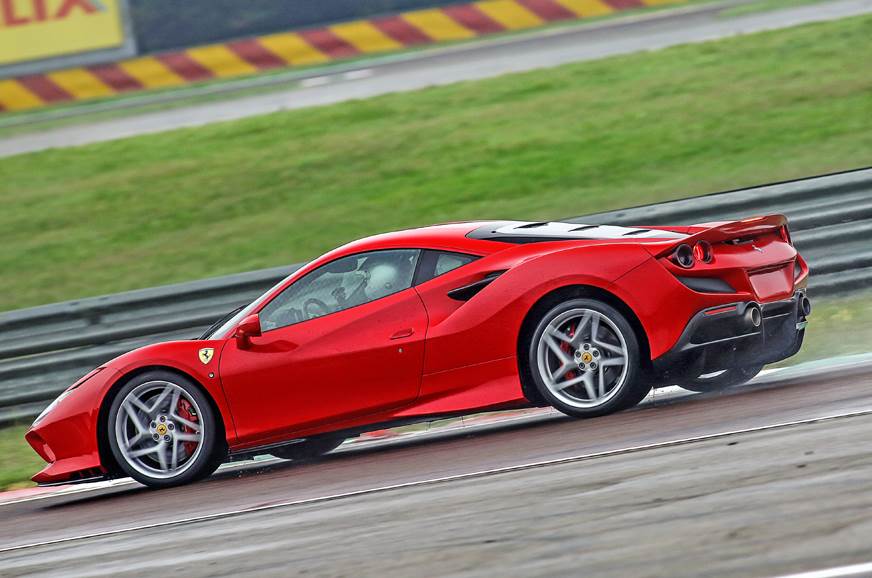 And that brings me to what is perhaps the only downside of the car – the soundtrack. Don’t get me wrong, it’s not like the F8 doesn’t sound good – that would be like saying Bon Jovi isn’t great because you’re thinking Freddie Mercury. The F8 is a rockstar in its own right, but it’s just that you miss the unrestricted boom of the 458. The turbos and the GPF do strangle things but Ferrari has tried to make amends. Thankfully, it isn’t an artificial sound played through the speakers but they have used what’s called ‘hot tube resonator’ – a big, hollow pipe affixed to the exhaust pipe to help amplify sound; so not artificial, but a naturally augmented sound. Does it work? Yes, it is louder than the GTB but the tube also amplifies the turbo whistle which at full clip gets really quite loud; it’s eerily very sci-fi like – a roar and a really loud whistle.

Apart from that, winding it up to 7,000rpm will also have you smack straight into what Ferrari call the ‘wall effect’ limiter, and yes, it’s just like hitting a brick wall. The revs climb so quickly and fast that the limiter catches you by surprise. The first time it happened I thought I broke something, but it’s a massive amount of fun, just like the rest of the car.

It does the Fiorano lap in 1min 22.5sec – which is half a second faster than the GTB and a second slower than the Pista, and that kind of summarizes the F8 experience. It sits between the GTB and the Pista and offers you the everyday civility of the former with some of the wild child experience of the latter.

I wasn’t particularly enamored by the 488’s styling, and plenty has been said of Ferraris in-house design efforts not being up to the lofty standards set by Pininfarina, a lot of which is due to the sacrifices made to aerodynamics. With the Tributo, however, they have really turned a corner. There’s plenty of aero detailing but it now manages to please the gods of wind and vanity. 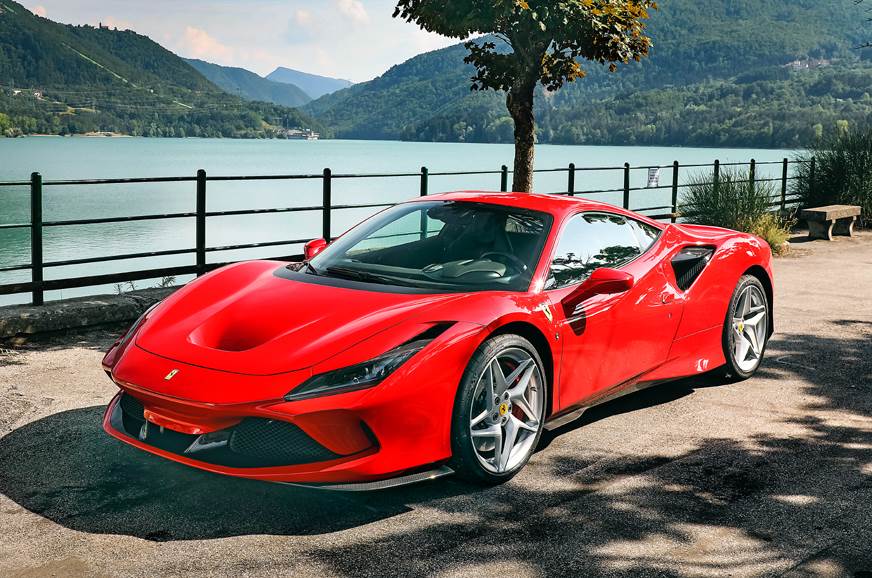 The nose looks super-slick with its tucked-in lower section, and the S-Duct (more on this later) on the bonnet look neat and not just purposeful like on the 488 Pista. Even the side air intakes look less obtrusive on the F8. The rear isn’t very cohesive but it’s got some stunning details like a return to the twin circular lamps and a clear slotted Lexan polycarbonate rear window, inspired or paying tribute to another mighty V8-engine Ferrari, the F40. On the whole, to my eyes, the F8 manages to look menacing and pretty at the same time. 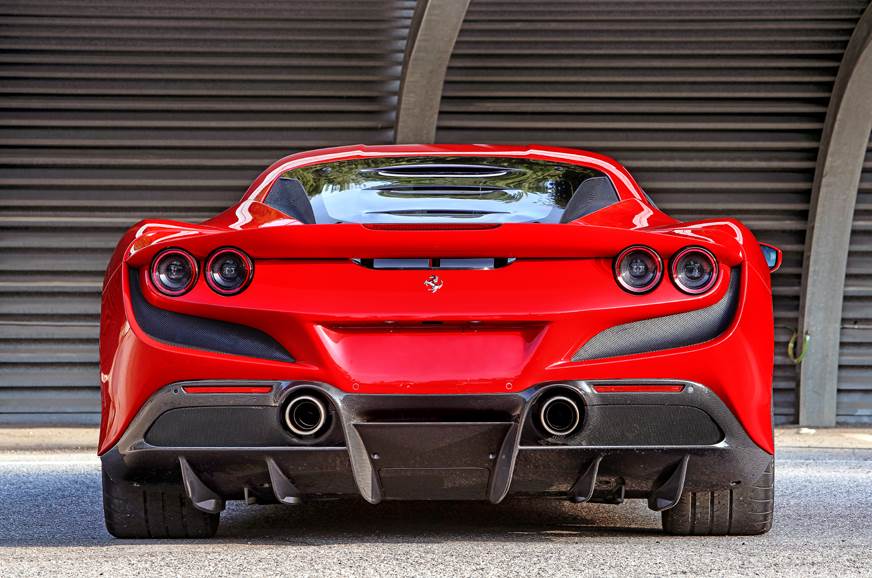 But onto less subjective matters now. Just like the Pista, the F8 has the S-Duct on the bonnet. It’s a lot smaller but essentially functions in the same way; it takes the high-pressure air coming in at the bumper and deflects it through a vent upwards and over the bonnet thus generating downforce over the front axle. The headlights are smaller LED units that allow for additional brake cooling air intakes above them. Also, like in the 488 Challenge and Pista, the engine air intakes have been moved from the flanks to the rear spoiler. And so, thanks to the now shorter air intake length and the high air pressure generated by the rear spoiler, losses are reduced thereby increasing engine performance. The underbody too has seen massive aero tweaks and Ferrari says up to 20 percent of the increased aero efficiency comes from the rear diffuser alone which has three active flaps that can maximise downforce or also move to completely stall the diffuser and reduce the car’s drag on straights.

Settle into the low-slung seat and it’s pretty similar to the GTB. The central tacho is flanked by two screens and the steering wheel is the now familiar unit with all controls mounted on it rather than on the stalks behind. While Ferrari says every element of the dash has been redesigned, it’s the air vents that are easily the most distinguishable, looking like the exhaust end of a jet engine. The passenger side also now has a narrow 7.0-inch touchscreen that can keep your companion busy with all sorts of info on what you’re up to or even throw up navigation data, in case you prefer a human calling out turns. Of course, you have to remember the screen, like a lot of the other bits, is a cheque book-burning option. In terms of storage, there’s space behind the seats with a cargo net on the bulkhead too. And speaking of space, with the S-Duct not as big or sharply cut like in the Pista, boot space in the F8 larger by 30 litres at 200 litres. 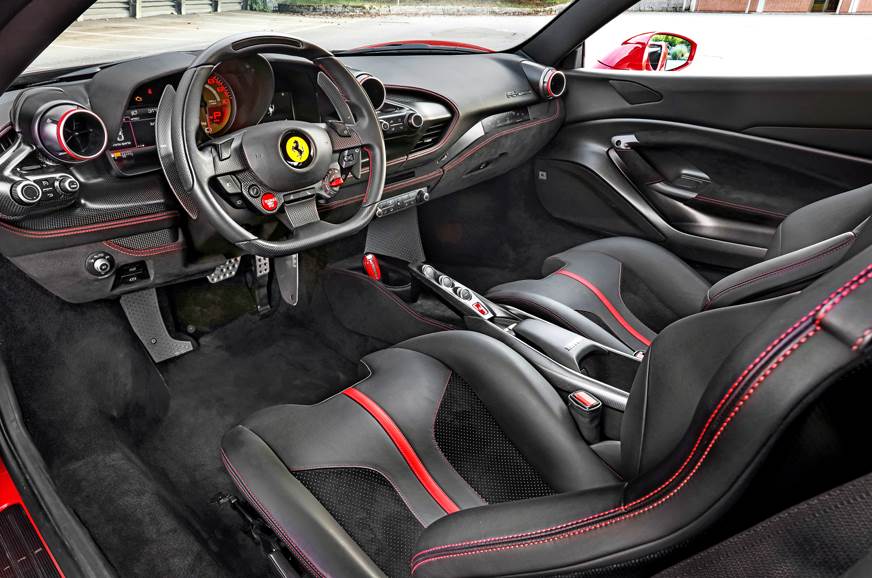 It’s beautiful to look at, thrilling to drive and sounds pretty decent too, and that quite simply is all you’d ever ask from a Ferrari. And like other Ferraris before, the F8 betters its predecessor in terms of performance and this time aesthetics too. It won’t be cheap, starting at Rs 4.02 crore (ex-showroom, India), but it it’s a mid-engine V8 Ferrari. Starting from the 308 GTB in 1975, Ferrari has had a long and illustrious line-up of mid-engine V8 two-seater Berlinettas, and the F8 will certainly go down as one of the better ones. Then there’s also the possibility that this could be your last chance to own a pure IC engine V8 Ferrari, and for that reason alone, you should get one.