First impressions say that the Alturas holds a lot of promise. 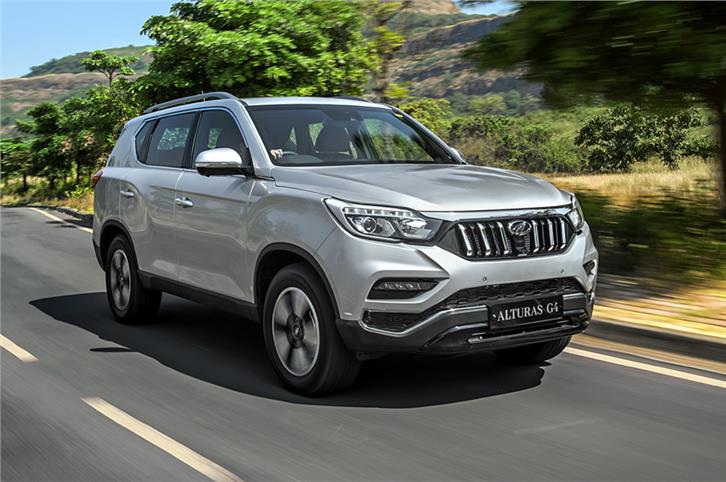 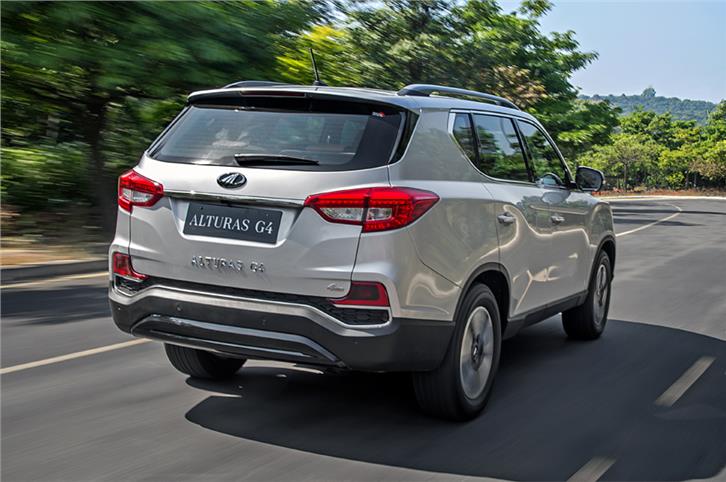 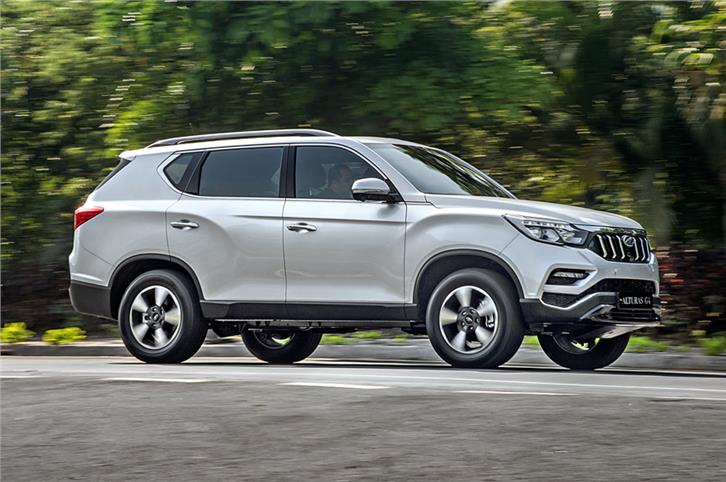 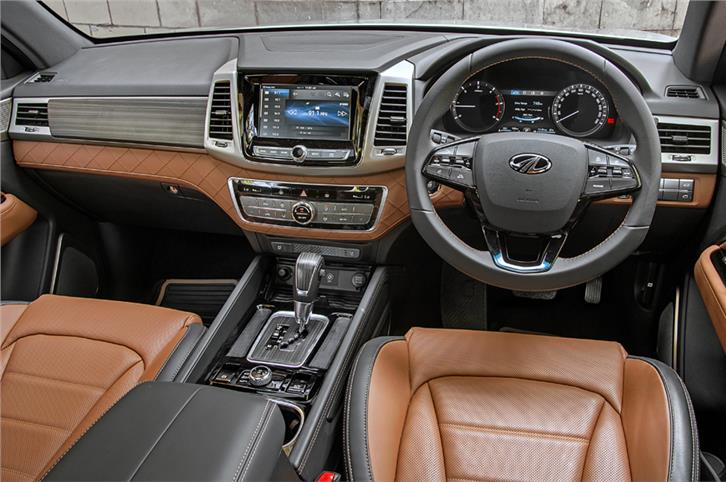 The Alturas G4 is Mahindra’s latest flagship SUV. Basically a second-generation SsangYong Rexton, the SUV that will now be sold as a Mahindra, was first displayed earlier this year at the Auto Expo. A direct rival to old-school SUVs like the Toyota Fortuner and Ford Endeavour, the Alturas uses a tough ladder-frame chassis for greater strength and rigidity, gets seven seats, and, like its rivals, gets four-wheel drive and low range.

Unlike the earlier SUV sold in India, the new Rexton, however, isn’t based on the Mercedes M-class architecture. Mahindra says the chassis is all new, and the Alturas is also powered by Ssangyong’s own 178hp, 2.2-litre common rail diesel engine. What has been carried over from Mercedes is a version of the 7-Gtronic torque converter-based automatic gearbox. 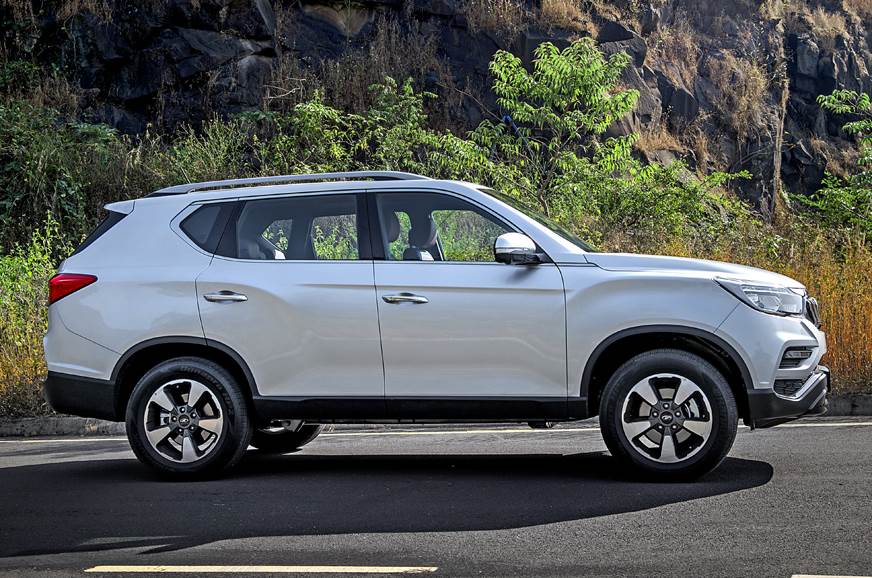 Also several times more appealing is the design. The bluff nose is extremely wide, the bonnet is tall and this gives the SUV all the visual bulk it needs. The HID headlamps with integrated LED DRLs are well executed, the minimalist Mahindra grille looks neat sitting high up, and since the ‘X’ themed chin has been kept relatively clutter-free, the lower bumper and ‘scuff plate’ work well too.

In profile, the Alturas looks neat and tidy too. In fact, the extra emphasis given to the haunches works nicely as well; it’s just that the big rear overhang and the tiny rear ‘quarter glass’ make the body look a bit too elongated. And then there are the 18-inch alloy wheels that look too small for the bulk above. The rear, however, is neatly done. 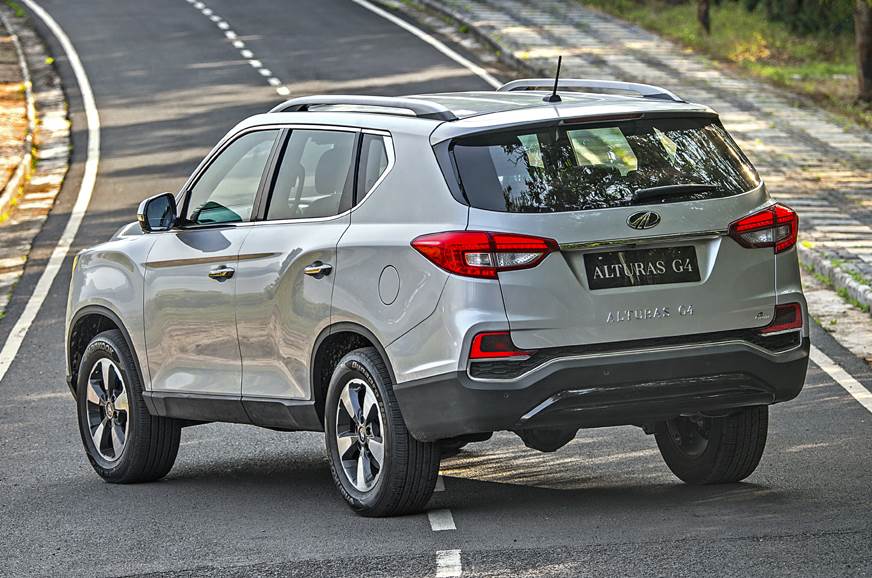 Bulk is important in the body-on-frame SUV segment, and the Alturas does well here too, even when compared to rivals. It has the longest wheelbase, it is the tallest SUV in its class and, at 1,900mm, it is the widest too.

A lot has gone into making the cabin of the Alturas G4 feel more premium than the Rextons sold in other markets, and this means, in places, it is superior to many rivals in its class. A Merc S-class-like easy ingress feature is one such. Open the driver’s door and the seat slides back, to make getting in easy. And once you shut the door, the car seat automatically aligns to the previously set position. Neat. Then there’s the positive first impression created by the neat, clean and high-quality dash. Bright and airy, the dashboard neatly blends faux wood, brushed aluminum and real leather in a manner that’s conventional but still easy on the eyes. And what works particularly well is that the leather-covered bit of the dash runs clean through the centre console, like on the previous-generation Merc S-class. And the quilted finish of the leather gives it even more of a premium feel. 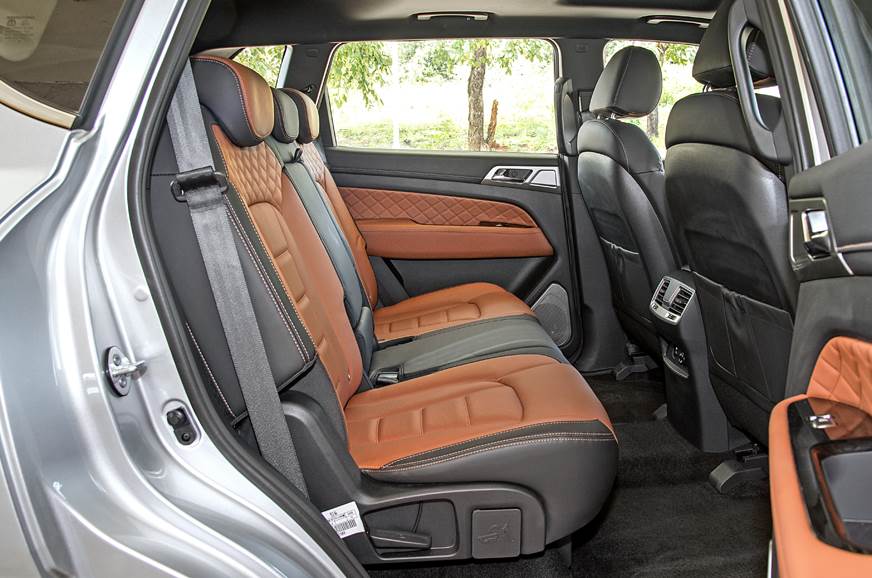 While most bits on the dash are soft to touch and the buttons and switches are very nicely built, there are some hard plastics present on the vents, control stalks and the steering wheel.

However, the good news here is that the Alturas is well equipped. There's a big 8.0-inch touchscreen in the middle, with Android Auto and Apple CarPlay connectivity, and it also doubles as the display for the 360-degree camera while parking. What’s more is that you also get a 7.0-inch info screen in the instrument cluster between the dials. The display is crisp and you can even check the tyre pressures and also choose the different themes for the display. While the Alturas is well equipped, it does miss out on some features that the Ford Endeavour offers like the semi-auto park assist, terrain management system (for the 4WD) and middle row seats that slide back and forth (also available on the Toyota Fortuner). 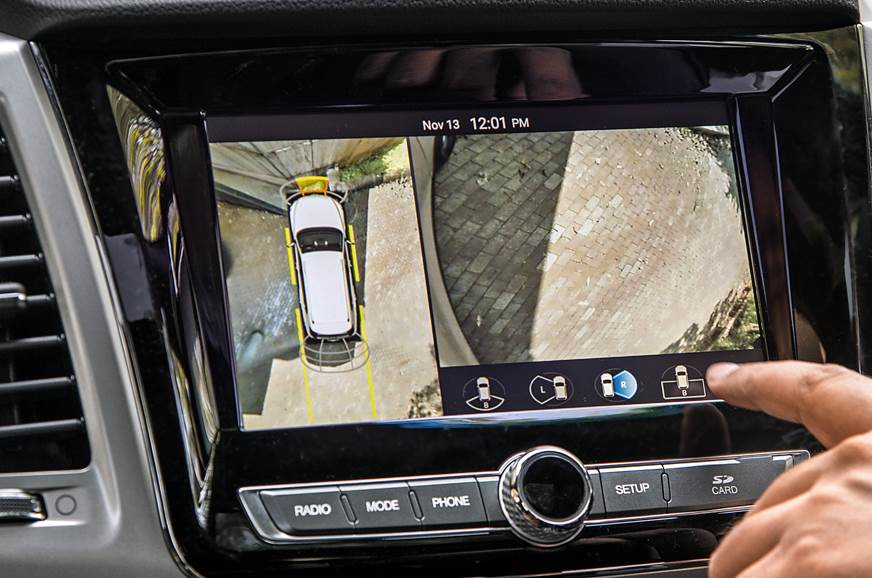 Mahindra claims the seats are finished in Nappa leather. The front seats get ventilation, the driver's seat gets a memory function, there’s good back and underthigh support, and the side bolstering helps you keep in place when on turns. You get 8-way power adjustment for the driver's seat and manual tilt and telescopic adjustment for the steering wheel; so finding a comfortable driving position is easy. Adding to the comfort of the cabin is the automatic two-zone climate control.

Getting into the middle row, however, is a slightly difficult task. The high ground clearance of 244mm in unladen conditions makes stepping inside rather difficult, and, unlike the competition, there’s no running board. Once inside, there’s plenty of space here and the bench can fit three passengers with ease. There’s adequate underthigh support, you can recline the backrest and the legroom is plenty even for 6ft tall passengers. 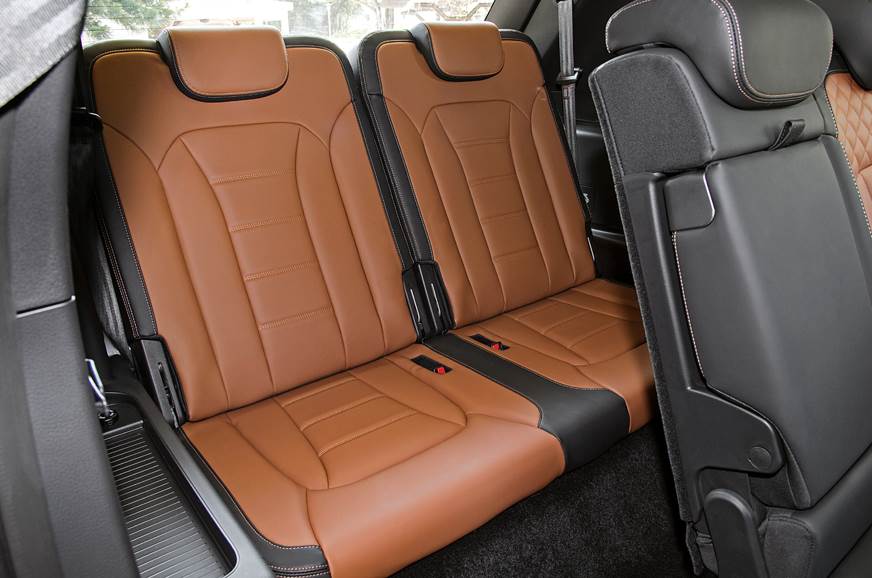 Six-footers in the back, however, will be just about okay when it comes to headroom; this is because there's a dip in the roof for the sunroof's sliding rails. Getting comfy on the third row is almost impossible for adults. Like most third-row seats, you are sat very low, and since the fixed window is tiny, you feel extremely claustrophobic.

Powering the Alturas G4 is a new 2.2-litre engine that makes over 178 hp at 4,000 rpm and 420Nm at 1,600-2,600 rpm. The D22DTR engine is BS-IV compliant and is mated to a Mercedes-Benz -sourced 7-speed torque converter automatic gearbox. While the power is primarily transferred to the rear wheels, the Alturas also comes with a shift-on-fly four-wheel-drive system. You can engage the four-wheel-drive Low and High by just turning the round chrome knob located behind the gear lever.

Start up the engine and you will be impressed by the level of refinement on the Alturas. The cabin feels isolated and very little engine noise is heard on the inside. The typical diesel clatter at low revs is also well masked; it’s only when you get to higher revs that the engine becomes audible. At low speeds, the Alturas moves effortlessly and feels quite responsive to every tap on the accelerator. There is only a hint of lag – in part due to the variable geometry turbocharger – so driving this big SUV at city speeds is a breeze. And the engine has a decent mid-range and there is enough power on tap to allow the SUV to accelerate smartly. Still those expecting a nice surge of torque in the mid-range are likely to be mildly disappointed. And this holds true for the 7-speed automatic as well. Gearshifts are seamless and you move through the gears with ease, but when you want to execute a quick downshift or even an upshift, the gearbox seems to want to take its own sweet time. Also, though you can select gears manually, it seems hardly worth the effort; using the fiddly ‘switch’ on the gear selector isn’t nice. 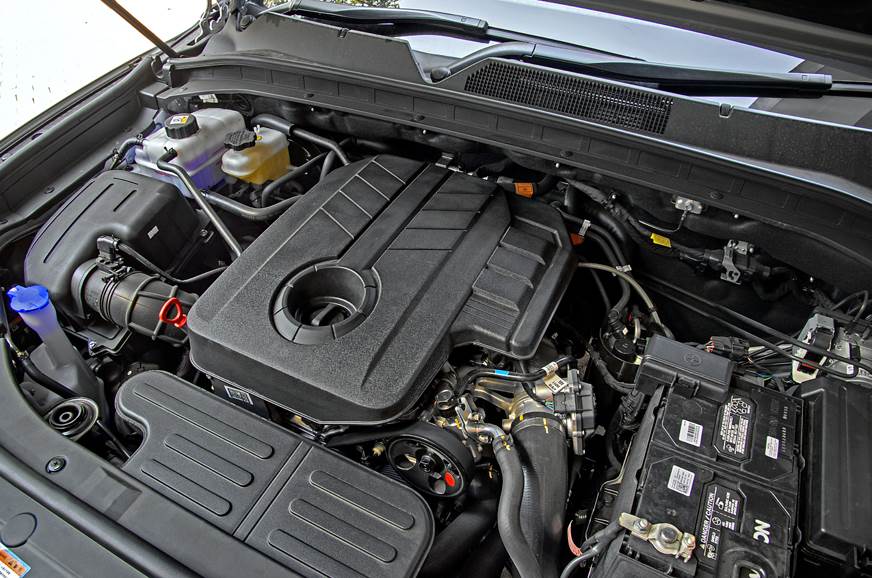 Mahindra has set up the suspension to suit Indian conditions and the SUV boasts a high ground clearance. While we didn’t get a chance to take the Alturas off-road, we did encounter some rough patches and the suspension performed quite well. Small potholes are dismissed with ease and the suspension is silent in operation. And what’s better still is that the Alturas also doesn’t feel as lumpy as other body-on-frame SUVs over bumps. Yes, there is some amount of shimmy, especially over big potholes, but it feels composed for the most part. The light steering is also nice for city driving.

It even feels reasonably composed at speed. Yes, there is a fair amount of body roll, but it still feels comfortable tackling corners. The roll is nicely contained, the front and rear of the car work nicely together and, as long as you don’t try and drive it like a Ford Figo, it is even mildly entertaining to drive. If only there were some feel and feedback from the steering wheel. Even the brakes have a progressive feel and do their job well under hard braking.

If you are in the market for a big, traditional SUV with good space, comfy interiors and decent driving characteristics, the Alturas has a lot to offer. It is attractive, it is light and easy to drive, and it’s even well equipped. It even gets some of the segment-first features like the nine airbags, seat memory for driver, ventilated front seats, electronic parking brake and 360-degree camera. 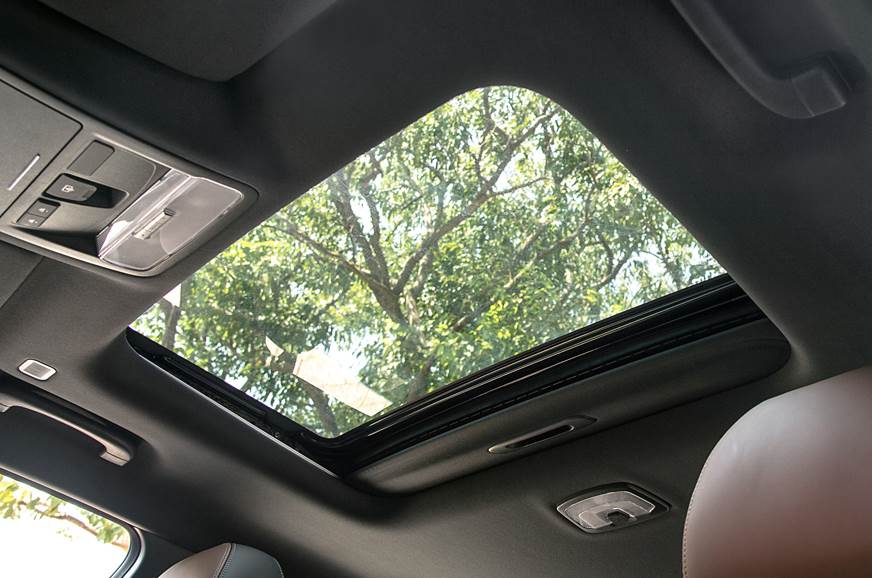 The Alturas isn't as nice to drive as the Ford Endeavour, and it doesn’t have the Toyota Fortuner’s tank-like build, and it doesn’t lead when it comes to street cred either. And then there’s the fact that Indian car buyers didn’t take too well to the earlier Rexton. Still, seeing as Mahindra has priced the Alturas quite well (starting at Rs 26.95 lakh and going up to Rs 29.95 lakh), it does have what it takes to give the competition a good fight. Make no mistake, this new Alturas (Rexton) is a big step up on the earlier car.