How does the upcoming Mahindra Alturas G4 stack up against rivals like the Ford Endeavour, Toyota Fortuner and Isuzu MU-X, on paper? Find out here. 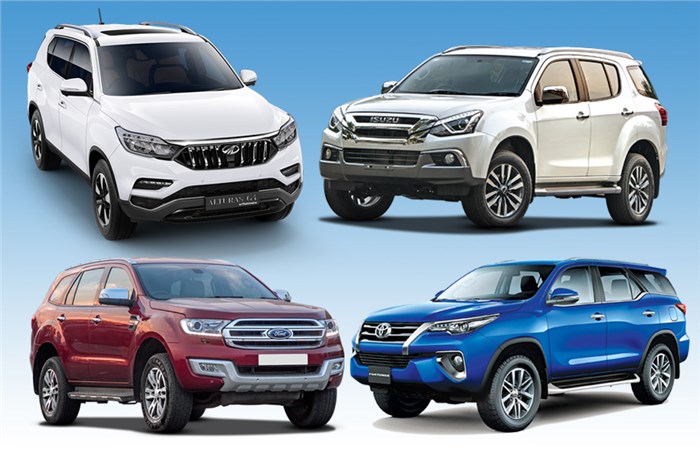 Mahindra is set to launch the Alturas G4 SUV in India on November 24. It will replace the outgoing SsangYong Rexton and take over the mantle of the carmaker’s flagship model. Though the SUV promises to be a compelling offering, it is up against some serious players in its segment; the Toyota Fortuner remains the segment best-seller, the Ford Endeavour comes with a pair of strong engines and a lengthy equipment list, and the Isuzu MU-X was recently updated, making it a more rounded package than before. We compare the top-spec four-wheel-drive variants with an automatic gearbox on paper to find out which one of these SUVs comes out on top.

In true SUV fashion, all models here are big in size. Surprisingly, it’s the Toyota Fortuner that has the smallest dimensions of the lot. The Mahindra Alturas, meanwhile, has the longest wheelbase, at 2,865mm, and is the widest, at 1,960mm, which should give it a commanding road presence. At almost 4.90m, the Ford Endeavour is the longest contender here and has the second-longest wheelbase at 2,850mm. The Isuzu MU-X is the tallest of the lot and, at 230mm, boasts of the highest ground clearance in this comparison.

As it has the largest displacement and the most number of cylinders, it comes as no surprise that the five-cylinder diesel-equipped Ford Endeavour produces the most power and torque of the lot. There is just one gearbox option on the Endeavour – a 6-speed automatic.  The Ford is also offered with a smaller 2.2-litre diesel motor, which comes with two-wheel-drive only. The Mahindra Alturas’ engine has the smallest cubic capacity but still puts out respectable figures of 178hp and 420Nm of torque in this comparison. It comes mated to a Mercedes-sourced 7-speed auto ‘box. The Toyota Fortuner is the only SUV here that has the option of a manual transmission with four-wheel drive. However, the manual variant puts out 30Nm less torque than its automatic counterpart. Toyota’s 2.8-litre diesel produces 177hp in the Fortuner, while a 2.7-litre petrol motor is also on offer.  The Isuzu’s 3.0-litre mill puts out the same power (177hp) as the Fortuner but lesser torque, at 380Nm. It is also mated to a 5-speed automatic gearbox that feels a tad bit outdated in this company.

In terms of equipment, all the SUVs get a generous amount of goodies. Features common to all include projector headlamps with LED DRLs, leather upholstery, a powered driver’s seat, hill-hold and start assist, ABS with EBD and multiple airbags. However, there’s a key difference in the infotainment area. The upcoming Alturas G4 will boast of a huge 9.2-inch HD touchscreen, with Apple CarPlay and Android Auto compatibility. Both the Japanese SUVs come with 7.0-inch touchscreens, and the Fortuner’s comes with navigation. The Endeavour gets an 8.0-inch unit and is compatible with Apple CarPlay and Android Auto. A sunroof will be offered on the Alturas while the Endeavour gets a panoramic one. The Toyota and the Isuzu miss out on a sunroof altogether. The Mahindra Alturas G4 will also be equipped with a segment-first electronic parking brake and gets features its rivals do not posses such as a 360-degree camera, ventialted front seats and a memory function for the power adjustable front seats.

The Toyota Fortuner is at the expensive end of the spectrum. It get loads of features, a strong engine and is properly usable off-road. The Fortuner range starts lower, at Rs 26.33 lakh, but the fully-loaded top-spec 3.2-litre engine with 4x4 costs a hefty Rs 32.97 lakh. There is little to choose between the fully-loaded Fortuner and Endeavour that reflects in the Rs 16,000 price difference. The MU-X was updated recently to bring it on par with its competitors. Still, it falls short in a couple of areas, which may lead buyers to choose from the competition. However, the Isuzu MU-X is well priced and undercuts the Fortuner and Endeavour significantly. The Mahindra Alturas G4, meanwhile, has launched at Rs 26.95-29.95 lakh, which makes it a great value-for-money buy, considering the features it has on offer. With this price, Mahindra will undercut the Toyota and the Ford by a significant margin and eat into their market share too.

Alturas G4 to retail from Mahindra’s World of SUVs showrooms