Audi A3 convertible a bit too small for you? Open-top sportscars too far out of reach? The A5 Cabriolet may just be the right fit. 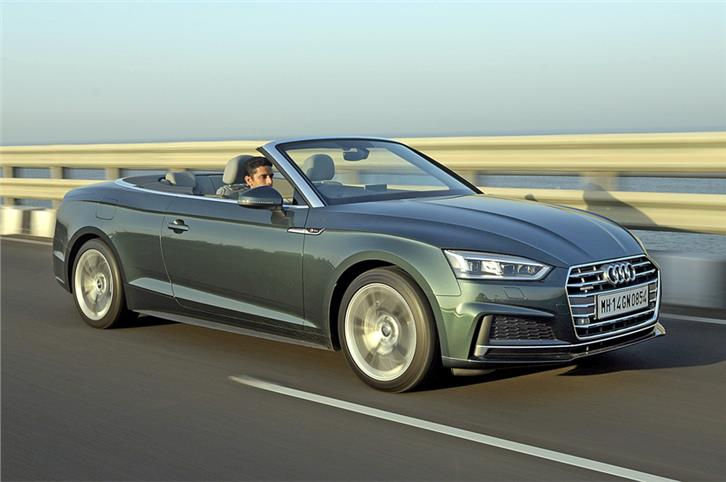 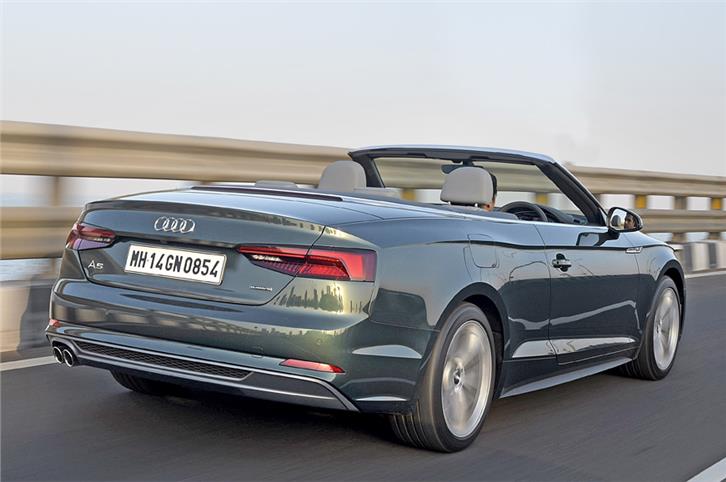 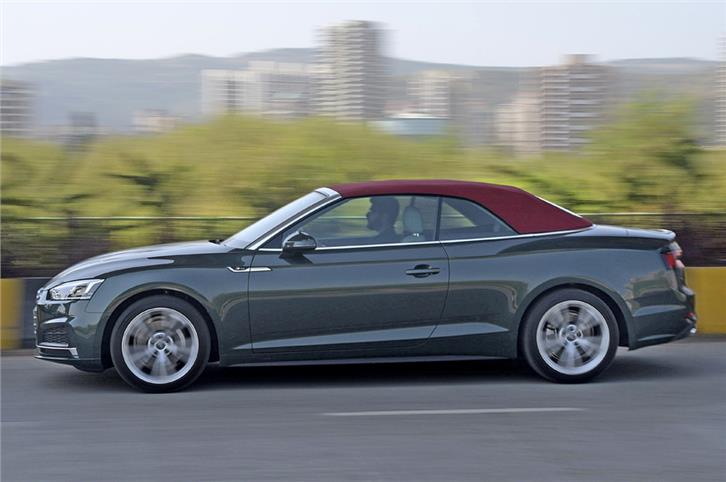 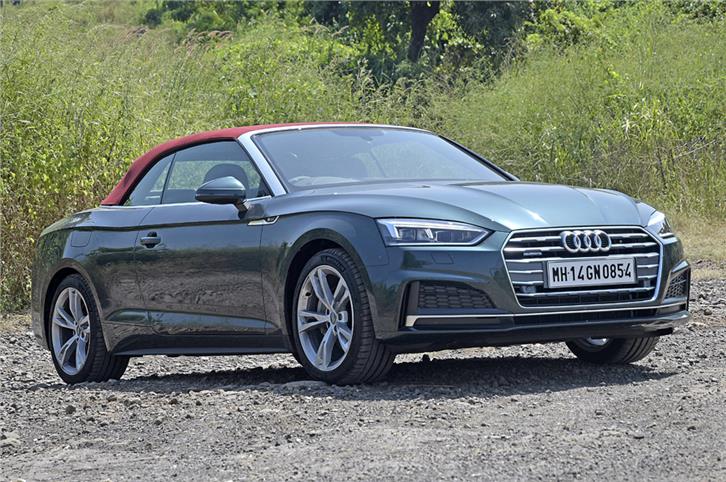 What is it?
The new Audi A5 arrived in India in three different flavours, and while we got to sample the Audi A5 and S5 Sportback in Rajasthan last month, and now we’ve sampled the third – the A5 Cabriolet. Yes, we first drove the A5 Cabriolet in Spain earlier this year, and interestingly, it’s come to India in the same mechanical spec. That means Quattro all-wheel drive and a 2.0-litre diesel engine, which sounds like an unusual choice for a Rs 68 lakh convertible, right? We’ll see how that pans out in the real world soon enough, but what about what’s on the surface?

The A5 – in any of its body styles – is one of the most beautiful-looking modern Audis. It follows the Audi design template, yes, and for that reason, it should look exactly the same as the similarly sized A4, but look a little closer and you’ll see that it just doesn’t. Small nuances in the design, like the curves over the wheel arches and the added creases in the bonnet, set it apart as an entirely different model. This one, of course, is the most different of them all, and especially in this Gotland Green paint shade with the brick red fabric roof, it strikes me as the prettiest of the three A5s you can buy in India, top up or down. 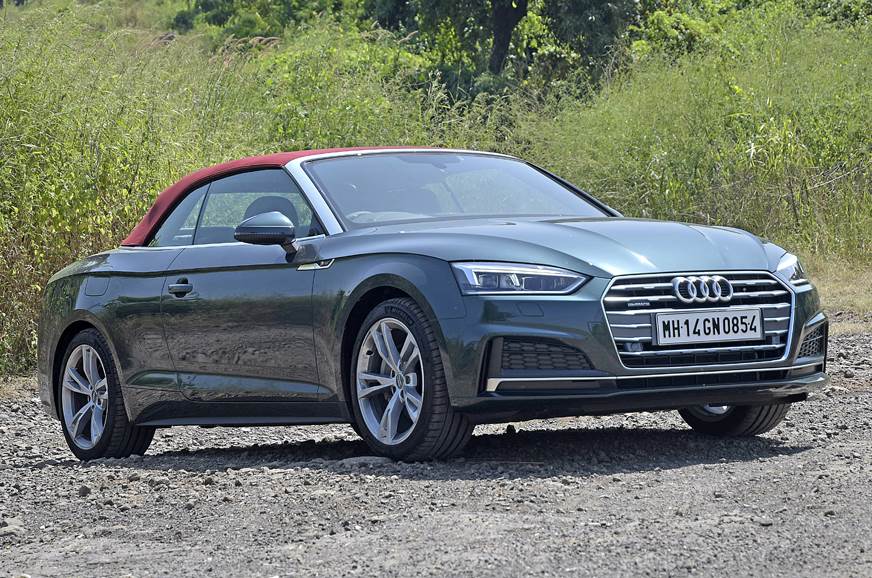 What’s it like on the inside?
What’s immediately apparent, compared to Audi’s other convertible, the A3 Cabriolet, is that this is one you can realistically use as a four-seater for adults. Yes, four six-footers probably wouldn’t enjoy long journeys in it, but you’d be surprised how much space can be made in the back bench with a little leeway from the front; headroom with the roof in place, however, is definitely compromised. What’s more, rear passengers get their own AC vents and temperature control. The best part is because there’s no roof and enough foot space, when it’s time to get out of the back seat, you can simply stand up and walk out. The 380-litre boot is surprisingly commodious, and there’s even a little lever-operated drop-down ‘tray’ that reveals how much space you’ll lose once you’ve lowered the roof and eaten up another 60 litres. It’s no station wagon, but you could easily pack enough for a weekend trip for a 2+2 family.

The A5 Cabriolet is quite sumptuously trimmed, with high-quality leather, thick carpets and un-veneered wood. The grey upholstery might seem a bit dull, but it somehow just works on this car. However, some of the trim is part of the S-line package which is optional. In fact, many of the goodies on this car, like the Virtual Cockpit digital dials, LED headlamps, navigation, flat-bottom steering and the Bang & Olufsen sound system, are optional extras. Still, you do get cool standard features like Apple CarPlay and Android Auto, and microphones built into the front seatbelts so you can be heard even when the roof's down. 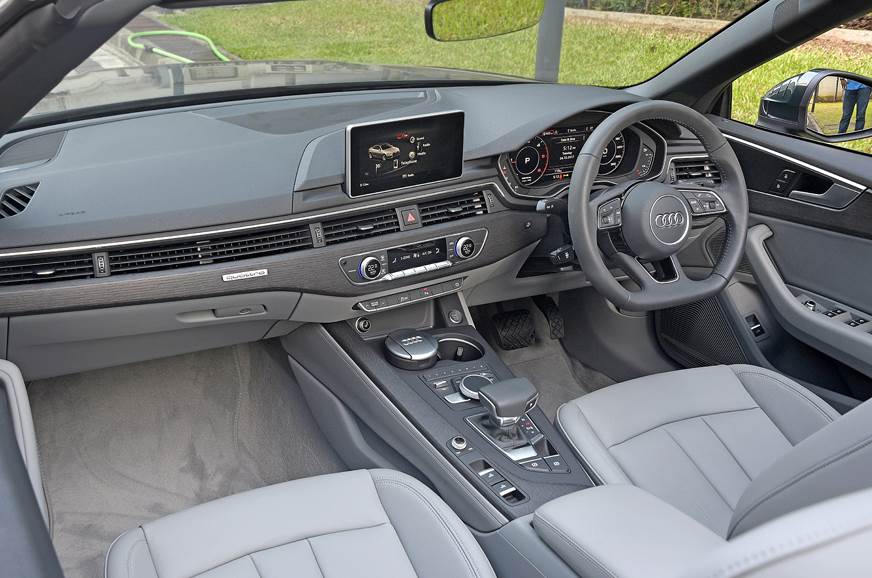 What’s it like to drive?
The elephant in the room is really the diesel engine. Sure it could maybe work on the more practical and conventional, five-door A5 Sportback, but on a convertible, really? We were quite disappointed to hear that the A3 Cabriolet facelift would be downsizing from a 1.8- to a 1.4-litre petrol engine, but this move, on the surface, seems arguably worse. This is, perhaps, for cost reasons, as the EA288 diesel engine is assembled in India, but you can’t help but wonder why they didn’t at least give the option of the excellent EA888 2.0-litre petrol engine you get in the Audi Q7 and the Audi TT.

Fire it up and you immediately realise what we mean, as you get a big rattle that settles down to a grumbly note. It drones on a bit as you move off, and only once you’ve gotten going does the noise disappear into a hush. Once you’re cruising, however, the refinement is really impressive. This is one of the quietest four-cylinder diesels around and you will forget about the fuel that propels it, once you’re absorbed into the driving experience. The soft-top roof does a commendable job of keeping outside noises outside – motor included – but this is a convertible, so you’re going to open the roof, right? By the way, that takes 18sec and can be done at speeds up to 50kph. 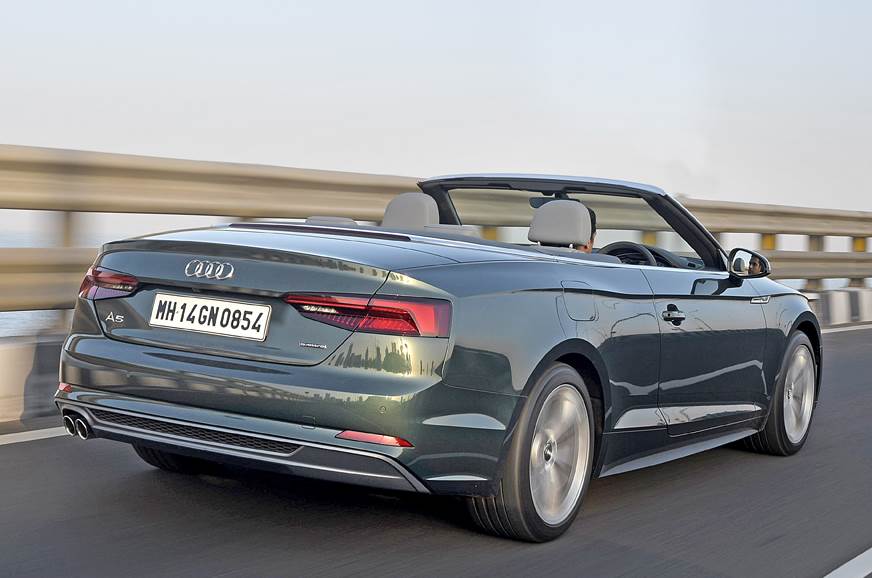 This is a relatively large, two-door car that weighs nearly 1.9 tonnes (there’s lots of extra structural bracing) and has no roof, so yes, there is a bit of flex in the chassis that you can feel going over bumps and speed breakers. But this won’t bother you that much because this is less of a sportscar and more of a cruiser, and that engine has a lot to do with it. It’s not an S5 that would urge you to push harder, and though there are drive modes to turn the wick up, they only work, and very mildly so, on the steering and powertrain. The suspension is unaffected.And that suspension is really well calibrated, and nowhere near as bouncy or floaty as the A4. In fact, this is the calibration they should have chosen for all the cars on this platform in India. It’s reasonably composed around corners too. But the real revelation is the steering, which though not quite at the same level as a BMW or Jaguar, is impressive for an Audi when it comes to heft and feedback.

As for the way the engine performs, it’s actually rather good. 400Nm is a good amount to shove this convertible around and when put to the road via a quick-shifting DSG gearbox and Quattro AWD, you get seamless and effortless performance. Sure, there’s the slight hiccup at low revs, but that’s the case with most powertrains of a similar configuration. The 190hp 2.0 TDI has enough gusto for this car, provided you don’t attempt drag racing someone between the traffic lights. 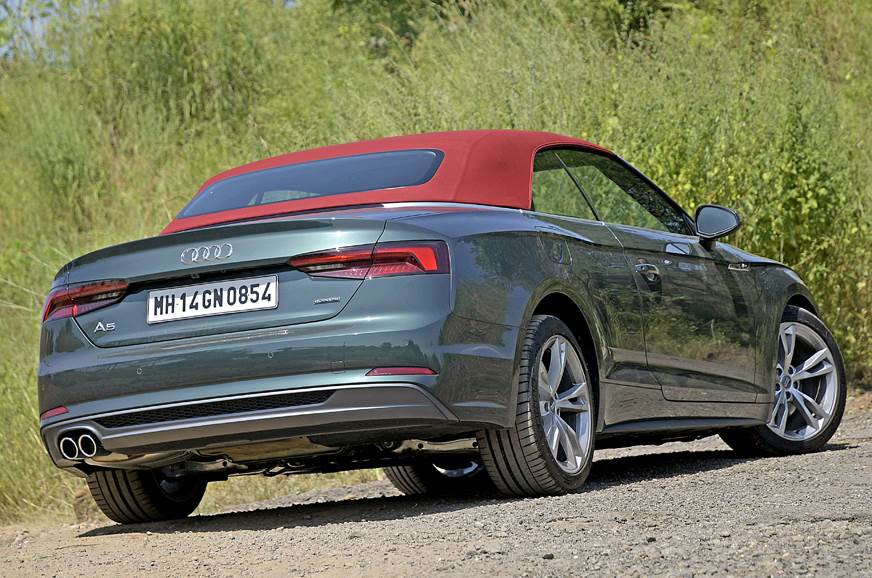 Should I buy one?
This car does actually have a direct rival in the form of the Mercedes-Benz C 300 Cabriolet, with the major difference, of course, being that it uses a petrol engine, not a diesel. How they compare will have to wait until we can bring them both together, but by itself, the Audi A5 Cabriolet ticks most of the right boxes. It’s got the feel-good factor in the form of a superbly appointed (if slightly plainly designed) interior, a beautiful exterior and a strong equipment list; let’s face it, owners will spec the car up too. It scores surprisingly well on the sensible stuff too, like space for four and their minimal luggage, and a comfortable ride. The point of contention is really the fact that it’s powered by a diesel engine, and while it’s quiet on the move and has more than enough performance, you can’t help but wonder how much better it would’ve been with a similarly sized petrol motor. It’s more psychological than anything else, however, and if you can look past this, the A5 Cabriolet TDI Quattro makes for a superb second (or third) car, which gets you wind-in-the-hair motoring without sacrificing too much else.