The latest version of Audi’s mid-size four door coupe is about more than hot looks. 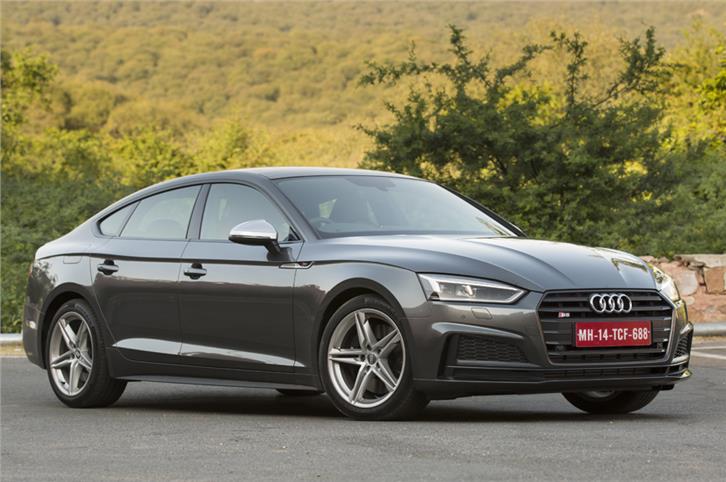 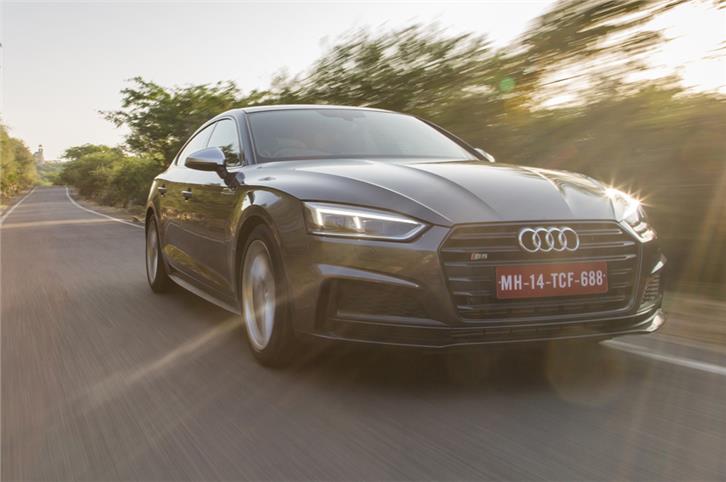 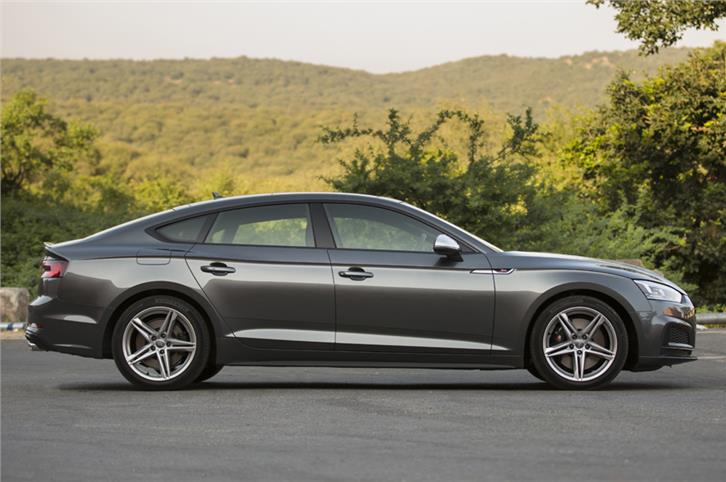 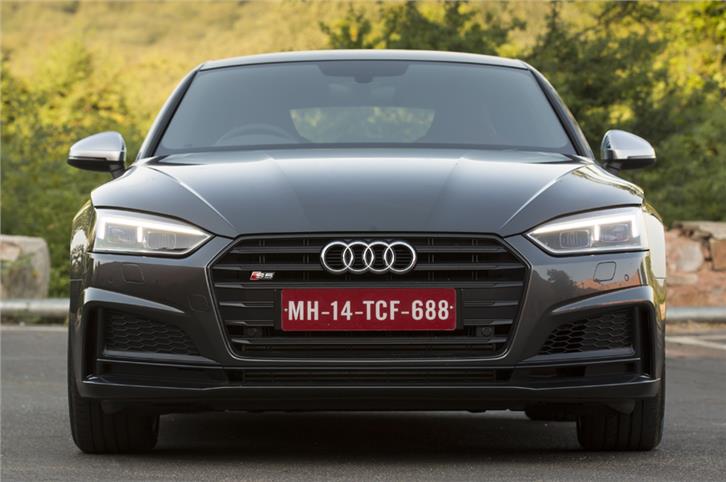 What is it?
If you like the Audi A4 but find it too generic and feel it doesn’t complement your individuality then the car you should be looking at is the new A5 Sportback. It’s the flamboyant sibling to the A4, and a car that will primarily lure you for the way it looks. Before you ask, “Wait, ‘new’ A5 Sportback? Didn’t Audi launch one just a year or two ago in India?” Yes, that’s correct, Audi launched the A5 Sportback (in hot S5 guise, no less) two years but when it came to India the previous gen model was in the autumn of its life. The new-gen A5 however comes to our market within a year of its international arrival so its absolutely box fresh.

Like the A4, the A5 is built on the VW Group’s MLB platform, so positions its engine longitudinally and powers the front wheels or all four wheels via Quattro all-wheel drive. India gets two versions of the A5 Sportback – the sporty 354hp, 3.0 V6 petrol engine-powered S5 and the more mainstream diesel - a 190hp 2.0 TDI.

S5 or TDI, the A5 Sportback is one head turner of a machine. It’s long, low and wide to just the right degree and though the whole look is very Audi, it’s not typical Audi. There are more curves and contours on the A5 than its more sharpy cut siblings from Ingolstadt, that give this car a ‘cooler’ vibe. Eye-catching details abound (check out the ridges on the headlights) but the A5 Sportback’s defining feature unquestionably is its sportback. The flow from the roof to the short deck…it’s just fabulous. Frameless doors elevate the sense of occasion to eleven while the rake of the rear windscreen and those fine cuts on the tail lights will also tell anyone behind you that they aren’t tailing a regular Audi sedan. The S5 with its quad exhausts makes that connect harder still.

Exhausts aside, the S5 also distinguishes itself from the ‘regular’ A5 Sportback (the 2.0 TDI in our case) with subtle use of a brushed aluminium finish at the front bumper, mirrors and rear diffuser. You’ll also find ‘S’ branding on the S5’s brake calipers that are for all to see behind that version’s racy 5-spoke alloy wheels. Interestingly, both 2.0 TDI and S5 run on 18-inch rims, though 19-inchers are offered on cars sold abroad.

What’s it like on the inside?
You’ll have to duck a bit to avoid contact with the A5’s low roof and then it’s a fair drop down onto the driver’s seat. Once in place, the impression is of being in an A4. And that’s good and some parts not-so-good. Good because the cabin is impeccably put together with high quality everything and brilliant attention to detail. Not-so-good because it feels a bit too business-like for what is a flamboyant take on the mid-size luxury sedan. The dashboard is shared with the A4 and could have done with some A5-exclusive details.  For its part, the sporty three spoke steering wheel does help add some more flavour to the A5’s cabin. Of the two cars we drove, the S5’s cabin with its sportier faux aluminium trim made more of an impression than the drab black wood-trimmed A5. If anything, pay close attention when speccing your car.

Ingress egress is a little trickier for rear seat passengers and as a further consequence of the low roof, headroom at the back is tight for anyone taller than 5 feet 9 inches or so. There is a reasonable amount of legroom but if you want to sprawl in the back, do yourself a favour and get the A4. The rear backrest is also a touch upright and firm, and though Audi has provided a rear centre headrest and seatbelt, the A5 shouldn’t be bought for its qualities as a ‘five-seater’. The A5 does show more of its practical side when you lift the electrically operated hatchback. Boot space is a sizeable 480-litres so there’s room for a lot more than just a golf set.

Both versions of the A5 Sportback come with Audi’s friendly MMI Touch infotainment system that features a touch pad at the centre console you can use to scribble names, numbers, locations etc on to feed in commands. And you won’t need to be ambidextrous to get it right; the system can read the worst of writing with good accuracy. Also onboard is the brilliant Virtual Cockpit digital instrument cluster, Audi’s smartphone integration suite (curiously missing on our test A5) with Apple CarPlay and Android Auto and a 755W Bang and Olufsen sound system (curiously missing on our test S5). A large sunroof is also part of the kit.

What’s it like to drive?
The A5 190hp and 400Nm 2.0 TDI’s engine comes from the A4 35 TDI and it really is one of the best 2-litre diesels out there. Engine refinement is top class and the clatter at idle from the engine bay is so muted you could easily convince passengers you are piloting a petrol. On the move, the engine impresses for its responsiveness and even small taps at the throttle register with an immediate build in speed. In general, the A5 2.0 TDI feels light on its feet just as the diesel A4 does. It’s all well and good in city driving and normal highway cruising but on occasions when you adopt a sporty driving style, you’ll want a bit more from the powertrain. You’d wish the engine revved more than its 4500rpm limiter and you’d also wish the seven-speed dual clutch gearbox gave the option of letting you hold gear. Paddleshifters and tiptronic mode help keep you engaged but sooner or later, you will find yourself backing off and letting the gearbox electronics do their thing.

As on the A4, the A5 diesel engine’s power is channeled solely to the front wheels. There is a hint of torque steer under hard acceleration (0-100kph takes a claimed 7.9 seconds) and handling isn’t exciting, something which is not helped by the numb feel (even in dynamic mode) at the steering wheel. Then again, if you want an outright sporty car, it’s the S5 you should be looking at. The A5 does work well as a cruiser, some up-down movement notwithstanding, and will surprise you with how well it can take to the average potholed Indian road. There’s a pliancy to the low-speed ride you don’t expect (the tall profile tyres help here) and ground clearance is also much better than it appears to be.

You can say the same about the S5’s low-speed ride quality too which is a big, big thing. Audi’s decision to stick to smaller rims and taller sidewall tyres for India has really paid off by lending the S5 a level of everyday usability that’s often lacking in sporty cars. At high speeds, the S5 feels well tied down and better damped than the A5. The Quattro-equipped S5 also serves a greater connect at the steering but a Jaguar or BMW feelsome steering this is not. On the few tight corners we managed to find on our test route outside Jaipur, the S5 felt just like every other quick Audi. That is to say, it was grippy, predictable and confidence-inspiring, but not quite electrifying.

What is electrifying, is the way the S5 builds speed. 0-100kph takes a claimed 4.7 seconds! It’s 354 hp and 500Nm 3.0-litre twin-scroll turbo V6 engine (the last S5 was supercharged) responds promptly to commands at the throttle. There’s no lag and the way the engine punches to its 6500rpm limiter will leave you grinning. And it’s not just the ferocity of the acceleration but also the soundtrack that goes with it. Dynamic mode gets the quad exhausts singing their best with a deep rumble peppered with timely crackles and pops. The S5’s performance and noise are just what you’d expect of a sporty-looking car like the A5 Sportback.

Should I buy one?
If the rear seat headroom and low seating aren’t spoilers for you, the A5 Sportback 2.0 TDI could just be the luxury car you didn’t know you wanted. Its appeal is centred around its style, yes, but with its impressive ride quality, pleasant diesel engine and high-quality cabin, it’s also a proper alternative to the mid-size luxury sedans, Audi’s own A4 included. Sure, the A5 is pricier than like-sized rivals (the Sportback costs Rs 54.02 lakh, ex-showroom, India) but, remember, the premium will also buy you a certain exclusivity at the office/golf club/hotel parking lot.

But should you happen to be flexible on budget, we’d recommend you go all out and splurge on the S5 (Rs 70.60 lakh). It’s the version that delivers the requisite go to match the A5 Sportback body style's show and it’s the version we’d want in our own driveways.