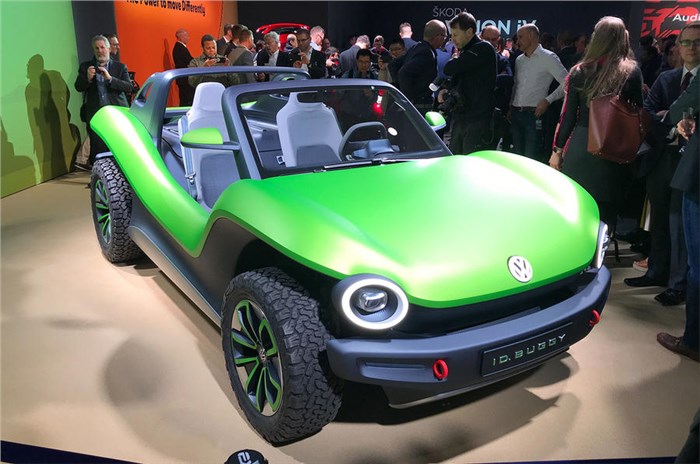 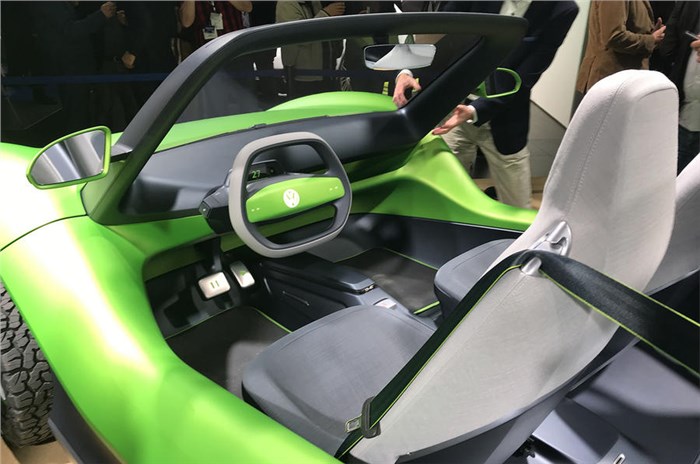 Volkswagen has revealed a new electric dune buggy concept, the ID Buggy, at the Geneva motor show. Essentially a reinvention of the 1960s Beetle-based dune buggy, the Meyers Manx, the ID Buggy Concept is built on the Volkswagen Group’s MEB electric architecture which will first be put into production with the ID hatch later this year.

The ID Buggy features a 205hp rear-mounted electric motor that puts out 309Nm of torque and offers a 0-100kph time of 7.2sec and a 159kph top speed. Power comes from a 62kWh battery, giving a range of around 250km on the WLTP cycle.

The rear-wheel drivetrain echoes the Beetle drivetrain from the original buggies, but Volkswagen has said that, as with other ID models, a motor could be fitted to the front axle to provide all-wheel drive.

The Buggy is 4,063mm long, 1,890mm wide and 1,463mm tall, making it marginally shorter, wider and lower than the ID hatch. The buggy has a 2,650mm wheelbase, a ground clearance of 240mm and sits on 18-inch wheels wrapped in off-road tyres. The concept version is a two-seater, but two rear seats could potentially be added.

The large front bumper and round LED headlights echo the Meyers Manx buggy, with the body work dropping at the sides. The front windscreen is freestanding, while the high rear-end features a Targa-style roll bar.

There are no doors, with the side dipping instead, to make for easier access and no roof. A detachable cover had been developed for the concept to protect from sun or rain. The eventual production version is likely to have a more secure detachable cover for the roof and sides.

The minimalist interior makes extensive use of durable, waterproof materials, including waterproof cloth seats with drains at the bottom to ensure water does not pool in them.

Virtually all the controls are built into the hexagonal steering wheel. A controller stalk on the side of the wheel is used to select drive and engage the handbrake. There is a small digital information screen located behind the wheel; and although there is no built-in infotainment or autonomous systems, music can be played through built-in speakers using a smartphone connected via Bluetooth.

VW design chief Klaus Bischoff told our sister publication Autocar UK that the intent of the machine is to prove that electric cars can be fun. He added that the ID Buggy will eventually be offered for sale, saying the concept presented at the Geneva show is “70 percent production-ready”.

Interestingly, the car’s mix of aluminium, steel and plastic composite bodywork is self-supporting and can be removed from the MEB chassis. Bischoff said the aim of this is to allow external firms to develop their own bodywork, with VW either providing MEB chassis or building it to those designed. “The original buggy was developed by small companies using the Beetle, and we’re excited to see what firms can come up with. There is a long history of Volkswagen cars being turned into amazing machines by other firms,” he added.

While the ID Buggy is a relatively niche machine, Bischoff said that the firm will be able justify producing it in relatively small number due because it can benefit from the economies of scale of the other ID cars on the MEB platform. There is no firm date for the Buggy to go into production; it will likely be after the more mainstream ID concepts have been revealed. Production machines based on the Cross SUV, Buzz van and Vizzion sedan will follow the hatch. Another SUV and a luxury ‘ID Lounge’ are also planned.

As well as showcasing the ID Buggy at Geneva, Volkswagen is also previewing its plans for a mobile charging station service, which it says is close to production and planned to go into service in 2020.

The system works on the principle of a power bank, similar to that used to charge smartphones, albeit on a much larger and powerful scale, with charging capacity of up to 360kWh. Volkswagen said the system will allow for charging points to be installed in temporary locations where there is demand, such as music festivals, and could potentially use recycled batteries from old ID models.