Fifth-gen RAV4 expected to go on sale in India later this year with a 218hp hybrid powertrain. 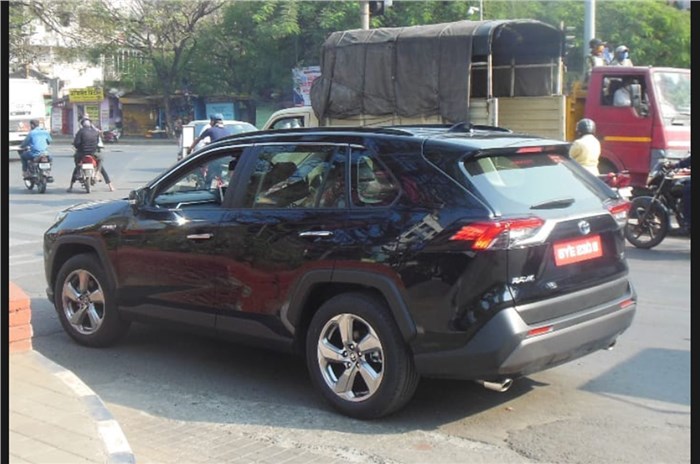 The Toyota RAV4 has been spotted undergoing testing in India. Last year we had broken the news that Toyota was considering introducing its popular SUV in India sometime in mid-2021.

A popular model in global markets for Toyota, the RAV4, currently in its fifth generation is underpinned by the carmaker’s TNGA-K platform which also underpins the current gen Toyota Camry.

The image also reveals a bit of the interior with the edge of the freestanding touchscreen visible on the dashboard.

Toyota offers the RAV4 as a petrol-only, a hybrid and plug-in hybrid model in international markets though it’s the hybrid that is expected to come to India.

Coming to the engine, the RAV4 Hybrid is powered by a 2.5-litre, four-cylinder, Atkinson cycle petrol engine paired with an electric motor to develop a combined 218hp in the two wheel drive models with the system putting out a slightly bumped up 222hp in the all-wheel drive variants.

Expected to come via CBU route

Toyota is expected to import the RAV4 to India via the CBU route under the 2,500 unit import quota which will remove the need for homologation. However, being a full import expect prices to be in the region of Rs 60 lakh (ex-showroom).