We list down the highest-selling utility vehicles in India during FY2021. 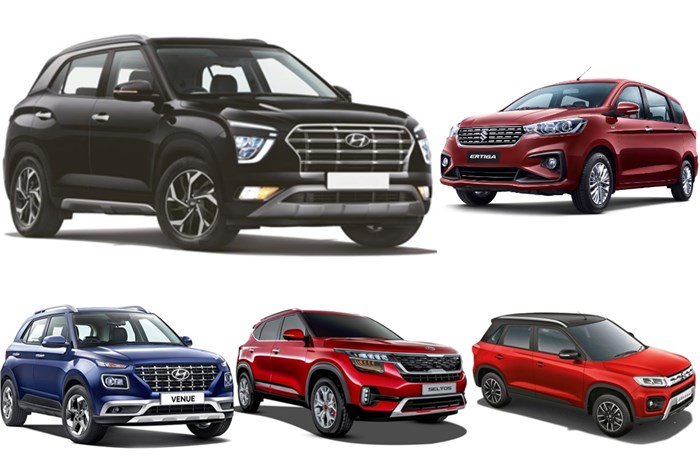 What a year it has been for the utility vehicle (UV) segment – the shining star of the overall passenger vehicle market – in what was a pandemic-impacted FY2021. Utility vehicle was the sole sub-segment from the passenger vehicle (PV), commercial vehicle, three- and two-wheeler segments to be in positive territory last fiscal. Not only that, in FY2021 (only 11 months considering April 2020 was a zero-production-and-sales month), the UV segment accounted for 39.12 percent of total PV sales of 27,11,457 units. This betters its FY2020 performance when it accounted for 34.10 percent (9,45,959) of the total PV sales of 27,73,519 units.

The consistent bestsellers were the new Hyundai Creta, Maruti Vitara Brezza, Hyundai Venue, Kia Seltos and the Maruti Ertiga. Not surprisingly, they constitute the top 5 bestselling UVs in India and accounted for 45.75 percent – or 4,85,386 units – of total UV sales of 10,60,750 units. As predicted correctly by our sister publication Autocar Professional, UV sales in India crossed one million or 10 lakh units for the first time in a single year.

A close look at Top 5 UV stats for FY2021 and FY2020 reveals that it’s the same or refreshed models but in a different order. So, come along for the number-crunching ride as we take a close look at how this five-pack has performed in the fiscal year that was.

The new Hyundai Creta, launched in March 2020, is the new UV leader, having wrested the crown from the Maruti Vitara Brezza. Right from launch, the Creta vaulted into pole position and never left it. Not only that, at 1,20,035 units in difficult market conditions, it notched 46 percent year-on-year growth (FY2020: 82,074) and catapulted from fourth rank to UV leader in FY2021.

Fuel-wise split for the Creta – 72,329 diesel and 47,706 petrol – is 60:40 in favour of diesel, indicative of the fact that the Korean carmaker’s strategy to remain bullish on diesel is paying off. The Creta’s pack of powertrains comprises 1.5-litre petrol, 1.5-litre diesel and a 1.4-litre turbocharged petrol engine. Clearly, the new BS 6-compliant diesel motor has outpaced the other two when it comes to market pull.

The importance of the new Creta to Hyundai’s standing in the market as the No. 2 player can be gleaned from the fact that, of the total 2,14,167 UVs it has sold in the past 10 months, the Creta accounts for 56 percent, with sibling Venue contributing 43 percent to Hyundai UV numbers.

The new Creta, which competes with the Kia Seltos, MG Hector, Renault Duster and Nissan Kicks, has, along with the Venue, helped drive Hyundai’s UV market share to 20.19 percent, just below Maruti Suzuki India, which has 21.60 percent.

The Maruti Suzuki Vitara Brezza, which is now available only in petrol, may have lost its UV crown to the Hyundai Creta, but to Maruti Suzuki’s credit, the compact SUV has shown grit in chalking sales of 94,655 units, in a year when the carmaker moved out of the diesel market.

In FY2020, the Brezza had sold 1,10,641 units, with 98,280 units or 89 percent of them being diesel. In what can be called strong rearguard action, Maruti Suzuki launched the petrol-engined model on February 6, 2020, and the resultant strong consumer demand shows that the carmaker is close to filling the gap left by the absence of the diesel Brezza.

The Vitara Brezza shares its 105hp and 138Nm, 1.5-litre K15B petrol engine with other Marutis like the Ciaz, Ertiga and XL6. A 5-speed manual gearbox is standard, while a 4-speed torque converter-equipped auto is available as an option. Interestingly, Suzuki’s SHVS Smart Hybrid tech is reserved for automatic versions of the compact SUV only. On the fuel efficiency front, variants with the 5-speed manual are ARAI-certified, at 17.03kpl, while the automatic, with the mild-hybrid tech, delivers 18.76kpl.

The second Hyundai model in the Top 5 list, the Venue, sold a total of 92,972 units (FY2020: 93,624), dropping one rank in FY2021. While the initial part of the fiscal saw the Venue being impacted by surging demand for the new Creta, demand picked up in the second half.

Unlike its sibling Creta, which sees customers preferring it in diesel guise, the Venue saw overwhelming demand for its petrol variants. Between April 2020-March 2021, the petrol-engined Venue was bought by 73,580 buyers, while the diesel model was preferred by 19,392 buyers. This makes for a 79:21 percent split in favour of petrol.

The recent past has seen Hyundai introduce minor updates to the Venue. In addition to the upgrade to BS6, the company has added a new ‘Sport’ trim and a clutchless manual gearbox, or intelligent manual transmission (iMT) in Hyundai-speak, to the model’s line-up. But new competition in the form of the Kia Sonet, Toyota Urban Cruiser, Nissan Magnite and Renault Kiger is already in the market.

Kia Motors India’s bestselling model is at No. 4 position in FY2021, moving up one rank from FY2020 when it sold 81,717 units. The Korean carmaker’s first product in India has felt the heat from the new Hyundai Creta and sibling Sonet too has pulled in the numbers with 63,717 units sold in its first year in India.

The Seltos has been instrumental in giving Kia a strong foothold in the Indian market and the company currently has a 14.68 percent UV market share – not bad for a 20-months-in-the-market carmaker, which is now third in the pecking order among 16 UV players, having gone ahead of Mahindra & Mahindra (14.66 percent) by a whisker.

The Seltos recently received a 3-star crash test rating in the latest round of tests conducted by Global NCAP, under its Safer Cars for India initiative. The entry-level variant of the Seltos was chosen for the crash test.

Cut to FY2021 when the petrol and CNG models between them have nearly replaced that demand. Last fiscal, the petrol Ertiga sold 56,795 units and the CNG Ertiga went home to 31,776 buyers – this makes for a petrol:CNG split of 64:36 in favour of petrol.

Despite the ongoing challenging times, the future looks bright for the UV segment, what with a gaggle of new products already have been launched and some new ones on their way. In sync with the global trend, demand continues unabated for compact SUVs and most manufacturers are putting their shoulder to the UV wheel.

Also, like their passenger car brethren, consumers are fast making the shift to petrol-engined UVs. Demand for diesel UVs has dropped sharply – from 64 percent in FY2020 to 40 percent in FY2021.

Expect FY2022 to be a year when there will be a glut of SUVs rolling into the market. Having an SUV or two in your PV arsenal is a must if a manufacturer has to succeed in India, and that’s just what is happening. Demand for sub-4m compact SUVs seems insatiable and carmakers are going all out to introduce new products. The coming months will see a number of new models getting introduced, including the likes of Mahindra’s new XUV700, Skoda’s Kushaq, Volkswagen’s Taigun and Hyundai's Alcazar.

Tata Motors is aggressively driving its growth strategy, and Korean carmakers Hyundai and Kia, who between them have 34.87 percent of the UV market, will be looking to further up the SUV ante. Meanwhile, Maruti Suzuki is unwilling to lose any ground. Any which way you see it, it’s an exciting time for the segment and UV aficionados.